I'm trying to design a Full-Bridge which can handle upto 330 A (@ 12V). I'm paralleling 3 MOSFETs per leg, and I think I've found a low enough RDS(on) MOSFET to make this somewhat practical. Here's a schematic of the parallel MOSFETs in Half-Bridge configuration: 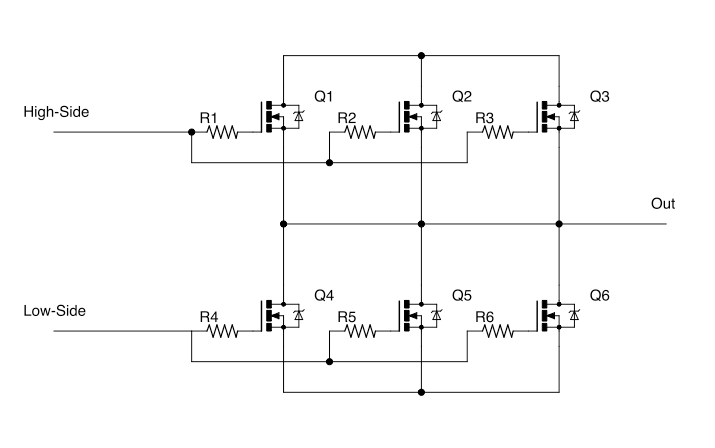 All transistors are AUIRF1324S-7P and each resistor in the above schematic can be assumed to be about 5Ω. The power dissipation in each MOSFET for 111A is 20W. I am managing this heat by a surface mount sink and a fan. I've written how I arrive at the 20W figure below, in case it matters.

My main concern now is switching losses. The max. total gate charge of the MOSFET is 252nC - so for each leg the total gate charge becomes 756 nC (3*252 nC). If I use a run-of-the-mill driver with 2 A output capability, the switch on time is t = Q/I = 750 nC/2 A = 375 nS! My guess is that I will have a lot of switching losses if I drive my MOSFETs this slow. This is where I'm confused: what do I need to do switch these MOSFETs faster? Use a higher current rated driver?

Assuming I use a 5A rated driver, the time becomes 150 nS. At a frequency of 30KHz, will a switch on time of 150 nS present significant switching losses? If so, suppose I go with even higher rated current driver, how do I ensure that my source (a 12V Lead-Acid batt.) is able to handle current spikes upto 10A?

Essentially, my question boils down to: if 150 nS presents significant switching losses at 30KHz, what do I need to do in order to drive my FETs even faster?

Of course, this all assumes there are no gate resistors! The gate resistor will slow down the switch on even further! But most of the papers on Parallel MOSFETs suggest gate resistors are necessary to prevent ringing.

There are many losses associated with switching, but it sounds like you are most concerned about the additional thermal load introduced into the MOSFETs in the period transitioning between on and off. I thought it would be easy to find some application notes on this, but surprisingly it wasn't. The best I found was AN-6005 Synchronous buck MOSFET loss calculations with Excel model from Fairchild, the relevant parts of which I'll summarize here.

During the switching transition, the voltage and current in the MOSFET will look approximately like this: 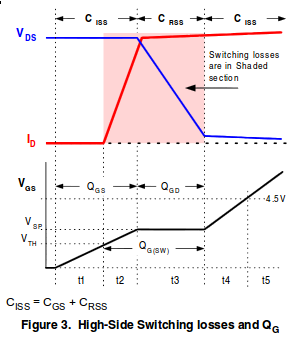 The switching losses we are going to calculate are those in periods \$t2\$ and \$t3\$ due to the voltage and current in the MOSFET. The way to approach this is to calculate the energy of each transition, then convert this into an average power according to your switching frequency.

If you look at just \$t2\$, \$V\$ is nearly constant, and \$I\$ increases approximately linearly, forming a triangle. Thus, the power also increases linearly, and the total energy is the time integral of power. So the energy is just the area of that triangle:

\$t3\$ also forms a triangle. In this case, the voltage is changing instead of the current, but still the power makes a triangle, and the calculation of energy is the same.

Since the calculation is the same for \$t2\$ and \$t3\$, then it's not really important how much time is spent in \$t2\$ vs \$t3\$; all that really matters is the total time spent switching. The energy losses from one switch are thus:

And, your switching frequency is how many times per second you incur this energy loss, so multiplying the two together gets you the average power loss due to switching:

That's \$8.91W\$, ideally, shared between three transistors, so only about \$3W\$ each, which is pretty insignificant compared to your other losses.

This number can be checked for sanity with a simpler model: if you spent \$150ns\$ switching, and you do it \$30000\$ times per second, then you can calculate the fraction of the time you spend switching, and make the most pessimistic assumption of the full power of \$12V\cdot330A\$ being lost in the transistors:

Of course, over the switching period, the average current and voltage is only half that of the maximum, so the switching losses are half this, which is what we just calculated.

However, I bet in practice, your switching times will be slower. A "\$2A\$ gate driver" isn't a constant current source as these calculations assume. The real picture is rather more complicated than this simple model. Additionally, the current will be limited by the resistance, and usually more significantly, the inductance of the transistor packages and the traces leading to them.

So, I would say that these calculations show that your switching losses may be manageable, though you won't know for sure until you've made the layout and tested it. Even if you can't reach the ideal of a \$150ns\$ switching time, the losses are low enough relative to your other problems that you have some margin to do worse and still function.

Your bigger problem is probably getting the three MOSFETs to switch at the same time. Otherwise, one of them will get a disproportionate share of the total current, and thus heat, leading to premature failure.

This is a lot of current to handle. You don't say here what the full bridge is driving, so I'm thinking a transformer followed by a diode bridge and then to the LC filter and load. I'm also going to assume the bridge is just chopping at 50% for each leg.

I think you may be being a little conservative with the conduction losses, because each FET will have at most a 50% duty cycle. For the AUIRF1324 conduction losses with 110 amps per FET you would expect:

You can make an estimate of the switching loss (of each of the top FETs) by using:

Gate switching loss for each FET would be:

Easiest way to drive the FETs will be to use an H-bridge driver like an LM5104. Whichever gate drive you use, it will need to be located as close as possible to the FETs to minimize gate circuit inductance (\$L_g\$). Gate circuit resistance \$R_g\$ + \$R_{\text{driver}}\$ will need to be no less than \$\sqrt{\frac{L_g}{C_{\text{iss}}}}\$ to prevent gate ringing.

When you parallel the FETs make sure each has its own gate resistor.

One more thing to think about

What do I need to do in order to drive my FETs even faster?

The high-side FETs - these are source followers and I'm presuming it's because you can't find a P channel that does the job. A little bit more care needs to be taken driving these because the source is following the output. I'd be tempted to use a transformer to provide an isolated supply for those FET drivers and use a really fast transformer for transferring the drive signal up to that circuit. Again, taking the gate negative when turning off is needed I believe. 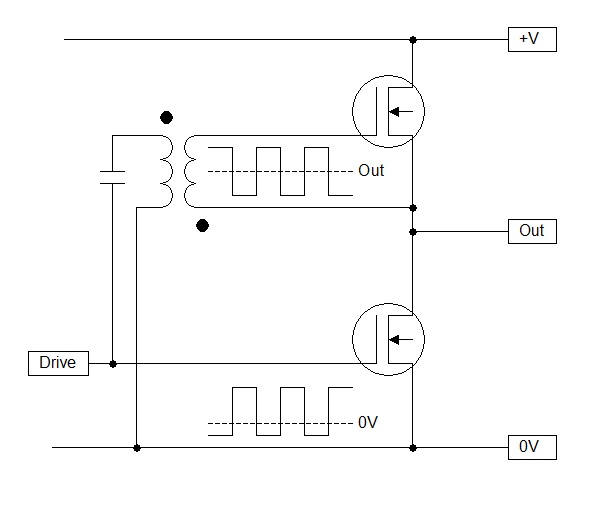 How do I ensure that my source (a 12V Lead-Acid batt.) is able to handle current spikes upto 10A?

How will this source handle the 330A is my question? Current spikes are solved with really high grade capacitors close to the FETs and good layout practises.

Good luck on this and don't worry about burning your fingers!!

What's letting you down here is the speed of the rise time(Tr) of the AUIRF1324S-7P which is a massive 240ns.

I can think of a MOSFET that's in a package that can handle 240A, is silicon limited to 1000A, so any 5ns switching time where one FET is on before another will not damage the junction. It retails for less than $5 each on outperforms the AUIRF 5 fold in all speed measurements. You would only need two together to produce 500A.

You should check the actual gate current source graphs for the drivers because some that are averaged rated at 2.5A in the brochures have maximum ratings of 3.8A at Vgs max

Many of the drivers rated for 2A were only managing a max of 1.96A at Vgs max

Not the answer you're looking for? Browse other questions tagged power mosfet power-electronics or ask your own question.

23
What is killing my MOSFETs
8
Need help choosing H bridge driver
6
driving low side of a mosfet bridge with 3.3V