A thermal relief pad is essentially a pad which has fewer copper connections to a plane (such as a ground plane).

A normal pad would simply be connected in all directions, with the solder mask exposing the area to be soldered. However the copper plane then serves as a giant heatsink which can make soldering difficult, because it requires that you keep the iron on the pad longer and risk damaging the component.

By reducing the copper connections, you limit the amount of heat transmission to the plane. It follows of course, that with reduced copper conduction paths, you also have greater electrical resistance. The increase in resistance is marginal compared to the reduction in thermal conductivity.

This should not be a concern unless the pad is carrying high current such that the four traces (on a standard thermal relief) together are insufficient to carry the current; or if it is for high frequency signals where the thermal relief may cause unwanted inductance.

Just to show a visual on normal vs thermal relief pads: 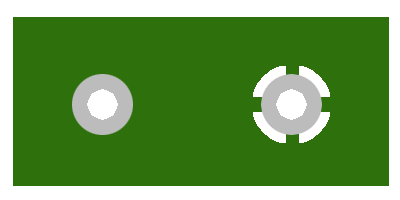 The pad at left is connected to the copper plane (green) in all directions whereas the pad at right has had copper etched away such that only four "traces" connect it to the plane.

Just for fun, I used a trace resistance calculator to estimate what the electrical resistance difference might actually be.

Consider the thermal relief pad. If we assume the four "traces" to be 10 mil wide (0.010") and approximately 10 mil in length from the pad to the plane, then each of them has a resistance of about 486μΩ.

The four "resistors" in parallel would give us a total resistance of :

If we approximate one empty space created by the thermal relief to have the equivalent of about three such traces, giving us 16 in total:

The thermal properties, on the other hand, are significantly different. I don't know thermal conductivity formulas very well, so I won't try to calculate it. But I can tell you from experience that soldering one versus the other is highly noticeable.

An additional benefit to the use of thermals is when you need to remove a component from a PCB for replacement or other reasons. It is way more difficult to desolder a lead that is soldered to a pad that has no thermal relief but is tied to a plane or pour. Any person reworking a board that you have designed will appreciate your thoughtfulness for using thermals. In RF work the inductance of the thermal spokes will be negligible until you get to frequencies that are really high, 10s of Gigahertz or better, where markedly different methods of hooking things up are used and vias are mostly used to tie ground planes together (spaced less than one wavelength of the frequency expected apart and stitched all around the periphery of the plane or pour) not to route signals through. (You can always find exceptions to any "rule" if you try, but the last sentence is generally true.)

There are exception to every rule. Good question. Good answers above. I generally use "direct connects" for via and pads to planes. Except if there is a through hole component that needs to be soldered. So for through hole components like connectors, resistors, capacitors etc, if they're connecting to a plane, use a thermal relief. Note a large trace can become a "thermal plane". For SMT components, I use "direct connects" because, I assume, the board is being assembled with reflow in an oven. The oven controls the temperature of the entire board, so a thermal relief doesn't aid in assembly. I don't recommend hand assembly of SMT for reliability reasons. Its relatively easy to crack a capacitor hand soldering it. Even for trained assemblers. Repairing is a secondary concern. Most often the board is scrapped. Or should be.

Not the answer you're looking for? Browse other questions tagged pcb resistance or ask your own question.

20
Why thermal reliefs on vias?
6
Can I connect all ground connectors via the ground fill?

5
Kelvin "4 Wire" Resistance PCB Design Questions
1
Vias in footprint with no thermal relief?
4
When to use thermal relief and when not to
2
Use Thermal Relief in High Current Traces?
1
Is there any PCB design software/extension that can do automatic components placement?
0
Fundamental Questions about Voltage and Resistance
0
Thermal Resistance, PCB Operating Temperature and PCB Self Heating
1
Altium Polygon Pours (and thermal relief): A Better Way?