How does a ferrite core wire terminator work to reduce EMC?

The following question was asked on superuser: What is that cylinder on cables?

How does that cylinder work? As far as I can tell, even if you put one on either end of the cable, any HF signal should travel straight past it.

Is there an equivalent circuit that shows the principles better?

I was assuming in my question that the wire passes through a ring made from ferrite. There is of course the other possibility that it loops around the ferrite, creating a (very small, very low inductance) inductor in series with the cable. Is that so?

First, why does reducing common mode currents reduce radiation? If you have two parallel wires that carry equal and opposite currents, that is, no common mode currents, then at distances significantly more than the distance between the wires, the electric and magnetic fields created by the wires cancel. Thus, there is no net field, so there can be no radiation. See twin-lead transmission line. 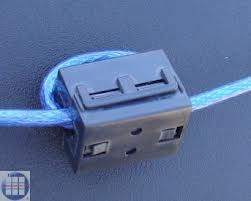 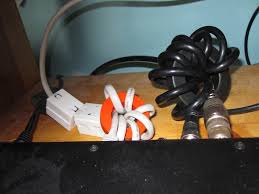 but since the cables involved are often bulky, and it's hard to do with automated machinery, it's usually easier to just use a bigger core:

So schematically, a pair of wires passing through a ferrite looks like this:

Let's just look at half of this in isolation, just A. Any current in A will induce a magnetic field in the core, just like an ordinary inductor. Thus, you get an increasing impedance with increasing frequency, just as you would with any inductor.

The same is true of B, in isolation. But, if \$I_A = -I_B\$, that is, the currents are equal and opposite, the magnetic field induced by each current exactly cancels in the core. If there's no magnetic field, then there's no inductance, and so no added impedance.

On shielded cables, the ferrite accomplishes the same thing, although in a slightly different way. Ordinarily, high frequency signals traveling on a shielded cable will be forced to travel on the outside of the shield by skin effect. However, if there is current in one direction of a conductor inside the shield, then the return current on the shield will be drawn to the inside surface of the shield. It is, in effect a Faraday cage, but in this case we are keeping fields from the inside from getting out, rather than fields from outside getting in. See coaxial cable.

However, this only works if there are exactly equal and opposite currents on the shield and the conductors in it. Any shield current not balanced by internal conductor current will travel on the outside of the shield. If a ferrite is clamped around the cable, then this forms an inductor. But, this inductor is only seen by currents on the outside of the shield, and these are the currents you don't want, because they exist only when there are common-mode currents, and they are the only currents that have a field external to the cable, and thus the potential to radiate. 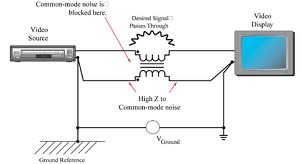 The ferrite material used in these things present a high impedance to high-frequency (MHz and up) common mode noise, which is why one usually sees them on DC power cables and on ribbon cables carrying relatively low frequency signals. 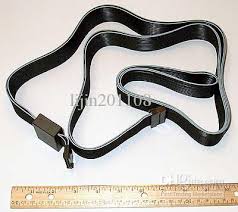 Not the answer you're looking for? Browse other questions tagged cables emc ferrite or ask your own question.

0
Coaxial DC power cable for switching AC adapter required?
1
Equivalent model of my (real) transformer
4
Question on EMI filtering
4
Will winding a single DC cable on a spool cause any issues?
3
What types of cables do ferrite beads/chokes have a beneficial effect on?
2
Shielding powerful HF EMI