I am using Eagle CAD to lay out a BGA based PCB, for manufacture at Laen's prototyping service. One of the problems which I am having is that BGA parts are typically specified using metric units (for example the ball pitch is .8 mm), but that several other parts on the board (and actually the specifications for the PCB DRC) are given in Imperial units (for example, the minimum trace width is 6 mils, and the minimum hole size is 13 mils).

How do people reconcile the differing systems? For example, if I route things on a metric grid, connectors which have .1 inch spacing no longer align nicely to the grid. Alternatively, if I use a mil grid, I cannot place a via precisely in between 4 BGA balls.

I don't know Eagle specifically, but if it's like the tools I know, it has a "hotkey" to quickly switch back and forth between units. And another hotkey to switch grids.

What's usually done is to set up two (or more) grids, and use the hotkey to switch between them. While routing the BGA, use the metric grid. Once you get your line routed out of the BGA region, hit the hotkey to switch to the imperial grid. Jog the line over to the new grid, and route it wherever it needs to go.

Most layouts aren't routed strictly on a grid anyway. You can just route lines as close as the design rules allow, without worrying about a grid (assuming low speed digital signals, where you aren't worried unduly about cross-talk). Some tools have special routing modes to make this easier, for example by having a new line follow an existing one. Or by "shoveing" the old line out of the way to make just enough room as you route the new line.

This is to further elaborate @ThePhoton's answer. 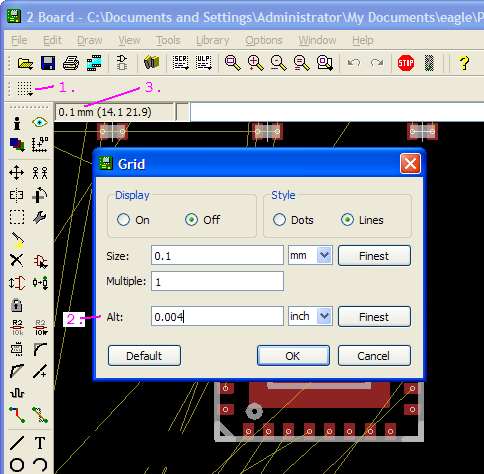 Not the answer you're looking for? Browse other questions tagged pcb eagle units or ask your own question.

2
PCB (Auto-)Routability
19
Is it safe to design board at fab houses minimum trace width?
2
EAGLE CAD: Push aside traces by DRC clearance
1
Eagle Cad: change default drill size list
2
Advice on precision CNC milling machines for PCB prototyping
2
What is the recommended trace width for this TI ZHH 144 BGA package?
4
How to prevent tombstoning using via-in-pad with small SMD discretes
5
Bypass caps under BGA: Should I isolate vias from planes?