First IC's and how they were produced

My question is this one, how the firsts ic's were produced.

The first IC was produced by jack kilby: http://en.wikipedia.org/wiki/Jack_Kilby

Now exists advanced machines, that do all the work. From cutting the wafer to make the ic.

I would like to know what type of machines they used to fabricate the IC, what techniques they used, etc.

If someone could explain me i would be very grateful

The first thing to realize is that the first integrated circuit was not a very complicated circuit. It maybe had one or two transistors, a few resistors, and a capacitor or two.

My evidence is a photo of the first IC at Wikipedia: 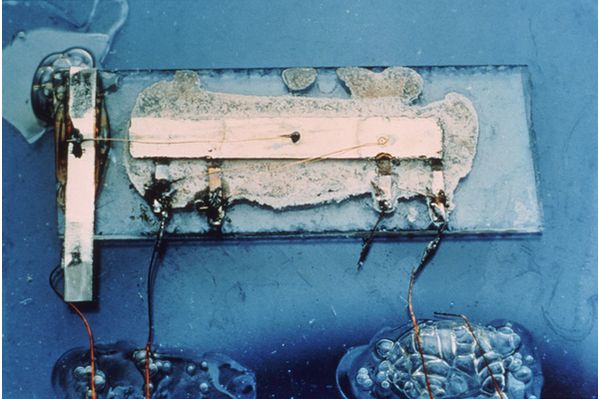 You can see there's only 4 or so contacts to the circuit. Kilby's 1959 patent also indicates this level of complexity, although several different "realizations" are shown and its not clear which of these was actually made first.

And using the microscope slide that the chip is mounted on for scale, you can estimate that the size of the components is likely in the millimeter scale, not the submicron scale of current ICs.

The patent does give some information on how the circuit was made: 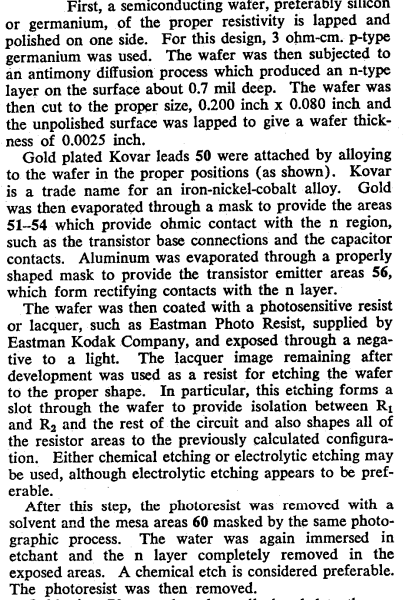 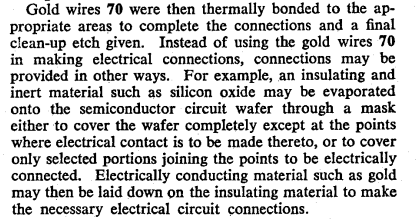 This shows that the diffusion was done uniformly over the whole wafer. The Kilby patent also refers to a Bell System Technical Journal article from 1959 that gives more details on how individual transistors were fabricated at that time. Kilby would have done his diffusion steps using a reactor designed for manufacturing individual transistors.

Different devices were isolated from each other by etching through the diffusion layer. Given the scale of the devices, the photolithography steps to define the etched shapes could probably have been done with ordinary photographic equipment.

57
How are integrated circuits fabricated?