shorting a remote control pushbutton with GPIO and a transistor

I'm trying to control my garage door remote with a GPIO pin from my Raspberry Pi. Instead of driving a relay, it would be much easier to just short the pushbutton on the remote. Is this how I should do it? Do I need a protection diode and if so, where should it go?

Does it matter that the 3.3V GPIO pin is referenced to a different ground (Raspberry Pi ground) than the remote ground?

Would also appreciate guidance on transistor to use and resistor value.

UPDATE; More info from comments by OP: After checking, you're right, the pushbutton simply shorts the circuitry to the return path of the 9V battery. My main concern is the 3.3V being referenced to GND while everything on the remote is floating.

To eliminate any possibility of surprise, and to generally make things more robust, I'd suggest using an optocoupler like 4N25. 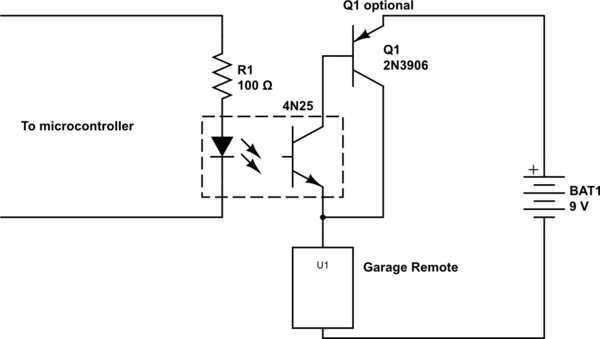 With this arrangement, you don't need to worry about how to combine the separate grounds of the two systems, because their grounds simply aren't connected. Also, if there's a problem on either end, the optocoupler may isolate the fault to one side, and is cheap to replace, where a Raspberry Pi or garage remote is not.

Depending on exactly what the garage remote is, you may need to add another transistor to handle additional current, because the 4N25 has an absolute maximum of 50mA. Q1 is one way to do that, and general PNP transistor you can find will work in this application. This arrangement formed by Q1 and the output transistor of the 4N25 is called a Sziklai pair.

One potential disadvantage of this solution is that when the transistor is on, the remote (represented by U1 here) will see only about \$8.2V\$, where it would have seen the full \$9V\$ had these transistors been replaced with a mechanical switch. This is because you lose \$0.6V\$ from the emitter-base drop of Q1, and another \$0.2V\$ from the collector-emitter drop of the 4N25. However, I doubt this will be a problem in practice.

Right idea, wrong execution. Assuming your diagram of the remote is correct (I have no way of verifying and there could be a lot of different configurations), you want to use a PNP transistor. The NPN as emitter follower that you show won't work because the blue block will only see the 3.3V digital level minus the B-E drop.

That leaves a problem as to how to turn on the PNP. Here is a simple way:

Q2 will sink about 2.7 mA when the digital signal is high. Figuring Q1 should have a gain of at least 50, that will allow the block to draw up to 130 mA, which is probably a lot more than a garage remote draws. Adjust R1 accordingly if more current is needed.

However, are you really sure the button simply applies power to some block? That could make sense if there was only a single button, but is probably incorrect if there are two buttons, like open and close. My first guess would be that power is always applied and the button shorts some line to ground, although there could be a lot of different configurations.

You now say that the pushbutton doesn't turn on power to the unit, but shorts some line to ground. That makes more sense. In that case, this circuit should work:

The grounds of the remote and the computer need to be tied together, but there is no problem with that. The remote is a single isolated device, so there is nothing wrong with tying one of its nodes to some external reference. I see that others are making a big deal of this, but that is silly. There are cases where you want to isolate a switch like this, but when the device itself is arbitrarily floating as it is in this case, adding isolation is just a knee-jerk reaction or to satisfy religious beliefs.

The idea behind your circuit is fine, the implementation requires some improvements:

You have two choices, I like the left circuit best:

There are really lots and lots to choose from. Depending on your geographic location other part numbers may be more common. Just walk in a shop and ask for an equivalent of the ones mentioned above.

The resistor can be pretty much anything around 1kΩ-10kΩ\$ and 250mW carbon film or better. Similar price as the transistor in regular retail.

First, yes, the grounds need to be connected together if you're using direct galvanic connections like a transistor. An optocoupler is probably safer.

Second, why worry about the remote? The garage door opener should have a manual trigger, which is just a regular pushbutton on a wire. You can drive this with a transistor, or with a small relay that you in turn drive with a transistor or optocoupler.

Not the answer you're looking for? Browse other questions tagged transistors raspberry-pi gpio or ask your own question.

11
What is the name of the protocol(s) used to let an automatic garage door opener know which button I've pushed on the wall control panel?
1
Low component count isolated contact closure without power on the remote side
0
How to trigger a physical button on an external device with a Raspberry Pi's GPIO by shorting the circuit
0
How can I close a remote controller switch with an optocoupler and a Pi?

1
Close circuit after a couple of seconds
0
Best way to control power with MCU gpio pin
1
Using Raspberry Pi to read open collector outputs from tally connector
0
Shorting a remote control push button with GPIO and a transistor potential conflict?
3
High Side switching Raspberry PI with 3904 and 3906 transistors
1
Possible reasons for differences in voltage between garage opener circuit and Raspberry Pi
2
is this level shifter a dud or am i doing something silly?
0
Raspberry Pi Pico 3.3V_EN pin control voltage inquiry