Did a survey of the commercial products available in the local market, which are broadly classified as 'Automatic Water Level Controller' or 'Automatic Pump Controllers', and found that all of them use a float-switches.

This got me wondering as to why the commercial products do not use 'electrical conductivity' of water as a test, to determine water level in the reservoir. If one uses something like 12VDC of periodic pulse to check for conduction via the electrodes at various levels, there should be no worry of electrical shock. So why don't the commercial systems use this, extremely inexpensive solution ? What is it that I might be missing ?

To add a bit of context, what surprised me in my survey was that the price of spare float-switches was about 20% of the price of entire system (including 2 float switches). The cost of installation is about 2x the system price. And every time the float-switch is to be changed there's some labour cost as well (unless the unit is under an Annual Maintenance Contract, which cost 15-20% of the unit price). This is in a rather price sensitive market (India). Which is why the super simple "conductivity" test, seemed like a very cost-effective solution.

Well ... float switches are simple and reliable. Having said that, it is not quite as simple as detecting a DC voltage. Using DC, the electrodes would quickly be corroded (damage due to electrolysis).

The sensing circuit needs to use AC. There used to be a nice IC made by National that would do this, the LM1830N; but as far as I know it is has been obsolete for some time. The circuit is pretty simple to do yourself. Basically an oscillator is connected to a series resistor and capacitor which is connected to an electrode in the fluid. That electrode also connects to a comparator to sense the AC. A second electrode connects to GND (circuit common). When a fluid is present, the conduction between the electrodes causes the AC signal on the oscillator electrode to be attenuated. The resistor sets the sensitivity. 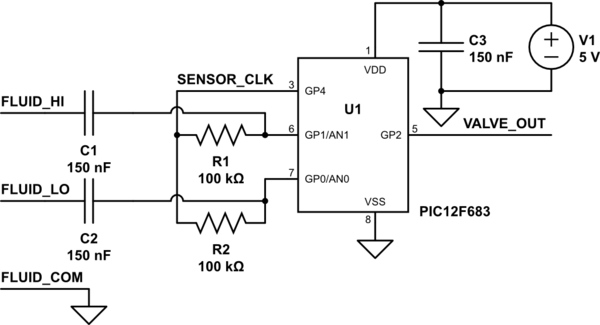 I'm afraid I'm not free to publish the source code, but I will describe the functionality:

SENSOR_CLK is a 50% duty-cycle square-wave output. The frequency is not critical. I used appx 8Khz.

The AN0 and AN1 inputs to the PIC12F683 are inputs to the A/D converter. The conversions are performed when SENSOR_CLK is high. If the voltage is sensed below 3.1V, the corresponding electrode is considered to be immersed in the fluid.

When the wires are immersed in the fluid, the square-wave detected by AN0 and AN1 is attenuated and has a net DC component of about 2.5V. Resistors R1 and R2 may be changed to smaller values if a less sensitive circuit is desired. The 3.1V detection threshold (in firmware) may also be changed to adjust sensitivity, but it must be greater than 2.5V.

While I used the A/D converter in the microcontroller, other detection methods may be used. Some microcontrollers have built-in voltage comparators that may be used. It may also be possible to use general-purpose I/O to detect the immersion when SENSOR_CLK is low if the Vin high and low thresholds are well below 2.5V.

Water is a poor conductor. If there are salts dissolved in the water, then it's a better conductor, but these salts can then also build up on the sensor as the water evaporates from it, which interferes with the sensor's accuracy. It's also difficult to positively tell the difference between a sensor that is submerged, and one that was recently submerged but is still wet.

Float valves don't suffer from these problems. They work on very pure water or even fluids that aren't water at all. They provide a very positive indication of "submerged" or "not submerged" that is independent of the purity of the fluid being monitored or evaporation. While they introduce mechanical components which may fail, they are widely available and easily serviced by people who may not have advanced electrical knowledge.

I realize this is a year old but I was all over looking for answers for an old cooling tower and had this open when I found a place called Waterline Controls that sells 'electronic sensors' (plus software driven controllers that look trick).

They also have good information about all types of water sensors, pros and cons, etc.

They said "Poor water quality can cause the probes to foul, deteriorate or pit, needing to be replaced after one to two years. “Throwaway Technology” with a short life cycle..." ('read more' link goes to www.waterlinecontrols.com/level-sensors/conductivity-probe/).

Their stuff is totally different and well worth looking into if you need a better soulution. They have some major installs listed too, like at google and a nuclear plant, so it certainly works well.

Not the answer you're looking for? Browse other questions tagged sensor water level or ask your own question.