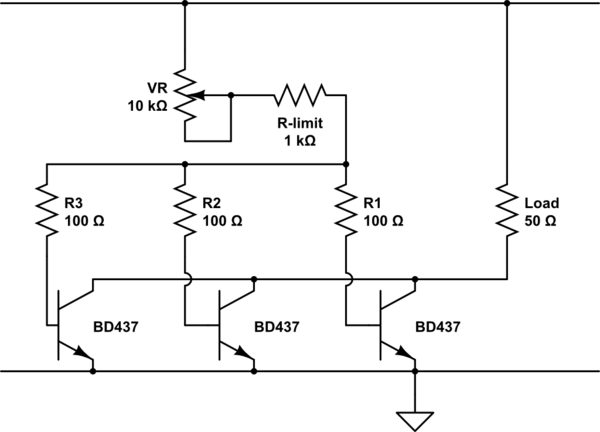 Edit: Actually I would remove R-limit, and have VR stretch across the rails, with the wiper connected to R1-R3

This is actually a very common technique to do, both with BJTs (traditional transistors like drawn above) and MOSFETs. With BJTs, you don't need to bother with separate trimmed base resistors, all you need to do is add current sharing resistors or sometimes called ballast resistors. Look at this page for instance, the first one I found with google that explained this design:

If you use MOSFETs, you don't need the current sharing resistors at all, they can just be parallelled 'out of the box'. MOSFETs have negative feedback 'built in': if one MOSFETs gets a larger share of the current, it gets hotter which in turn increases its resistance and reduces the amount of current going through it. This is why MOSFETs are usually preferred for applications where multiple transistors in parallel are required. However, BJTs are easier to built into current sources as they have fairly constant current gain.

For an application where you need to parallel transistors and control current in a linear fashion (not switching the transistors fully on and off), BJTs are your best bet. As Olin Lathrop says, the circuit will need to have resistors in series with the BJT emitters to help balance current. 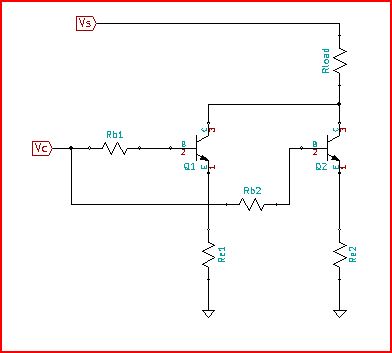 Re1 and Re2 will help balance current between BJTs. The problem is that Vbe has a temperature coefficient (\$\gamma\$) of about -1.6mV/C. As the parts heat up, Vbe will reduce allowing more base drive to the transistor from the fixed value of Vc. With a first order model of Vbe's change with temperature, a simple equation for current in Re1 is:

Of course \$\beta\$ will vary with temperature too, but that should be much less important. 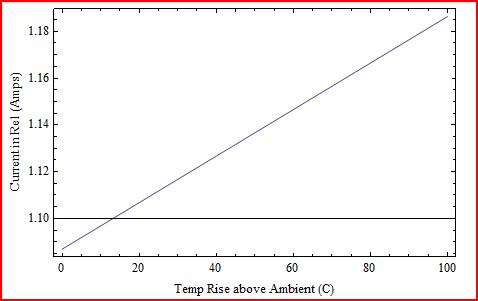 So, with Re1 of 1 Ohm, there is about a 10% change with 100 degrees of temp rise. The emitter resistors in this example would have up to about 1.5W in them. Lower values could be used, but then the variation would be greater. Operation of Q1 and Q2 would mostly be independent except for Vc and voltage across Rload.

While MOSFETs are very good for paralleling in switched mode of operation, they will not share current in linear operation. This is because the gate to source threshold voltage (\$V_{\text{th}}\$) has a negative temperature coefficient. As device temperature rises, \$V_{\text{th}}\$ becomes less, so the warmer the part the earlier it will start to conduct (Micro Semi has an app note about this). Here is a chart of the transfer characteristic to illustrate. 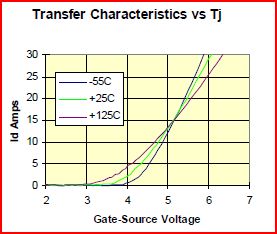 You can see how \$V_{\text{th}}\$ lower as \$T_j\$ rises. This also means that for low drain currents (about 5 amps or so in the chart) transconductance (\$g_f\$) will effectively be higher for the hotter part. Parallel devices will not start to share current until past the crossover point shown on the chart at about 15 amps. It is unusual for FETs operating in linear mode to ever get to the crossover point.

This is even a problem within a single MOSFET. Hot spotting on a MOSFET die is a well known phenomena. If you pop the top of a MOSFET and pull up a microscope, you will see thousands of cells on the die that are parallel micro MOSFETs. Each micro FET has its own \$V_{\text{th}}\$. So, for a fixed \$V_{\text{gs}}\$ and linear operation, the cell with lower \$V_{\text{th}}\$ will start to conduct first and heat up. \$V_{\text{th}}\$ will drop and that cell (and those around it) will conduct more. A hot spot will develop. It is possible for the device to be damaged in this way. On-Semi covers this in app note AND8199 (Hat Tip to Phil Frost).

If sharing between cells on a die are poor, imagine how bad sharing will be between separate devices with not well matched \$V_{\text{th}}\$. Remember how Vbe of the BJT changed by -1.6mV/C? Well \$V_{\text{th}}\$ of the FET changes by about -3mV/C, about twice as much as the BJT. So, current imbalance between paralleled FETs in linear operation will be much worse than BJTs (and they are bad enough).

Paralleling linearly controlled MOSFETs for current sharing means having a feedback loop for each device.

Your circuit as shown is not a good idea because all the transistors won't be equal. There can be significant variation in gain from part to part, and the B-E drops won't match exactly either. To make matters worse, the transistor that ends up taking the most current will get hottest, which makes its B-E drop go down, which makes it take more current ...

The simplest way to get around this with bipolar transistors is to put a small separate resistor in series with each emitter. You have a 50 Ω Load, so 1 Ω emitter resistors should be fine. Now you tie all the bases together direction.

When a transistor carries more current than the others, the voltage accross its emitter resistor will go up. This reduces its B-E voltage relative to the others, which gives it less base current, which causes it to carry less of the overal output current. The emitter resistors basically cause some negative feedback that keeps all the transistors roughly ballanced.

Not the answer you're looking for? Browse other questions tagged transistors parallel npn or ask your own question.

3
Parallel MOSFETs to get more current (40A adjustable current source)
5
Why is voltage gradually increasing from the source of a power MOSFET?
2
How to adjust linear voltage regulator equivalent?
0
Light intensity is dropping on large LED bulb display when it sequences
-1
Resistance calculation for transistor base
0
Correct complementary feedback pair output stage with multiple devices

0
Can I use a single SPST switch and transistors to simulate a DPST switch for POS and GND wires to a load?
5
Parallel Transistors in Constant Current Load
4
Is the current gain value constant for a single BJT ?
3
Transistors on opamp power rails
2
can I build a multiplexer with just four transistors?
0
Proper BJT transistor calculation
0
Transistor - Saturation and Active Regions
0
Constant current LED driver using transistors
0
Identifying transistors