Reducing the tolerance of resistors manually

All the resistors available come with a finite amount tolerance. This is undesirable particularly in highly sensitive systems. While we can use resistors with the least tolerance available, I want to know if there are any methods (something like designing a special setup to bring down the tolerance) using which we can manually reduce the tolerance value to the minimum that we may require?

Tolerance is a statistical abstraction which tells us how much variation to expect from a sample of resistors of a given type. A single resistor doesn't have tolerance: it has a value, which deviates to some extent from the stated value (and of course varies with temperature). We cannot change (manually or otherwise) a property that a part doesn't have.

If part of a circuit requires a very accurately set resistance (which perhaps has to compensate for variations in other parts, and so cannot be a fixed value, no matter how precise), we can use a potentiometer. A potentiometer or rheostat is a resistor whose value you can manually change.

A useful trick is to use a fixed resistor for most of the resistance, and a smaller-valued potentiometer just for the adjustment. For instance, if we wanted to adjust 100K within a +/- 5% range, we could get a 95.3K resistor (E48 series number), and a 10K potentiometer wired as a rheostat in series with that resistor.

If you were to purchase say 1000 resistors and accurately measure their resistance values you may be able to find a few resistors that are closer to the actual value required. These selected resistors will effectively be very close tolerance resistors - even if they started life being bunched together with a lot of similar values. How 'close tolerance' they are would depend upon your test equipment.

Statistically speaking, however, there are no guarantees that within any sample size you will find exactly what your looking for.

You cannot reduce the tolerance of a resistor in this way, because Tolerance in this context, means fixed value from manufacturing. A given 10% resistor, given a steady current within a steady temperature range, will not swing from -10% to 1% to +10%, it will stay the same. (This goes out the window with time or with heat damage.) The Resistor tolerance simply means that the resistor should be within that range of the given value.

What you can do is part matching, where you test and measure multiple parts to find ones that are closely matched to each other. With the same 1k 10% resistor from above, you could find enough 930~950 resistors that they are essentially 940Ω 1% resistors. Not standard value of course, but given the small difference from the labeled value, it's an insignificant amount of current change. This is good enough for any situation where you need matched pairs, not precision value (Same goes for leds, the amount of brightness of an individual might not matter compared to making sure a set of ten leds have the same color and relative brightness.)

The OTHER OPTION though, is a bit more involved. Not complicated, but requires manual changes. This has been done for decades, especially if precision, non-standard values are needed. With carbon-film resistors, you take a file, and slowly break through the outer material and remove a tiny amount of the resistive material. This can increase the value, so that 1k 10% resistor that measures 950Ω can become 980Ω or 990Ω or exactly 1000Ω. You then use clear nail polish to seal it back up. This is what you were really asking about. 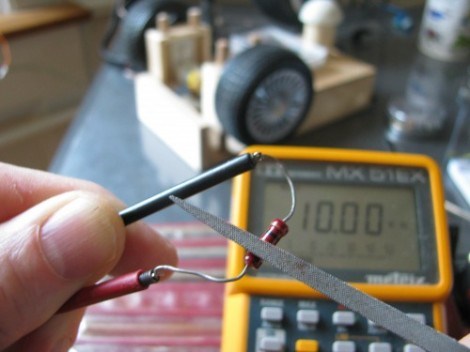 For example, if you didn't think about it very hard you might be tempted to use four 10 kΩ 10% resistors in series/parallel configuration to make one 10 kΩ 5% resistor, but that doesn't work. If the values of the original resistors are randomly distributed over their range, then this method makes the resulting value more likely to be near nominal, but the maximum tollerance range is still exactly the same. Think of the limiting case where all resistors are 10% high. The result will also be 10% high regardless of how many you put together and average. Even the average is unlikely to get desirable results. When the circuit is assembled, you are likely to get a bunch of resistors from the same manufacturing batch, probably made immediately after each other. Such a distribution is not likely to be random. However, the point is the worst case error never gets better, which is what matters when designing a circuit.

One thing you can do is deal with the temperature range the resistor experiences. In the extreme case you could uses active heating and/or cooling to keep the resistor at a fixed temperature. That will decrease resistance drift due to temperature, but you still have the issue of the initial value.

There is no free lunch.

So they should be investigated before you improve a tolerance. First factor can be eliminated by selection through measurement of indiviual parts.

Second is an object for several engineering methods: place resistor to a more stable environment, isolate it from mechanical, sonic, thermic, electromagnetic influence and so on. Another way is to use more better material when manufacturing.

Third is the nature of materal, you can replace them, or tune he device after some time passes.

Turns out it is very tricky question and we need to be very cautious with terminology. First of all, lets put the term "tolerance" aside - the use of this term obscures the answers and raises terminology discussions.

Now, the best reference I found on the Web is this - an outstanding article about resistors' values.

In applications which require really precise resistances you will do either of the following:

However, in mass production the above approaches are (usually) too costly and time-consuming. It turns out that you might get to the point where the following decision will be made: we are not investing in ensuring that "worst case" scenario is of sufficient quality, but we do want 90% yield in sufficient quality.

In this case you may use techniques presented in the article I linked above to ensure that "on average" you resistors are closer to their nominal values. Then, of course, you'll have to test your final product and dispose the bad 10% (or, as some manufacturers do, send everything out and hope that some people won't see the difference).

If you're going to build a few very specialized systems - you need to use one of the numbered (1-3) approaches above. If you're in mass production - consider averaging the results.

One shot answer : You can change the TOLERANCE of the resistor since it is the property of the material which is used to make a resistor. So the better option is go for resistor which has better tolerance instead of thinking to improvise the tolerance manually.

If you select a carbon resistor of too low resistance, you can tune it up by cutting it slightly with a file and then seal it with nail polish!

Don't forget that the resistor manufacturer is measuring the part's resistance, and culling out those that are close to the desired value to be labeled and sold as higher-precision parts. So if you're looking for 1k ohm parts, 10%, in a bag of parts, I would be surprised to find many samples in the bag that were well within 5%. Ditto 1% - the manufacturer will just sell them as 1% parts...

You're in luck, there is a method

Let us say you need 10k of resistance. Let us furthermore say you have a limitless supply of 10k resistors - and they're all 10% but you need 5%. 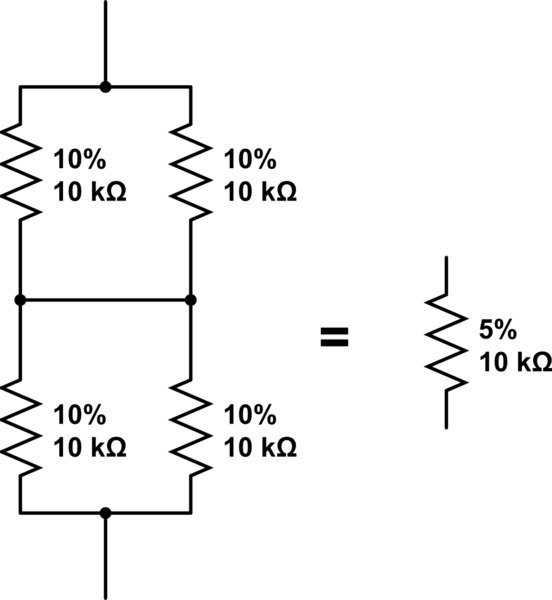 Be advised: The percentage numbers are NOT exact. I could calculate the actual values if I had my notes nearby.

The brief explanation is: The more components you use, the less uncertainty you have because the errors will tend to average out.

NOTE TO PEOPLE TALKING ABOUT WORST-CASE

Point of order to y'all: Worst-case on a 5% is not 5%, 5% is the 3Sigma worst case. The actual worst case is -100%/+(Unknown)%. If your system absolutely cannot have more than 5% variance, a 5% resistor isn't good enough to GUARANTEE that, either. If you call a resistor 5%, what that MEANS is that out of a production line, you have to go past 3 Standard Deviations to go past 5%

36
Are two (or N) resistors in series more precise than one big resistor?
19
Is there a way to average resistors together to get a tighter overall resistance tolerance?
13
Resistors - binning and weird distributions

16
Why are we still using resistors with %5 tolerance while they can even manufacture a 14.318182MHz crystal?
7
Resistor Tolerance - are measured resistor with the same value but different tolerances the same?
2
What is life tolerance of a resistor?
0
When to use pull up/down resistors on IC inputs
0
Estimating gain tolerance
0
What does the tolerance mean for the 0 ohm resistor
1
How to build a digital potentiometer with standard value resitors and MOSFETs?
0
Selecting proper resistance based on tolerance
0
Root Sum Square (RSS) tolerance of parallel resistors