Is there a way to stop servos from "shaking"?

Very simply, I am controlling servos (9g micro servos) based on some data read in from elsewhere. Everything works fine except that the servos will constantly "shake." That is, they vibrate back with very subtle movements (with intermittent movements of 1/2 -> 1cm or so).

I tried correcting this issue in software by doing something like:

Where the do-while is necessary initialize the variables that store the mapped servo value (using the arduino servo library.)

The readChange() function is defined as:

Where xRead is the value that was initialized (the first, mapped servo output.)

This really is not a good approach. It requires that BOTH values must not have changed by a factor of DEG (~10 degrees, or ~0.28V in my case.) If I write the function such that either OR be less than DEG, then what if I was only changing one servo at a time? So there is a delimma.

Is this simply a property of servos (perhaps cheap ones?) or is there a workaround?

It would be much simpler to include a pastie link. Here is the full code.

I have attached two servos together with a laser pointer to allow for two degrees of freedom (X, Y.) There are options, based on the state of several buttons, to control the servos in various ways. The first is "Motion" where I have two photoresistors that, based on the amount of light exposure, affect the position of the servos. I have not yet implemented the code to control the servos by an Xbox controller. The third option is just randomized movement. 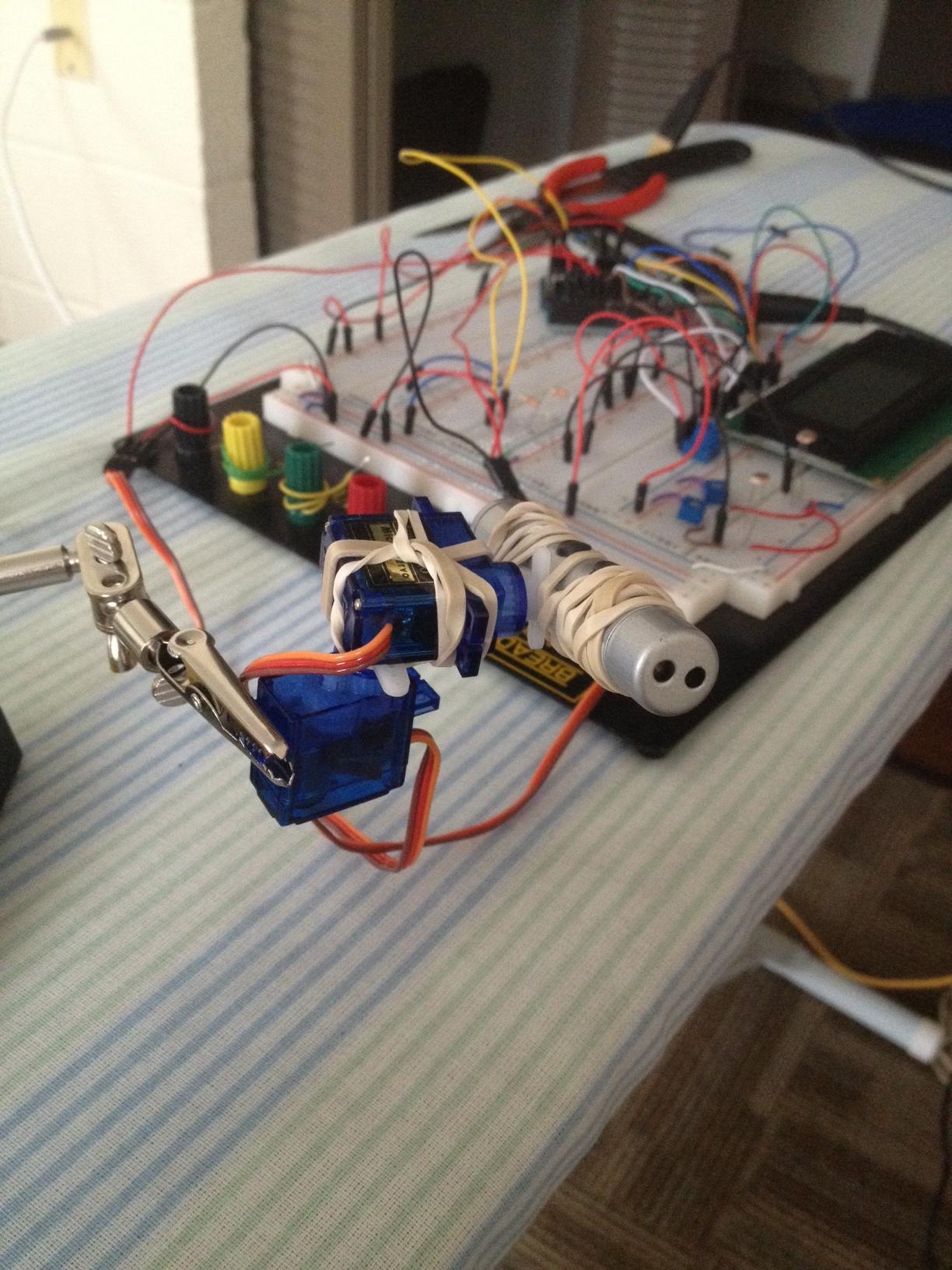 When using the Servo library on an Arduino, a common source of servo buzz is that the interrupt-driven servo routines don't actually give a very stable output pulse. Because the AVR takes interrupts for servicing the millis() clock and other things in the Arduino runtime, the jitter in the Servo library is on the order of several microseconds, which translates to a lot of movement in the servo.

The fix for this is to write your own pulse. Something like this:

This will turn off other interrupts, and generate a much cleaner PWM pulse. However, it will make the "millis() timer miss some clock ticks. (The "micros()" function may be called something else -- I forget exactly what.)

Another cause of buzz in servos is cheap servos with cheap sensors, where the sensors are noisy, or when the exact position requested with the pulse can't actually be encoded by the sensor. The servo will see "move to position 1822" and try to do it, but ends up with the sensor reading 1823. The servo will then say "move back a little bit" and it ends up with the sensor reading 1821. Repeat! The fix for this is to use high-quality servos. Ideally, not hobby servos at all, but real servos with optical or magnetic absolute encoders.

Finally, if the servos don't get enough power, or if you try to drive their power from the 5V rail on the Arduino, this will generate voltage-sag-induced buzz in the servos, as suggested above. You may be able to fix it with large electrolytic capacitors (which are a good idea for general filtering anyway) but you more likely want to make sure your servo power source can actually deliver several amps of current at the servo voltage.

This is called "buzz".

There are a couple of things that will cause it. Instability in the power to the servo is a common cause. R/C servos can draw some BIG spikes when they first put the motor in motion.

Many years ago, I played with a Tower Hobbies Royal Titan Standard servo, controlling it from a 555 and a one-transistor inverter. Dead-simple control circuit. I learned that the servo motor drew 250 mA from the 5V supply while in continuous motion. Buzzing, it easily drew half-amp spikes. (Maybe more: I was just monitoring the current meter on my bench supply, not scoping a current-sensing shunt.)

It took 220 uF directly across my servo to tame it.

Try putting an electrolytic capacitor, at least 100 uF, directly across the power supply to the servo, as electrically close to the servo as you can, and see if that helps.

Based on those experiments, I would never consider using R/C servos for ANYTHING without adding capacitors. That includes radio-controlled models.

This can also be caused by dirt in the servo pot inside the servo. Try the capacitor first.

Is your buzzing/shaking happening only when at or close to the servo's limits (0 degrees or 180 degrees)? If so, there may be a simple fix for you. I have found that cheap servos don't know how to stay at the limits of their movement very well, which can cause the buzzing/shaking you're mentioning. However, if you just limit their range to 10~170 degrees, the issue will be fixed.

If that's not good enough for you, you can follow the more complex fixes mentioned in the other answers, like better power, better servo sensors, etc.

I've fixed my problem by "switching the servo off" after I move it. Example:

PIN is the PWM pin connected to your servo. by switching it to Input mode I was able to shutdown the vibration. This is not optimal solution and I'd suggest trying the other solutions first.

I had the same problem with MG90S servos (jittering), my signal lines are relatively long (60~70cm), placing a 103 (10nF) capacitor over the signal and ground lines fixed the problem for me (I placed the capacitor somewhere in the middle, at the point where the original servo cable connects to my internal cable).

In addition I couldn't use the standard Servo library because the first timer it grabs on the Arduino Mega is Timer-5 and I need that for frequency measurement. As I use only 10 servos I extracted the key code from the Servo library and changed it to using Timer-1 (each timer supports a maximum of 12 servos on the Mega).

The stand-alone code is below for reference, if you want to include it in your own project then you can use the top part only, the lower part is to test the top part (it listens on the serial port, you can give sX and vX commands, where sX selects a servo, s0 would select the first servo, vX sets the servo position in us, so v1500 would set servo0 to the middle position, assuming you gave a s0 command first).

My best option in this case was to attach and detach the Servos in each operation.

PS. this is really no quality at all, just a workaround.

While others have suggested various solutions to this servo buzzing issue, in this thread and other Arduino forums, namely:

In my case, I found that the buzzing stopped when a 9V/2A power supply is plugged into the Arduino board. But the easiest ultimate solution was simply to move the servo slowly:

To me, this looks like errors or mis-tuning of the feedback loop. High-end servo control systems have some knowledge of the motor characteristics (inductance, torque, peak current, pole count), the load (moment of inertia), and instantaneous conditions (position, rpm, back-emf, current). With this information, the motor control program can make predictions about what the servo will do in response to a given input from the controller (i.e. current/voltage input) and on that basis generate the optimum input to achieve the desired output.

As you can imagine, this is somewhat complicated stuff, but an internet search on servo feedback will get you started.

Make sure that the Arduino itself is being powered properly.

I was attaching Arduino Uno to a nearly out of battery laptop via USB cable, resulting in a jittering servo. As soon as I've put the laptop on charge, the servo started working smoothly!

5
Can a motor's movement be improved to any arbitrary resolution?
0
Servo does not rotate to the absolute minimum position
0
TowerPro SG90 servo motor: adding analog feedback
8
Servo responds to servo tester, not to microcontroller. Signals look the same
1
Typically, what is the function between pulse width and angle in a servo motor?
1
20kg digital servo not working, probably because my frequency calculations are very wrong (raspberry pi)
0
Suitable motor for steering wheel angle of the self-driving car?
0
Servo abnormal behavior with continuous cyclic PWM signal