Resistors within a Darlington transistor

I've been considering replacing a 2N3904 and TIP31C with a TIP102 in one of my circuits (PWM LED dimmer), and have noticed in the TIP102 schematic resistors leading from each of the bases to the emitters. My current circuit doesn't have these, and I was wondering what purpose they serve and if my circuit should have them regardless. 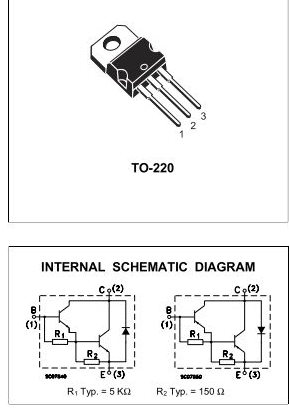 Those resistors are to speed turn-off. The base-emitter junction has some capacitance, which is made apparently larger in an inverting amplifier configuration by the Miller effect. To turn the transistor off, this capacitance must be discharged.

When the base drive is removed, there is no path to discharge this capacitance of the right transistor, because the reversed-biased base-emitter of the left transistor prevents it. These resistors provide a path for this discharge current.

If you are making a discrete Darlington pair, including at least R2 isn't a bad idea. If you don't require switching to be too fast, then you may find the transistor switches off fast enough without it, but I'd include R2 unless I was trying to shave every penny from the cost.

There are no hard and fast rules for calculating what these resistors should be, but the example you provided gives some typical values. If you make them smaller, turn-off will be faster. If you make them too much smaller, all the input current will go through the resistors, leaving none to drive the transistors.

The voltage across R2 is limited to 0.65V by the forward biased base-emitter junction, so current will be:

and you can get some idea (just an idea; for an accurate model I'd simulate or build and measure) of how fast turn-off is affected by calculating the time constant formed by R2 and the right transistor's input capacitance:

The calculations for R1 are largely the same. However, it should be larger, for two reasons. Firstly, the left transistor doesn't need as much help to turn off, because its base capacitance can be discharged by whatever is driving the transistor; there is no diode in the way as with the right transistor.

Secondly, making R1 smaller shunts more current away from the left transistor's base, where it would be multiplied by both transistors. Thus, decreasing R1 decreases gain, because more of the input current is multiplied just by \$\beta\$ instead of \$\beta\cdot\beta\$.

There are various reasons for the resistors. The two already mentioned are to speed turn-off and to guarantee the device stays off when not driven.

Note also that for low output currents, the second transistor could turn on just from the current thru the first resistor. In this case, the B-E voltage and the C-E voltage of the overall device will be lower than for a pure darlington.

There are two purposes to those resistors. As Phil has mentioned, one is to aid in fast shutoff of the transistor.

The other is two ensure the pin state incase the base pin is not being driven. It removes a floating state. Like if a microcontroller pin is in a high-impedence mode.

Which configuration is better for pulling down an NPN transistor's base? has a very long discussion on the use of pull-down resistors on a transistor base.

Not the answer you're looking for? Browse other questions tagged transistors darlington or ask your own question.

35
Which configuration is better for pulling down an NPN transistor's base?
23
Why pull base of BJT switch?
0
Power Amplifier (Darlington) with Power and current limitation

2
Transistor circuit to toggle motor on/off not working (Arduino)
2
PUT Base Resistors Question
4
Does this circuit regulate current?
1
Not sure what two PNPs are doing
0
NPN Transistor circuit not functioning
0
What are the differences between these Darlington-like circuits?
0
Simplest amplifier?
2
Slow build-up and discharge LED effect
3
Current mirror: is there a name for this NPN-PNP pair, and how does it work?