Background: I'm a software engineer with only a little knowledge of circuits--all informal--trying to build an 8-bit sum-carry binary calculator from basic logic gates.

Question: Are there well-known circuits for making a button press (after debouncing) only trigger a signal for exactly one clock cycle while it's being pressed? What are they called so I can learn more about them?

Context: I've got "1", "0", "+", and "clear" buttons on my calculator, but when I press them, I only want the output of this circuit to stay active for a single, but complete, clock cycle (I can't just let it stay high since the clock may oscillate thousands of times while I'm holding the button down, and each tick would be treated as another button press). Basically 1-press = 1 "active" tick. Note that this is after debouncing the button.

So far I've got this circuit, which seems to be working in Logisim:

Treat the switch as already debounced and the LED on the right as "output". Is this the right way to approach this problem? Or am I completely reinventing the wheel? This sounds like a monostable multivibrator problem, but all of the examples that I've seen of those use RC circuits, and send pulses rather than high signals in-time with a clock...

Here is a digital domain solution. There is not a name for a component that fits the function you describe, but you can use a synchronizer together with a finite state machine.

First, your finger is not synchronized to the clock, so the button is assumed to be an asynchronous signal. If the input changes close to the clock it could violate setup or hold time requirements of the DFF0. This can cause the output of DFF0 to be unpredictable (metastable), even a non-logical level. A DFF going metastable is kind of like a coin landing on its side when you flip it. It should be 0 or 1 but actually, in rare cases, it isn't.

The problem is not that the DFF will latch a new value 1 cycle early or late, the problem is that the output may glitch back and forth before stabilizing on a particular value. This could be bad downstream of the design. In this case, our FSM may output a glitch or a pulse that is two clock cycles, for example. The probability that metastability will happen is usually quite low and depends on your DFF, operating clock speed, supply voltage, random noise, and the precise time you push the button.

This problem is called a clock domain crossing (CDC) and requires a synchronization technique. A popular approach is just two DFFs like above. This adds a latency of two clock cycles to the input signal, but this delay is trivial in your application. The synchronizer doesn't eliminate the problem entirely, but makes it an extremely low possibility. Errors due to not addressing a CDC are notoriously difficult to debug. You may pass 1000 tests and fail test 1001. This can lead to painstaking tracing and debugging to try to find the source of the very rare error.

If what you are building has a low tolerance for errors, you should use a synchronizer. You can use the one like above, or use one with three DFFs for even lower probability of failure. Otherwise, if you can tolerate an occasional error, you can get away with just two DFFs and an AND gate for your entire design.

The level of robustness in design should match your application. If you are building a mission critical circuit like a rocket guidance system, you probably should use a 3 DFF synchronizer. If you are building a consumer product with high reliability, go with the 2 DFF synchronizer. If its for a McDonald's happy meal toy, just use a single DFF. A good electrical engineer should be aware of the MTBF requirements for the design, and calculate the probability of failure allowable for the button circuit, the actual failure rate of the synchronizer choices, and choose accordingly.

What you want for your pulse generator is actually a finite state machine. Whether you are a complete beginner or a seasoned pro, starting with a state diagram is always recommended. 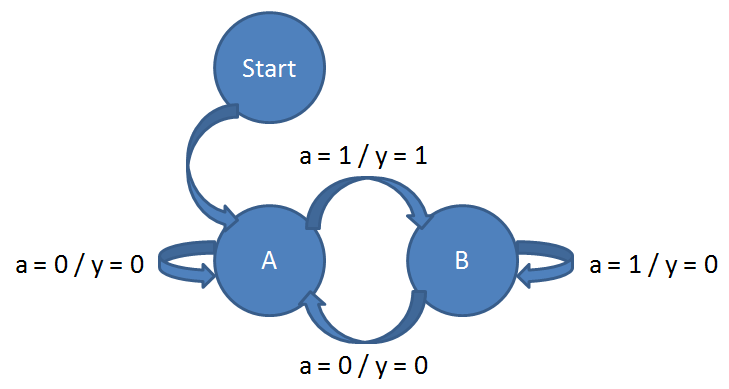 From there you should be able to go from the state diagram to a state table, and then to a FSM circuit. You just need one DFF in your FSM to represent the two states. In the above example, A state and B state represent Q = 1 and Q = 0 respectively, but you can get an equally valid alternative FSM by switching the two states. If it isn't obvious how to get to the FSM circuit, follow some simple FSM tutorials until you get the hang of it.

The output of the FSM above will be \$a[n] \cdot \overline{a[n-1]}\$. This means you only output a 1-cycle pulse when there is a 0-to-1 transition in the input signal.

One final note is that if you can't tolerate errors during start up, you will need to add a reset to your three DFFs. Otherwise, the design above is guaranteed to stabilize to the correct output after three clock cycles after power on.

Not the answer you're looking for? Browse other questions tagged digital-logic interface button or ask your own question.

1
digitalRead sampling rate for Arduino Uno
27
Is it possible to use just a capacitor to debounce a button?
2
Digital Circuit with Toggle Switch using Logisim
2
Can I use a button in place of a clock crystal?
0
Interfacing microcontroller with external circuit - detect LED and simulate and detect button press
0
Lighted button that also lights when another button is pressed
2
Control of transistor as switch at power up and power down
0
Trigger an analog SPDT switch ONLY with a long button press
1
Tact switches only work once