How to properly wind coils for a solenoid?

I need to wind a small electromagnet "solenoid?". About 3cm high and 2~5cm wide running at 5V/0.5A. This magnet will be put into a desk bell so it pulls the clapper down and rings the bell. I have found ready made solenoids that push out but not pull.

So I am attempting to make my own magnet and I have wound several different types of screws, nails and bolts with different types of wire. And now I have noticed a problem with precision :) I can wind a massive coil and it will work but how do I wind a small yet powerful coil?

I can't really find a laymans explanation on what diameter core cable to use and how many windings. In general the more windings the stronger the field which is common across all articles I read.

I found an article where somebody says that the windings should be wound in the same direction (clockwise layer, clockwise layer...etc) to create a truly stronger solenoid but all articles say just wind them back and forth (magnet?)

Can somebody in general suggest what kind of core material and diameter would be the best and if winding the coils in the same direction will actually help. Also is there any difference which way the ends are pointing or do both sides emit the same field?

At the moment I have PCB with 3 1000uf caps in parallel to the coil that is triggered by a transistor. I will be using aTiny that triggers the transistor maybe 0.2seconds and I need a jolt of magnetic power to pull the clapper down and release instantly.

This is a project that somebody got working using USB power and winding his own coil. He uses a darlington transistor? Does that influence the coil somehow? I only have a normal transistor. The gap there has to be about 1.5~2cm so the clapper can smack the bell. I have the same bell. He reckons he used 2m of cable to wind the coil... I used 3.5metres and wound it much much neater than his.. 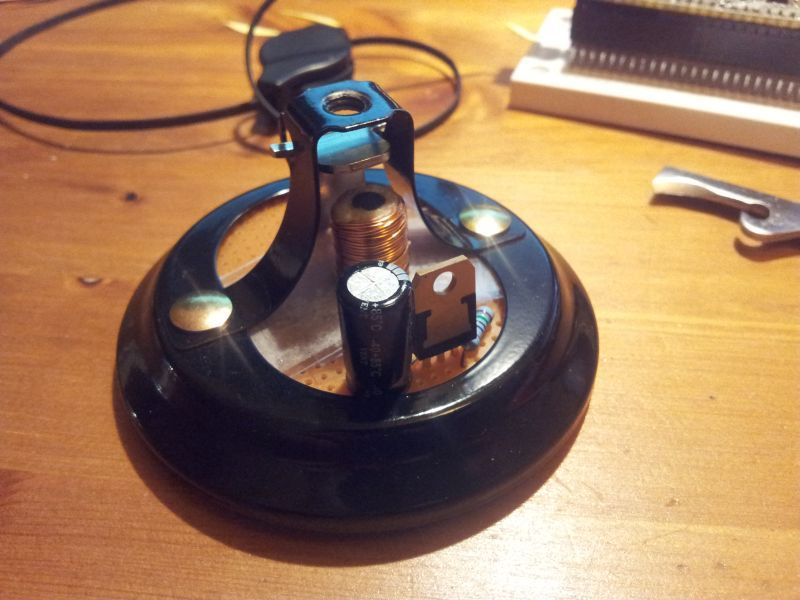 I ended up using a 5v solenoid. Removed 2 capacitors and used the pushing end of the solenoid to kick the clapper out. And DING! It works like a charm. I have no idea how the guy made that electromagnet pull down the clapper?! 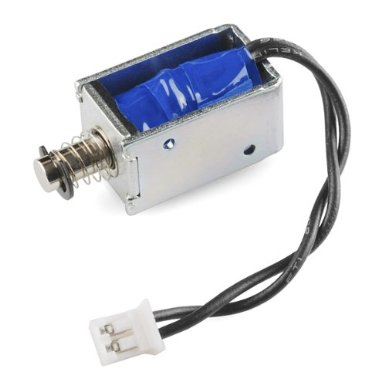 Windings that are side by side that carry current in opposite directions cancel each others magnetic field - you need to wind the electromagnet so that current travels in the same direction in all turns of the coil. There is no sensible argument for doing differently.

These are your only options other than to use superconductors! Fewer turns can be compensated by greater current or reduced solenoid length (stacking turns).

Here's a calculator you can use to estimate field strength and it uses a field value called permeability and this means you can check on various materials and choose one that gives the highest strength BUT for household coil making a piece of iron is fine.

You can also enter the diameter of the coil.

Use a soft iron core rather than "screws, nails and bolts" which are probably steel, the high permeability will help concentrate the magnetic flux from your coil. Best to wind with enamelled wire, this is bare wire painted with an insulating coating.

Plastic coated wire is too thick to make a good electromagnet, all the insulator area is diluting the effect of your coil. Don't use bare wire as the current will flow across the coils (short) rather than around in a spiral. Get the spiral as tightly wound as you can and the entire coil should spiral in the same direction (clockwise).

Your 'aTiny' microprocessor will probably need some help driving a coil. Where do you get '0.5A' from? Look up any of the motor driver circuits online that can sink that load. Capacitors alone will not help. Make sure you have a flyback diode to protect the driver.

Of course all of the turns on the bobbin of an electromagnet are in the same direction.

The "back and forth" refers to the distribution of the windings along the length of the bobbin. A bobbin that takes many turns of wire can be wound very neatly and systematically, or randomly, in terms of the pattern of the distribution of windings.

It doesn't really matter; differences in the winding pattern are in the area of audiophile cork sniffing, with regard to inductors that carry audio. For instance, some electric guitarists look down upon machine-wound pickups, insisting they can hear a different response from hand-wound pickups (hand-wound meaning that a machine is used to spin the bobbin and count the number of turns, but a person feeds the wire by hand, controlling the winding pattern).

In addition to other aforementioned suggestions, to make a Powerful Electromagnet be it Core-less or Cored, you must go the way of Tesla coupled with Capacitor Winding!

By the the way of Tesla I mean, Bifillar or Trifillar, Quadfillar or Hexfillar either in Rolled side by side form or Sperical side-by-side form.

Bifillar winding means using 2 strands of coated copper wire and connecting the ends of one of the two in SERIES not in parallel. So if you use 4 strands you will connect 3 strands in series etc. The Capacitor Winding style implies that you lay you strands side by side as perfect as possible and you separate each layers of winding with a matching insulator like Mylar or Plastic tape or even cloth tape.

Any solenoid or E.Magnet made this way are always Enormously Powerful regardless of there sizes because you have conditioned the Magnet to be able to receive more Power from the Air or Radiant Energy when you switch it on.

Not the answer you're looking for? Browse other questions tagged electromagnetism solenoid coil or ask your own question.

1
Solenoid Fail - No Force
1
Parallel windings on a solenoid coil
0
Calculating Field strength of a air core solenoid
1
how to lower reactance of an electromagnet?
1
Two pin PWM signal to control solenoid/electromagnet
0
How to simulate magnetic field of a toroidal solenoid?
1
Switching transistor for micro solenoid