I'm working on an iPhone accessory that consists of a temperature sensor and LED. I want to power the accessory through the iPhone headphone jack, but I'm concerned that the user can't use headphones while the headphone jack is occupied by the accessory. I am considering Project HiJack to create build this. (http://www.seeedstudio.com/depot/hijack-development-pack-p-865.html)

Does anyone know if it is possible to have headphone jack power an accessory, provide some application data, and be used to reroute the audio data into a second jack built into the accessory as well?

This is from the schematic of the HiJack. The Right Audio Channel is used to harvest a voltage through a transformer, a mosfet bridge and a diode. This is done by:

The HiJack energy harvester can supply 7.4 mW to a load with 47% power conversion efficiency when driven by a 22 kHz tone from the output from a single audio channel on the iPhone 3GS headset port

The left channel is used as data input into the HiJack's microcontroller. 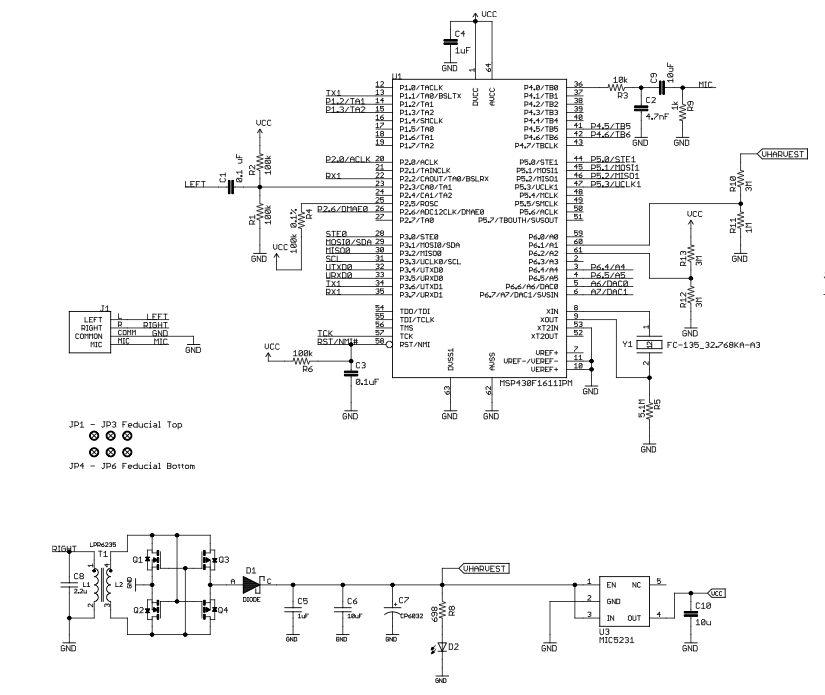 The power harvesting audio (right), data input (left) and data output (mic) is handled by a software library you would include in your custom built ios app (or with hijack's default apps)

Because of this, you cannot use audio and use the hijack at the same time. It's unknown if you can patch through (or in parallel as a 3.5mm splitter would do) without having a negative impact on either the headphones AND/OR the hijack, when either or is being used.

For the most part, someone using a temperature sensor module probably isn't interested at listening to music at the same time.

An idea, requiring much work. Modify the Hijack library to only use the power pin (right channel) and not the data input pin (left channel). Add this to your app, which must include both the sensor code, and a music player code. The music player would only use the left channel. You would tie the lft channel from the iphone out to both the right and left of a second jack. You can still use the mic in to read the sensor. Downside? No data input from the app to the sensor section. 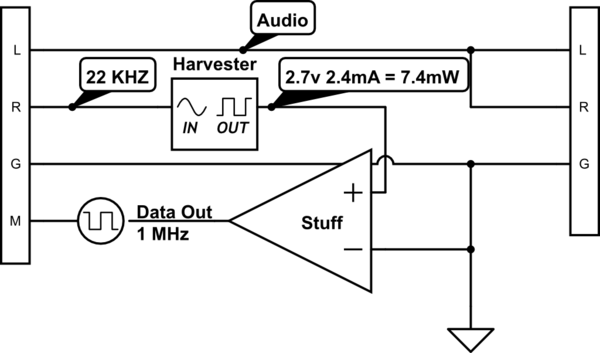 With HiJack, the iPhone communicates with the accessory at 8.82 kbps. I suppose that it would be possible to write your iPhone app in such a way as to multiplex some audio along with your accessory data, then have a Digital-to-Analog converter on your accessory process the audio data and send it to a speaker or a headphone jack, but you won't have enough bandwidth to get a decent sound quality for music.

HiJack is also limited in the amount of power that is provided through the jack (7.4 mW). It would be difficult to power your circuitry and a headphone without external power.

Not the answer you're looking for? Browse other questions tagged audio communication iphone or ask your own question.