Does anyone here know of any cheap-ish handheld meters that are capable of measuring the voltage at specific audio frequencies?

I'm dealing with a few constant frequency signals on the same wire - and would love to be able to tell the voltage at specific frequencies.

The answer below is a great answer - and I guess I should have clarified slightly in asking the original question.

I have thought of using a scopemeter with fft support, but haven't though of using a microcontroller with fft! I'll have to look into that.

I've also looked into using bandpass filters, but the frequencies are so close together that the orders would be crazy high.

There are two non-commercial product options. One is that you go with something like this: 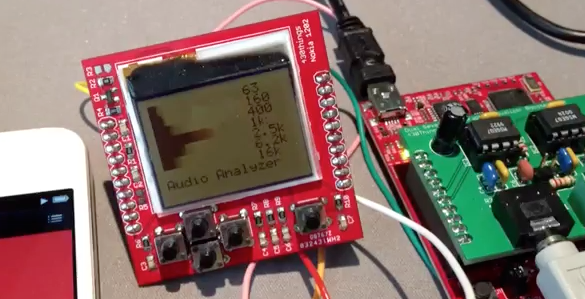 That's a MSP430 Launchpad with a Nokia LCD, but all of the signal processing is done on the MSGEQ7, a graphic equalizer display, commonly referred as a "spectrum analyzer".

There are a bunch of different projects done with it, some have led matrixes, others have leds that vary brightness instead. Arduino too. There is a 5 band version MSGEQ5A (Frequencies between the 7 band version).

Another option is determining the frequencies yourself, through a FFT process using the analog in of any common microcontroller. Especially if is a small, known amount of fixed frequencies. WAY cheaper than any commercial spectrum analyzer, but it does depend on the frequencies themselves. Your microcontroller (and code) needs to be able to sample the signal at atleast twice as fast as the desired frequency (A mcu running at 1mhz will not accurately sample a 1mhz signal, even before you get into code slowing that down)

Edit: You can even go old school discrete analog solution, by using bandpass filters to isolate the frequencies you want to measure, and measuring them individually.

THE FREQEUNCIES ARE 1560 Hz, 1620 Hz, 1680 Hz, 1850 Hz THE DIFFERENEC IS ONLY 60 Hz and will require FFt with bandwidth of 20 hz or so to be able to distinguish these. One method is to multiply the signal with say 1620 hz and average it with a low pass filter . This is the same principle used in lock in amplifiers. You can easily get a tuned amplifier with effective bandwidth of 20 hz, 2 hz or even .2 hz, depending on the time contsnat of the averager used. you might also have to do a quadrature detection in which the 90 deg phase shifted form of the signal is multiplied with 1620 hz that you have generated, with 90 degree phase shift The product has to be averaged and added in quadrature to the in phase product. Quadrature sum of a and b is sqrt (a^2+b^2). the ethod of graphic anaylsers will have too coarse a spread of freqeuncies and you will nopt be able to distingusih presence of 1620 as against presence of 1560 or 1680 hz.

Not the answer you're looking for? Browse other questions tagged audio frequency meter or ask your own question.

1
Frequency of audio signals taken from multimeter
1
Can I use Mic to input Frequency Meter circuit?
1
Sampling frequency from audio jack
3
Design help! -- Play a pure tone into a mic and depending on its frequency a specific LED will light up
0
Bandpass Filter Attenuation?
0
AD9833 Continuous Frequency Change
1
Considering analog meters as displays, which would be more versatile - voltmeters or ammeters?
3
How to find the source of a noise in a particular band