Inductors - what are they used for? [closed]

When are inductors really used? I have read that the elements are typically quite hard to implement into circuits given their physical characteristics. I also read that if inductors are placed in circuits there is a imlpementation method that actually places them flat and coils around itself on a plane, but it's apparently not very common.

I have seen inductors used a little bit in a few wireless applications, but not much else. I know inductors can be used in filters, but so can capacitors which are much more precise and readily available.

In short, what are inductors really used for?

The reason to use an inductor there is that it doesn't "consume" or "waste" the high frequency energy, it just blocks it from passing, so that energy can then pass through the capacitor, to the tweeter, instead.

In general, the behavior of an inductor is the dual to that of a capacitor, so most functions that require one can be implemented by using the other, but in a different arrangement. But that's not always true. For example, if you only want to receive low-frequency energy, you can put in a resistor, followed by a capacitor to ground. The high frequency energy will be "shorted" through the capacitor, and drop most of the voltage across the resistor (which turns the high frequency signal into heat), leaving very little amplitude across the capacitor. That works fine if you only want the information, so it's okay to waste the high frequency energy.. but in the case of speakers, it took a lot of work getting that high energy into the speaker box, so you need a way to filter without losing the energy!

Another common use of inductors is in oscillators.. imagine an inductor and a capacitor connected together at both ends -- there is some frequency at which both resist the exact same amount! That is called the resonant frequency of the combination. It turns out that once you get it started, the capacitor's voltage forces current to flow in the inductor, until the voltage reaches zero -- but now the inductor wants that current to keep flowing, so it does, and ends up charging up the capacitor, but to the opposite voltage it had before. When the current reaches zero, the capacitor starts forcing current again, and it builds up.. but in the opposite direction as before.. and the same thing repeats..

If the inductor and capacitor were perfect, then this would continue forever.. but they both lose a little bit of the energy, turned into heat.. so the voltages and currents are less on each repetition.. all that is needed to make an oscillator, then is a way to replenish the lost energy after each cycle.

The third common use is as an energy storage device, especially in switching power supplies. In that case, a DC power supply's function is to supply continuous current. It also has the function of going between an input voltage source and the output voltage is supplies. So, the fact that it blocks high frequency can be looked as: when the voltage across it is suddenly changed, the current through it does not.. rather, the current only starts becoming different. So, if you very quickly change the voltage to very high, then zero, then very high, then zero, the current will start going up, then start going down, but as long as you only leave either of the two voltages for a very short time, the current won't change much at all, in either direction. If you leave it high the same period as you leave it low, then the current will average out and stay steady. If that current matches the current being taken out of the power-supply, then the output voltage of the supply will stay constant. Now, imagine leaving the high voltage on a little longer than ground -- the current will increase slowly, over the course of many repetitions.. and vice versa. If the load keeps taking the same current, then the output voltage of the supply will slowly rise, as the extra current charges the capacitor between the output and ground. That is how a switching supply uses an inductor to change large input voltage into a smaller output voltage. There is a circuit that detects the output voltage, and compares against the desired voltage, and adjusts how much time the inductor is given the high input voltage versus ground, in order to change how much excess current there is to charge the capacitor on the output (see circuits posted with other answers).

Those are the only three common uses.. but some exotic circuits use the transfer function of an inductor in odd ways (for example, in older radar as part of a "steering" circuit to block out-going energy from blowing out the sensitive receiver). See also "gyrator", which can make a capacitor look to the circuit like an inductor (and vice versa)!

Energy stored in a capacitor comes out again in the opposite direction from which it went in.

Energy stored in an inductor comes out in the same direction as it went in.

This lets you build resonant LC circuits where enegy circulates between a capacitor an inductor at a particular frequency: this is the traditional basis of a radio reciever circuit.

LC filters can lose less energy from the signal they pass than RC filters.

You can also build near-lossless power voltage conversion "boost" and "buck" converters by sending pulses of current into an inductor, effectively filtering it into a particular target DC value.

And lets also consider those devices which use an inductor (a coil of wire) to function. I'm certain you must have seen these things before. 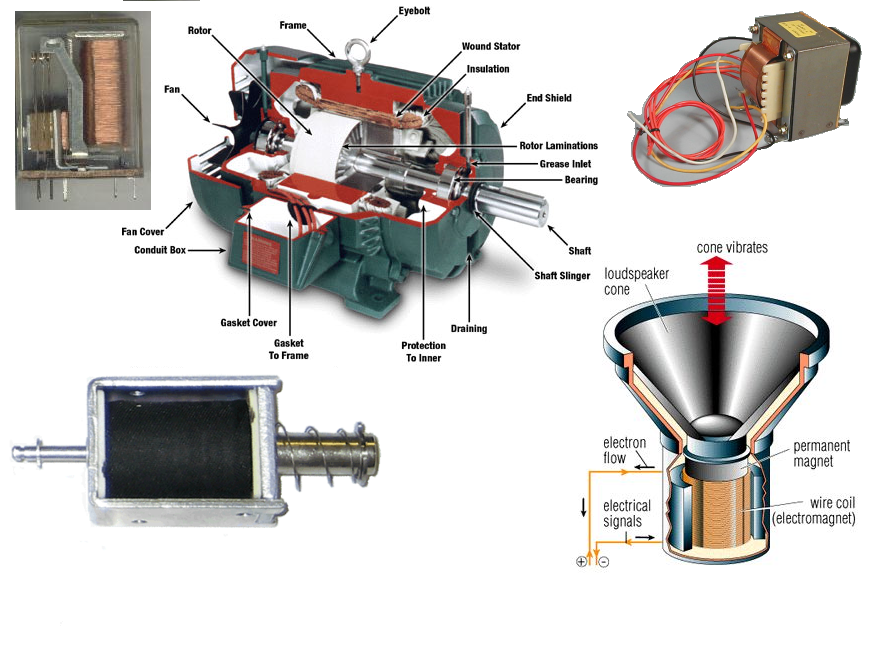 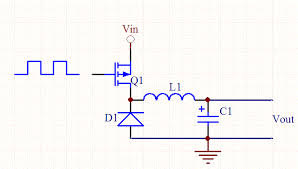 The square wave applied to MOSFET Q1 chops Vin into a square wave and applies it to the L1-C1 filter. (D1 clamps the inductor voltage during the off-time of Q1 , preventing the switching node from going excessively negative with respect to the output.) The average of this square wave will be the energy provided to the load, but most loads don't like pulsating DC with sharp edges. The inductor slows the rate of rise of current to a much lower value, and stores energy so that when the switch is off, it sources energy to the capacitor and load. The capacitor sees a controlled charging current at all times regardless of the state of Q1, making the output a close approximation to DC (a very small triangular AC signal riding on a DC signal).

It's this combination of current filtering (provided by the inductor) plus voltage filtering (provided by the capacitor) that turns the square wave into a reasonable DC output. Without the inductor controlling the rate of charge and discharge of C1, the output would be not dissimilar to the square wave input of the regulator, with heavy current being drawn as the capacitor abruptly charges to Vin when Q1 is on, and fast discharge when Q1 is off since there's no current source helping maintain the voltage across C1.

Any time you want to connect two nodes of differing voltages, you'll need to limit the current somehow, otherwise you get huge spikes. Inductors limit the current flow without burning (most of) it off as heat, like a resistor would. Essentially, instead of getting a brief huge pulse of current, you get the same average current spread out over a longer time. This lowers the RMS of the entire power transfer, reducing the heat losses and EMI/RFI noise.

Chokes are also useful for filters on unpredictable signals, to prevent unanticipated current spikes from affecting equipment. This kind of inductor is readily available as well in many sizes, depending on your needs.

The whole purpose is inductance i.e. magnetism and therefore the core varies. You have to look at this from a physics perspectives, answer stares right at you. Electronics is merely the application side of it.

Not the answer you're looking for? Browse other questions tagged design inductor or ask your own question.

4
What would be a good use for a memristor?

10
What are FIT's and how they used in reliability calculations?
5
How are air-core inductors typically constructed?
1
Magnetic coupling of inductive loads
4
Placement of filter components to reduce EMI
0
Narrow bandpass filter using maximally flat LPF prototype design
4
Inductor in-rush current
0
single layer coil inductive coupling
0
Why Ferrites are used as a cores for inductors
0
How often are inductors used in electronics