Why does CircuitLab have the MOSFET symbols it has?

CircuitLab has [used to have -- they have changed their symbols since this question was asked] these goofy things:

My eyes are much more accustomed to these: 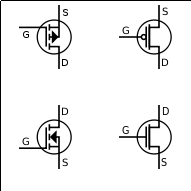 ...with the simpler versions on the right used really only in the context of CMOS ICs.

Am I totally off my rocker here? Are these symbols some crazy European convention I know about or did CircuitLab select them just to annoy me?

The image notes on Wikipedia suggest these symbols come from Sedra and Smith, "Microelectronic Circuits", but not having that book, I don't know what justification it gives, if any, for new symbols. Can anyone shed some light?

I don't know exactly what CircuitLab's designers were thinking, but Sedra and Smith have a three-part figure (number 5.11 in the 6th edition of the textbook) introducing/showing their MOSFET notation, followed by an explanation that I'll quote entirely (for a reason that will become apparent in the end):

Figure 5.11(a) shows the circuit symbol for the n-channel enhancement-type MOSFET. Observe that the spacing between the two vertical lines that represent the gate and the channel indicates the fact that the gate electrode is insulated from the body of the device. The polarity of the p-type substrate (body) and the n channel is indicated by the arrowhead on the line representing the body (B). This arrowhead also indicates the polarity of the transistor, namely, that it is an n-channel device. Although the MOSFET is a symmetrical device, it is often useful in circuit design to designate one terminal as the source and the other as the drain (without having to write S and D beside the terminals). This objective is achieved in the modified circuit symbol shown in Fig. 5.11(b). Here an arrowhead is placed on the source terminal, thus distinguishing it from the drain terminal. The arrowhead points in the normal direction of current flow and thus indicates the polarity of the device (i.e., n channel). Observe that in the modified symbol, there is no need to show the arrowhead on the body line. Although the circuit symbol of Fig. 5.11(b) clearly distinguishes the source from the drain, in practice it is the polarity of the voltage impressed across the device that determines source and drain; the drain is always positive relative to the source in an n-channel FET. In applications where the source is connected to the body of the device, a further simplification of the circuit symbol is possible, as indicated in Fig. 5.11(c). This symbol is also used in applications when the effect of the body on circuit operation is not important, as will be seen later.

So they basically wanted to use an arrow for the current flow instead of writing "S" and "D"; and this applies to both their 4-pin and 3-pin representations of MOSTFETs. Although the diagram in question (perhaps amusingly although I suspect it is done for reasons of absolute clarity) still shows the D and S labels [for parts (b) and (c)], in subsequent diagrams of the book using simplified symbol (c), those S & D labels are actually dropped. It appears that CircuitLab might have adopted these symbols for the same reason, since they don't show any letters alongside them.

Addendum: when I click on "simulate this circuit" under the first figure in the OP, it actually takes me to a page with following symbols:

So it appears that CircuitLab changed their mind about their (default) MOSFET symbols in the meantime! (The new ones turn out to be the IEC 60617 symbols.) Nevertheless, I suspect Sedra and Smith will press on with their notation despite this adoption setback...

EDIT: Per request below, there is indeed a later figure in Sedra & Smith (number 5.19 in the 6th ed.) introducing the p-channel MOSFET symbols:

The explanation for these is much shorter (as you'd expect for an analogous figure):

The circuit symbol for the p-channel enhancement-type MOSFET is shown in Fig. 5.19(a). Figure 5.19(b) shows a modified circuit symbol in which an arrowhead pointing in the normal direction of current flow is included on the source terminal. For the case where the source is connected to the substrate, the simplified symbol of Fig. 5.19(c) is usually used.

They just reverse all the arrows relative to the n-channel case. No circles are added or anything else.

I understand your confusion, but my point of view is the opposite - why to use these complicated symbols:

What do arrows on these symbols mean? Why the hell the gate is drawn in a punctured line? What function does this annoying circle serve? Why the Source and the Bulk are shorted on the symbol???

I'm much more confident with these guys:

Sometimes the "arrow notation" is combined with the "circle notation":

In is very convenient to use these symbols because the arrow indicates:

The only downside of using the most simplified symbol (without "circle notation") is that you need to remember which direction the arrow points in NMOS and PMOS - outwards and inwards respectively. However, if you remember that the current is conducted by electrons in NMOS and by holes in PMOS, you don't need to memorize such a useless information as arrows directions - it takes exactly 20 seconds to understand which device you're looking at based on direction of the flow relative to Source.

Not the answer you're looking for? Browse other questions tagged mosfet schematics symbol or ask your own question.

61
MOSFET: Why the drain and source are different?
26
MOSFET symbol - what is the correct symbol
3
Kill off voltage below a certain level

2
What does the series of circles in a schematic mean?
2
Why do these triangle symbols mean?
2
Can I have two (or more) different symbols for the same LTspice schematic? How?
0
What does a P-Channel MOSFET symbol with body connected to source mean?
1
What does this “Not Installed” symbol mean on the data sheet?
0
What's the difference between these diode symbols?
0
What does the X symbol mean at wire junctions?
0
What are the 3 box-symbols on the teensy2.0++ schematic?
3
Why does a MOSFET have 2 semiconductor leads?