I saw this video on Vimeo http://vimeo.com/23507315 and am amazed. Does anyone know how this works? Dies it send a pulse or switch ground? What is the wheel he is turning? What is that big gray thing at the top of the screen? Why dies he seem to have to hold the wire at the bottom of the screen?

Its actually a rather simple circuit, there are 4 things going on at once.

There is a pc speaker (silver blob) connected to an arduino out pin and ground, probably driven PWM from the arduino

There is a potentiometer, connected across the 5v and Ground, with the center tap going to an analog in pin used as a simple voltage divider, he is probably using the value of the analog in to drive the pulse frequency. The "wheel" is just a weird looking knob on what is otherwise bog-standard potentiometer

The next part is just my guess, but I think its right.

The part that is hanging (little black square) is probably an optocoupler, the two pins on the left are just connected to an arduino output pin and ground, with a resistor for current limiting for the internal LED's

The optocoupler is basically a switch, that is (most likely) controlled by the same pulsing code as the speaker and the LED.

Here is my (quick and dirty) markup of the video 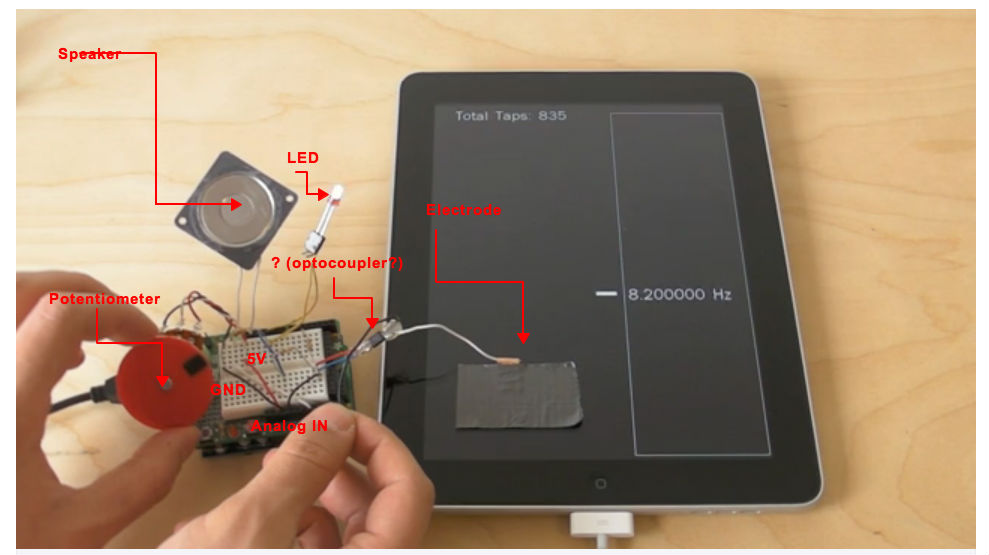 Not the answer you're looking for? Browse other questions tagged arduino touchscreen capsense or ask your own question.