Can a fuse be placed after a load?

Considering that the regular treatment of a fuse is to place it on the positive side, "before" a load, is this just common practice, or is it backed by an actual reason?

Can a fuse be placed on the negative side, "after" a load? Considering that 1, there is a school of thought that current flows from the negative side to the positive side, and 2, current should be equal at all points in a series circuit (which is why a resistor can go on either side of an led and still regulate the current). Is there any specific reason that the fuse is placed on the positive side aside from just convention?

And for that matter, can a fuse be placed in the middle of a circuit?

Depending on what the fuse is designed to protect, and what behavior is desired when the fuse blows, it could potentially be placed anywhere in series in the circuit that must be interrupted on fault conditions.

For a simple circuit like this, all 3 fuse locations shown are valid and will protect the LED, the CL25 driver and the battery in case something goes awry: 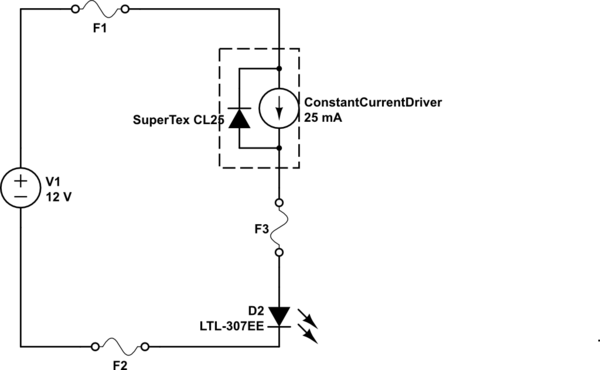 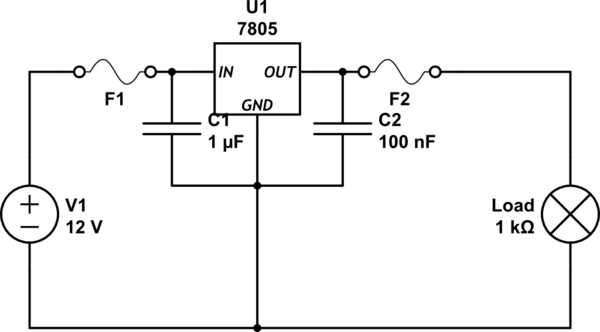 In such situations, using multiple fuses for protecting individual sub-circuits is common.

Also note that as the circuit grows more complex, having a fuse on the ground return path becomes increasingly undesirable: A "typical" fuse necessarily introduces some resistance into the path, by the very fact that heating of this resistance due to current through it causes the fuse to blow. A changing current through the ground return therefore ensures a changing voltage across the fuse, and hence a varying ground voltage as seen by the following parts of the circuit.

This may be immaterial in low current designs, where the voltage generated across the fuse even at maximum within-spec load is insignificant compared to the circuit voltages. Thus, you will see a return path fuse on some automotive circuits.

In all other cases, this variable ground voltage behavior is undesirable, hence fuses on ground return would be avoided.

As suggested by rawbrawb, a footnote on why low-side fusing is avoided in higher voltage designs, i.e. where the supply voltage is either DC, or AC at mains voltage or sufficiently high voltage such as to be harmful or painful to accidental touch:

The ground return is also the "no voltage" or safety return path for a circuit, essentially zero Volts, safe to touch, and in circuits with a non-isolated power supply, often connected to the device chassis and eventually to building earth.

Until humans get bioenhancements which incorporate internal fuses, this exposes users to potential risk of electrocution or injury during device diagnosis, from what should have been a "dead" circuit. Hence, in high voltage devices, having the fuse on the high side is pretty much mandatory. Yes, additional fuses for individual sub-circuits might be used as well, for the low voltage sections for instance.

A fuse "after" the load would change your ground reference, making it more difficult to make accurate measurements on the load. Most of the time the ground reference of a meter is simply clipped to the chassis. And although there will be a voltage on the load's high terminal, no current will flow.

Also you'll have a fairly high chance that the fuse is shorted by the chassis housing, be it aware or accidentally, as nobody expects a fuse in that position. When measuring resistance while the circuit is powered off, the fuse looks like a short and the load appears as if directly connected while it isn't.

And notice that when the fuse blows, the load will still be connected to live power supply which is an unsafe situation.

Placing the fuse before the load (in your language by 'before' you mean the highest potential) is purely a safety convention. In the event of a fault it isolates the load from the voltage source. The reason for the fuse to blow is always because of a fault, that fault may have safety implications, this way at least the system becomes fail safe.

If the fuse were placed 'after' the load (by after in your language this means towards the lowest potential), the source potential could still be present and dangerous at the load even though the device is not operating and may even have a critical fault.

Really you should say 'placed towards the largest potential' (which may be negative). As any circuit is a loop, there is no before or after.

The point of a fuse is to disconnect overcurrents. To decide where to put fuses you need to think about where overcurrents can potentially flow under fault conditions, where best to disconnect them and what impact the opening of fuses will have on the voltages in your system.

If your circuit is as simple as a floating source driving a floating load it really doesn't matter which side you put it in or even if you put it in the middle between a pair of loads connected in series. It will disconnect the overcurrent either way.

In more complex circuits it's normal practice to designate one node in the circuit as "circuit ground" or "0V". Depending on the application this node may or may not be connected to "mains earth" and/or the general mass of the earth. Most loads in your circuit will have one end connected to "circuit ground".

Power rails may be positive, negative or even AC relative to circuit ground.

Fusing the ground referenced end of a device can mean that if/when the fuse blows a connection that was normally at (approximately) ground potential rises to a hazardous voltage. Some electrical standards forbid fuses in neutral conductors for this reason. Even in a system that doesn't involve dangerous voltages such a rise in voltage may cause damage.

In a split rail DC system or a multi-phase AC system fusing the neutral conductor can lead to overvoltages as loads on different poles/phases end up in series.

Not all circuits fit that model though and in such cases you have to think about where overcurrents can flow and how to protect against them. In some cases it may be deemed nessacery to include more than one fuse (or better still a multi-pole common trip circuit breaker) to provide adequate protection. This is especially true when you start dealing with "open collector" style outputs that switch the "ground" end of the device.

1
Automotive power supply - considerations for selecting fuse
1
Is there a standard stating how fast a fast fuse is, how slow a slow fuse is?
6
Small step down transformer fuse, primary or secondary?
0
Remotely monitor condition of fuse
1
Is a fuse necessary after a power supply?
1
Do I need to fuse batteries in parallel?
1
E-fuse using Mosfet
1
Why should a fuse be installed in live instead of neutral?
10
Placement of fuse on neutral wire. Why?
0
Blade Fuse Properties?