Why can't two series-connected diodes act as a BJT?

Another form of the question is: will joining two diodes with wires (pn-np) make a transistor-equivalent?

I read that they are not equivalent, but why?

Many people think that the answer to this question is related to the width of Base region in BJT transistors - it is incorrect. The answer got quite long. You can read starting from "Tricky Question" section if you want the bottom line.

I believe that you were led to ask this question due to something like this picture:

This is a standard practice of teaching the basics of BJT, but it can confuse someone not familiar with semiconductors theory in details.

In order to answer your question at an acceptable level, I need to assume that you're familiar with the principles of operation of PN diode. This reference contains a detailed discussion of PN junctions.

The answer concerns NPN transistor, but it also applies to PNP transistors after appropriate change of polarities.

NPN in forward-active mode of operation:

The most "useful" mode of operation of BJT transistor is called "forward-active":

NPN is in forward-active mode when:

Due to Base-Emitter junction being forward biased, there is an injection of electrons from the Emitter to the Base (\$I_{E_n}\$ in the image above), and the simultaneous injection of holes from the Base to the Emitter(\$I_{B1}=I_{E_p}\$ in the image above). Emitter region (\$n^{++}\$) is much more heavily doped than the Base region (\$p\$), therefore the current due to electrons injected into Base is much higher than the current due to holes injected into Emitter.

Due to injection of huge amount of electrons from Emitter, electrons tend to diffuse through Base to Base-Collector reverse biased junction. Once an electron reaches there, it is swept across the Collector-Base depletion region and is injected into Collector thus contributing to Collector's current (\$I_C\$ in the image above).

Now, if all these electrons injected from Emitter could diffuse to the reverse biased Base-Collector junction without being subject to other effects - there were no importance at all to the width of the Base region. However, there is recombination going on in the Base.

In recombination process the injected electrons meet holes and "neutralize" each other. The injected electron is "lost" in this process and will not contribute to the current at Collector terminal. But wait, charge conservation requires that the hole which recombined with the injected electron will be supplied from somewhere, right? It turns out that the recombining holes are also supplied from the Base terminal (\$I_{B2}\$ in the image above) thus increasing Base's current and decreasing the Emitter-to-Base currents ratio (which represents transistor's current gain, remember?).

The above means that the more electrons recombine during diffusion through Base region, the lower the current gain of the transistor. It is up to manufacturer to minimize the recombination in order to provide a functional transistor.

There are many factors that affect recombination rates, but one of the most important ones is Base's width. It is evident that the wider the Base, the more time it will take to injected electron to diffuse through the Base, the higher the chance that it will meet a hole and recombine. Manufacturers tend to make BJTs with very short Base's.

So, why can't two PN diodes back to back function as a single NPN: 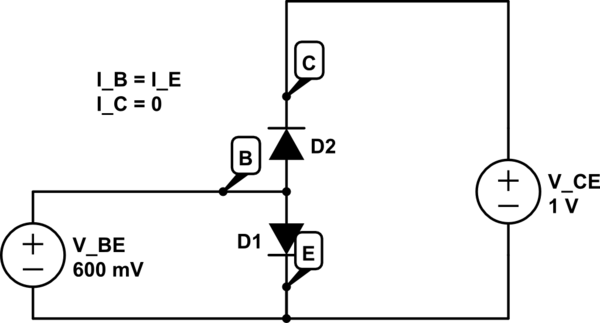 The diodes are functioning as standalone devices, not a single BJT!

To various degrees of accuracy, many people can answer your initial question as I did. However, the more interesting question is this: if we make \$p\$ sides of both diodes very short, such that the sum of their widths will be no wider than Base region of NPN transistor, will the diodes function as a transistor?

This question is more difficult to answer because the straightforward answer of "no, the Base of BJT is very short" is not applicable anymore.

It turns out that this approach will not make two diodes similar in behavior to a single NPN transistor. The reason is that at metal contact of the diode, where metal and semiconductor are in touch, all the excessive electrons "recombine" with the "holes" supplied by the contact. It is not the usual recombination as metals don't have holes, but the fine distinction is not that important - once the electrons enter metal, no transistor functionality can be achieved.

The alternative way of comprehending the above point is to realize that Collector-Base diode is reverse biased, but still conducting high current. This mode of operation can not be achieved with standalone PN diodes which conduct a negligible currents under reverse bias. The reason for this restriction is the same - excess electrons from the P side of the forward biased diode can not be swept to the P side of the reverse biased diode through the metal wire in "BJT like diode configuration". Instead, they are swept to the power supply providing a voltage bias to the common terminal of the diodes.

There was a follow-up question which asked to provide a more rigorous reasoning for the above two paragraphs. The answer concerns metal-semiconductor interfaces and can be found here.

Basically, the semiconductor needs to be connected directly.

It may be worth thinking about the equivalent question for vacuum tubes. Why can't two back-to-back diode tubes function as a triode? The answer is that for a triode to function properly, most of the electrons emitted by the cathode have to pass through the mesh of the grid in order to reach the anode. If you connected two diode tubes together and called the link between them a grid, or if you made the grid of a triode into a solid chunk of foil instead of a grid, then all the electrons would make it as far as the grid and stop there, draining out into the grid supply instead of being re-emitted to get to the anode. For correct operation of a triode there has to be an opportunity for the electrons' momentum to carry them right through the grid, driven by more than just the potential between the grid and anode.

The physical effects in play in a semiconductor transistor are different, but the fundamental idea that current must be able to bypass the wire that would otherwise suck it out in the middle remains the same.

This is a very reduced version of the already accepted answer.

Metal has different properties than the semiconductor, so it will not unify the two N's into a single N. The Two diodes will be a P-N-metal-N-P component which is not an N-P-N component. (Vice versa for PNP.)

(If you slice the base of a transistor with a thin sheet of metal, it will stop working.)

The explanation of the transistor's work by analogy with the hydraulic system appeals to me more. Everyone knows the situation where you first need to suck the water in the hose. And when the water passes through the highest point it starts to flow by itself. In a transistor, analogously, just overcome the resistance of the n-p connection so that the current can flow.

A BJT relies on the principle of diffusion (of minority charge carriers).

It works only if the thickness of the base is in the order of the diffusion length.

This can not be accomplished by connecting two discrete diodes.

No, because to make a transistor needs only a thin layer between emitter and collector but if you connect 2 back to back diodes will provide a thick layer which will be difficult for electrons to penetrate

Basically, one of the diodes will shut down due to the voltage difference in either base-emitter or collector (0.7 in any configuration). A closer approach will be a zener and two diodes but still won't function as a transistor nor anything useful. I'm terrible to explain, but the answer can be found in understanding how to eliminate voltage drop across a diode, something rarely found in books but extremely important. Now try to imagine a 0.7V battery in parallel with a diode connected to a signal then it will conduct starting from 0 and will collapse at 0 (not the typical -0.7). Well, there is more than that but I'm only trying to point you somewhere.

2
Can I build a transistor through two diodes?
1
Does back to back connection of PN diode works exactly as transistor?
0
Why can't a combination of two diodes connected back to back act like transistor?
0
Basic operation of BJT (Bipolar Junction Transistor)
-3
NPN Transistors
9
Transistor(BJT) as Two Diodes
1
Emittors and Collectors in a transistor, what exactly makes them different?
0
In an NPN transistor, why doesn't current flow without applying a base voltage?
0
Why Collector-to-Base currents ratio in a BJT transistor always greater than 1?

1
Why can't we use diodes in place of batteries?
0
Why are two diodes used here?
2
Why do Schottky diodes have two anodes?
2
Does connecting between two series diodes suppress noise?
2
Why are there two diodes in series in this test circuit?
0
Power handling for series connected diodes
7
Adding Diodes to Transistor Astable Multivibrator; 1N5818 Schottky diodes work but 1N4148 diodes don't; can't figure out why
5
Voltage drop across opposite diodes in series
2
Why isn't the NPN diode model two diodes connected in series?