What is the function of the bulb in a Wien bridge oscillator?

In this answer it is said that the bulb in a Wien bridge oscillator is for temperature compensation. 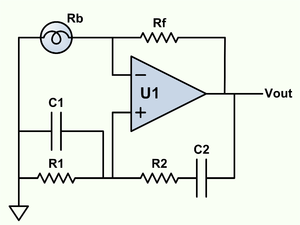 Is that true? (I thought it is a kind of AGC to stabilize the output level.)

The lamp posseses a fair degree of thermal lag and for most frequencies above low audio it's resistance doesn't change much over a cycle of the oscillator waveform and hence the signal isn't distorted much.

Modern Wien oscillators use a JFET for amplitude control by converting the peak amplitude of the output to a DC level (rectification and smoothing) but they still suffer from low frequency distortion because at low frequencies there will be a pronounced ripple on the DC level controlling the amplitude via the JFET.

One approach to designing an oscillator is to make it produce slightly lower gain at higher amplitudes. If one has an oscillator circuit with a gain of 1.001 at voltages within the range -0.9 to +0.9, and 0.999 at values outside the range -1.1 to +1.1, then it will oscillate with an amplitude somewhere around a volt. Unfortunately, the variation in gain throughout each cycle will cause some distortion. One could reduce the distortion by reducing the variation in gain, but the circuit would become very "touchy"; even with the values given, something which reduces the gain of the circuit by 0.1% could cause it to stop oscillating altogether.

The bulb is a cheapass/very old fashioned PTC of sorts. I don't think this is ever used anymore to be honest. Googling around I see a couple of people using it for novelty projects, but if you are really interested in building such an oscillator (which is still fundamentally unstable in some modes) you'd just use an actual PTC nowadays.

Not the answer you're looking for? Browse other questions tagged oscillator wien-bridge or ask your own question.

5
Wien bridge oscillator - what is a suitable replacement for the "bulb" typically denoted?
6
How to generate 30Hz sine wave?
0
Wien Bridge Oscillator with LM358