For a traditional boost switcher, there is a MOSFET that grounds the inductor (this of course is synchronous by design) and there is a diode that "catches" the back emf from the inductor and charges a capacitor. The diode isn't synchronous but for many applications the forward volt-drop (hence power loss) of the diode is less of a problem compared to a buck (step-down) regulator.

This is simply because, for a boost circuit, the load current is significantly smaller (for the same load power) than the load current in a buck circuit. Also, the forward diode volt-drop, as a proportion of the output voltage, is usually very much smaller in boost converters.

BUT, there are synchronous controller devices for flyback applications? Answer - there always will be because the rectifier MOSFETs aren't part of the primary circuit - they are on the secondary circuit and need a chip that controls them. For a regular boost converter, it's so simple to incorporate that one extra pin for driving the gate of the MOSFET that replaces the diode. OK you probably need an extra pin to create a boost voltage level but a lot of step-down buck regulators have those anyway.

If you do a few patent searches, there are novel ideas that are more along the lines of retrofitting a FET across the boost diode and some of these use a coupled winding to the main inductor to catch the initial back-emf when the regular grounding FET goes open circuit.

The best way is having the boost converter chip have the extra pin for driving the top MOSFET's gate just like as seen in one of the other answers that shows the LTC3786. 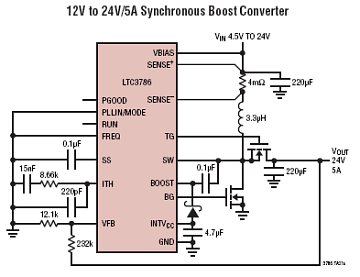 Of course, a lot depends on your input voltage, output voltage and current. (?)

P.S. The diagrams in fig.3 and fig.8 of the TEA1795T datasheet (which was mentioned in the O.P.) show power converters with LLC half-bridge topology. These types of converters usually have with output power 200W to 500W (or even up to 1kW).

Not the answer you're looking for? Browse other questions tagged rectifier boost or ask your own question.