What is the meaning of "half bit" in this context?

Also some ADC math uses 0.5bit precision in the IC specifications/datasheet. Can someone elaborate in this subject?

I wonder how it's possible to have half a bit?

In UART based asynchronous serial communications (of which RS232 is an example), a serial byte of data is "enclosed" within a start bit and a stop bit(s). Following the stop bit there is a gap before the next data byte and this gap can be regarded as extending the stop bit(s): -

A lot of serial data transmission uses one stop bit because the receiver is able to process the bytes in the time but sometimes extending the gap between data bytes by increasing the number of stop bits is useful. As both sending and receiving UARTs have a much higher internal clock rate, manufacturing a fractional bit length is easy.

For an ADC, I've attached a drawing: - 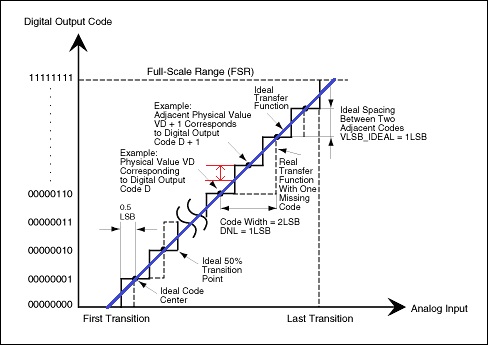 The blue line represents a linearly rising analogue input voltage and the staircase is the digital number from the ADC trying to represent that analogue voltage. In the middle I've shown in red what the theoretical maximum error will be - no surprise it being equivalent to 0.5bits.

In both of the cases you mention, an analog quantity is involved somewhere.

In the RS-232 case, the number of “stop bits” refers to a duration, so 1.5 stop bits simply means 1.5 times the duration of a bit at the given rate.

Not the answer you're looking for? Browse other questions tagged adc rs232 or ask your own question.

2
How can I troubleshoot stuck/flipped bits in a serial connection?

17
Mixed signal PCB layout for PSoC
4
How can I get a linear relationship between a voltage divider and an ADC?
0
ADC forwarding directly to UART
2
About ADC's 'No missing code'
2
Is there a standard describing the UART data frame protocol?
0
What parameter of this sensor necessary to decide about the required ADC resolution?
0
How to use this 12-bit ADC chip