I have 2 sections in my PCB.

In one section I would like to put 4 of each color. In the other section put 20 of each of these.

These LEDs could be considered to be on all of the time after power up.

I am trying to figure out what would be the most efficient use of power and determine the series parallel configuration. PWM is a possibility if needed.

The large swing in the input voltage is why I am asking this question. If it were only 12v or 24v then the answer would be straight forward. Also if I was not concerned about efficiency / power distribution it would easy as well.

Also I am trying to stay away from the use of LED drivers vs PWM because of the code rewrite involved.

LEDs are current driven devices, not voltage driven. Hence, as long as the drive current requirements are met, the voltage involved is merely a dependent variable, so to speak.

For both types of LEDs mentioned, a constant current buck LED driver would probably provide the lowest cost Bill of Materials for a very high efficiency design.

For instance, the Texas Instruments LM3407 constant current, floating buck converter will allow a supply of 4.5 to 30 Volts, and a LED string forward voltage of anywhere between 10% and 90% of the supply. Taking the voltage numbers provided in the question:

So, as long as each string is between 2.8 and 10.62 Volts Vf, this regulator can support the application. Typical implementation, taken from the datasheet: 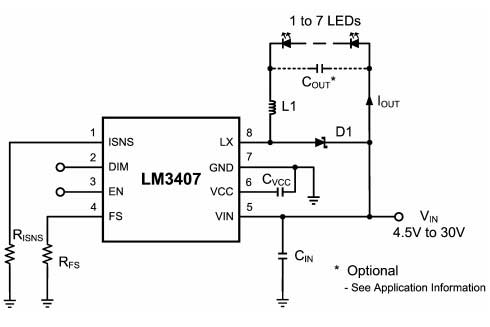 By using switching current regulators, the issue of getting rid of surplus voltage as heat is pretty much eliminated. As can be seen from the example of the LM3407 above, switching regulators aren't too fussed even if 90% of the supply voltage needs to be dropped within the regulator: The device does cycle-by-cycle current regulation of the load (the LEDs), and simply switches off the rest of the time, hence not needing to dissipate the excess voltage as heat.

This simplifies the series / parallel LED decision significantly: Simply put as many LEDs in series as you like, up to the maximum determined by the supply voltage lower limit (10.62 Volts as calculated above).

Not the answer you're looking for? Browse other questions tagged led pcb-design series or ask your own question.