How to dimension the capacitor for the voltage-divider of a half-bridge high power (>5KW) SMPS power supply?

The question is more on type of capacitor and current rating than the capacitance.

I have read some projects using electrolytic capacitors, even some computer power supply uses this approach and the capacitors are the DC Link ones too!

But as I know this is not a good choice, its better to use polymer, right?

But if you are lucky enough to find the manufacturer specifications, it's difficult to get any info about the current the capacitor will support. Some papers says that's this is based mostly on dissipation of the capacitor, I have even made an spreadsheet to calculate that dissipation, I will post if necessary, but I didn't know if this is the way to go. 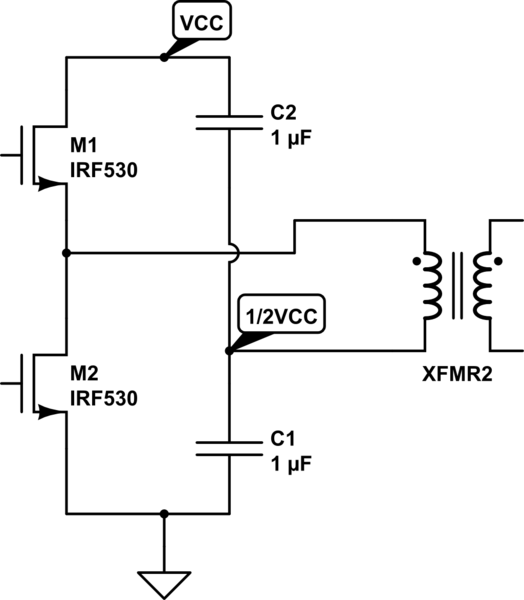 Capacitor choice is largely a matter of losses, yes. The capacitance value needs to be large enough to keep the midpoint more-or-less-fixed, with low ESR and ESL also being important. Under some transient conditions the midpoint can (and will) move around, so it's important to keep derating in mind as well. 50% voltage derating is well within reason (using 400V caps with a total DC input of 400V, for instance).

For AC-application capacitors (i.e. film caps), the ESR is often implied in the dissipation factor datasheet parameter, which is the relationship between ESR (resistive loss) and reactance:

It will usually be specified at a given frequency, which allows you to calculate the ESR.

Electrolytic capacitors generally have large ESL by nature of their construction vs. film capacitors, limiting their usefulness at high frequency. Film capacitors also have some self-healing capability under dielectric breakdown scenarios which make them a 'robust' choice in half-bridge designs.

Not the answer you're looking for? Browse other questions tagged capacitor switch-mode-power-supply component-selection or ask your own question.

0
How to test aluminum polymer capacitor for failure?
0
Why the voltage drop is so high in my Half-Bridge SMPS?
2
Selecting a capacitor for use in feedback loop
4
SMPS output voltage too low - what to look for?
2
Use of very large bulk capacitor for microcontroller power stability
2
Charging a high voltage capacitor with power supply. How exactly?
0
Selecting capacitor for SEPIC converter
0
With a SMPS charging a capacitor bank. What is the power rating of the SMPS?
1
Choosing an SMT capacitor size (and voltage) for high-power RF coupling at 300W