EDIT 3 The correct solution is shown below, in TurboJ's answer in fact, this exact issue was mentioned in the LPC4300 errata ES_LPC43x0: 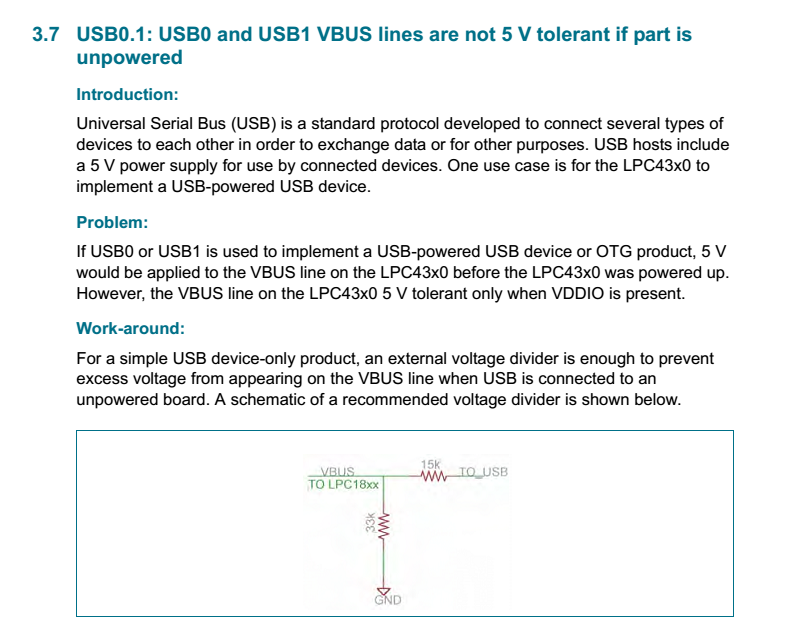 EDIT 2: I'm beginning to wonder if poor layout is to blame. The +3V3 rail is shown. Because the board is a 2 layer, I had to forego the traditional power plane and power is provided by a single 6 mil trace. I noticed that the problem never occurred on a board with no decoupling capacitors populated, but started to happen when I added the .1uF capacitors.

I have a board with a LPC NXP 4330 (ARM Cortex M4/M0 dual core) microcontroller, in a TBGA-100 form factor. The power situation is complicated because I have sensors which require precision 4V power, so the main supply needs to be a LDO drop above 4V, so it is powered in the following way:

I have noticed that on startup, the micro will start up very hot (too hot to touch) for a second, before settling down to a more reasonable temperature. When it does this, I can communicate through the JTAG just fine and run my application. It will always start up like this when connected to a 4.5V bench power supply (bypassing the switching regulator completely). The surge current is very high, up to a couple hundred of mA, as the spike in temps confirms.

When connected to the switcher (fortunately it is on another board, so it is easy to bypass), sometimes it does not start up. I assume that this is because the surge current is causing the switcher to shutdown because it goes into some over-current mode. If I disconnect the switcher from the load, plug in the battery first, and then plug it back into the load, it will cause the micro to get hot (as usual) and then work.

Is this normal behavior for the LPC 4330? It seems fairly unusual that a microcontroller would take several hundred mA to startup (where is all that current going?) Is there a way to prevent this initial current inrush when the entire circuit is hooked up.

I've included a schematic, I will need to run tests on the supply ramp up on Monday. 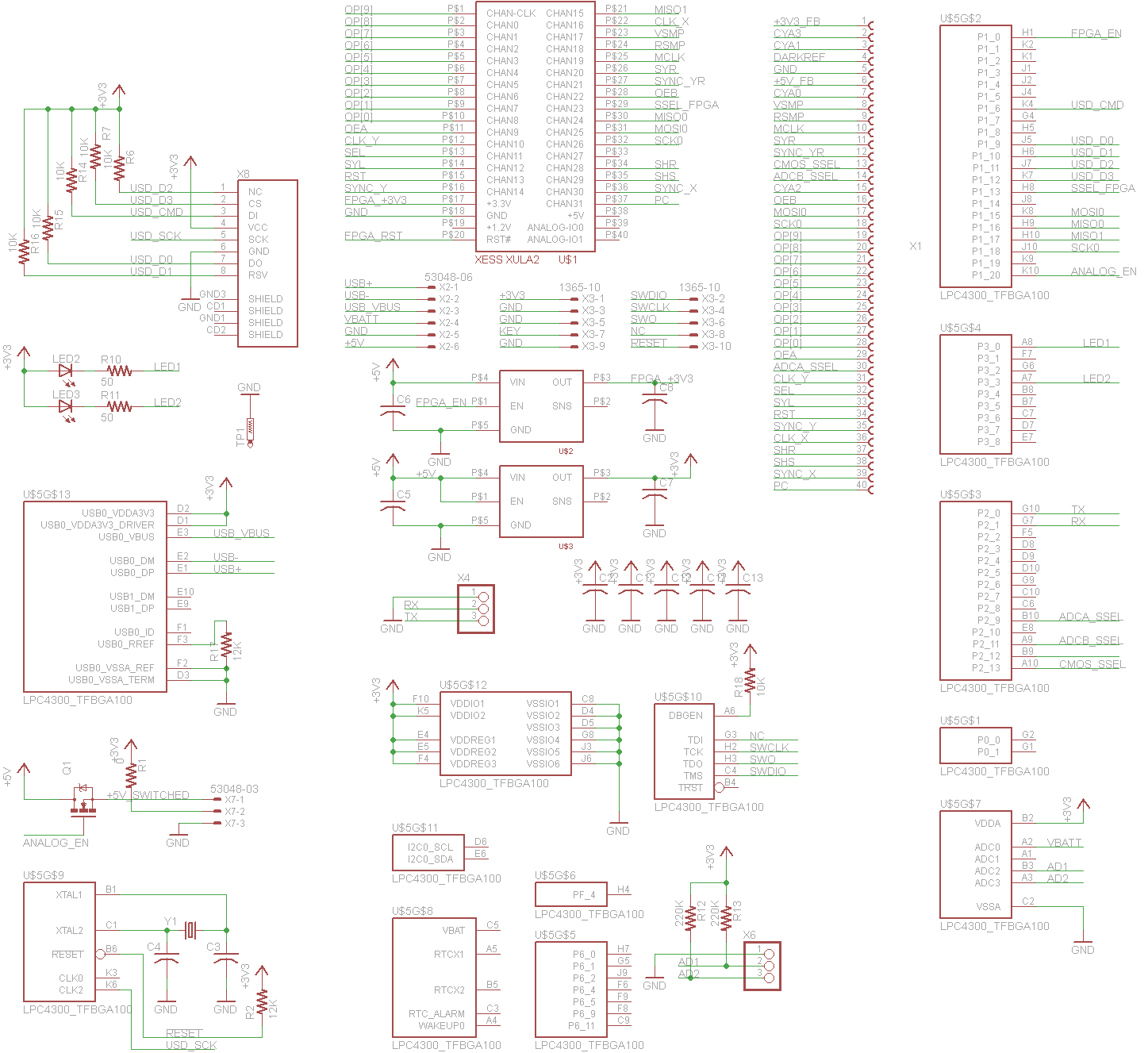 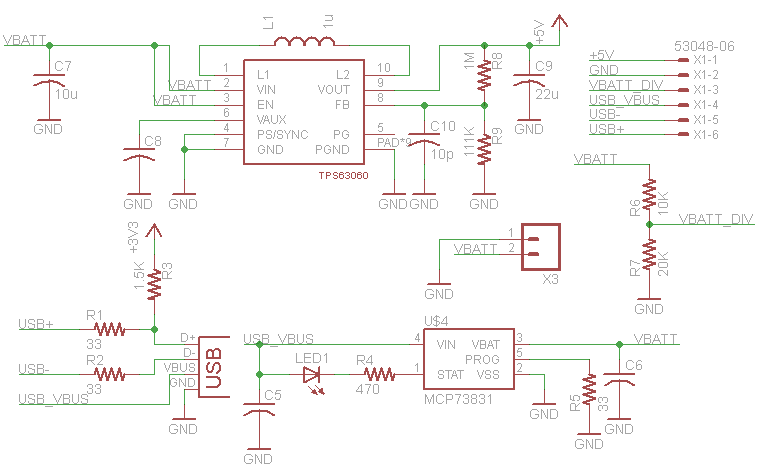 Power and USB connector board 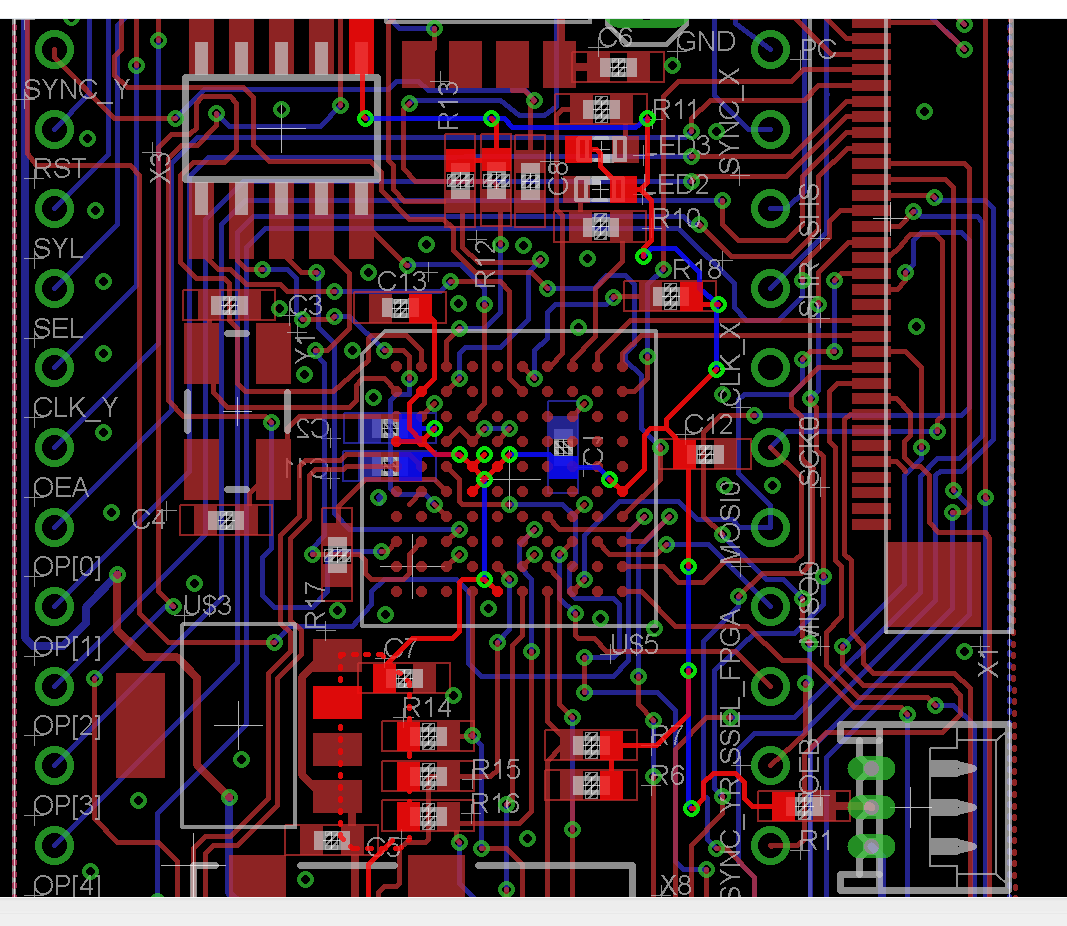 One possible source of latch-up is USB_VBUS. The datasheet of the LPC43xx allow VBUS to be 5 V only when VCC is present - but in your case this takes a small amount of time until the regulators are fired up. Consider adding a resistor in this path.

Another issue is the ON-Switch of the FPGAs 3V3 LDO. It will be enabled by default, as the GPIO pins are "weak high" when not configured. The resulting voltage level is high enough to switch the regulator on. The SNS pin must be connected to VOUT, if present. You should change the drawing in case they are not.

NXP 4330 in accordance with IEC 60134 absolute max current should not exceed 100mA. The device is rated at 80mA at 200MHz at 3.3V. It sounds like it is dissipating much more than this, so I would suspect

if have a slow startup ramp on the supply, internal instability may cause max frequency oscillations so a power on reset may help. Naturally if the chip starts oscillating from 2 to 3 V and there are interface voltages exceeding this level latchup faults may occur where the short circuit currents can exceed 150 mA per port, so check your power on sequence ramps on a scope with a current shunt. Check your interface switch is low enough resistance to switch quickly.

Not the answer you're looking for? Browse other questions tagged power-supply arm switch-mode-power-supply lpc inrush-current or ask your own question.

4
Can a linear regulator in shutdown mode have the output in parallel with a switching regulator
0
Linear regulated supply from noisy input voltage
1
Switching power supply only works when warm
4
SMPS PCB Design Signal Integrity
0
BeagleBone Black won't power up from USB
1
Can I use 2 Power Supplies in series like this?
2
LTM8073 integrated DC-DC buck converter issues