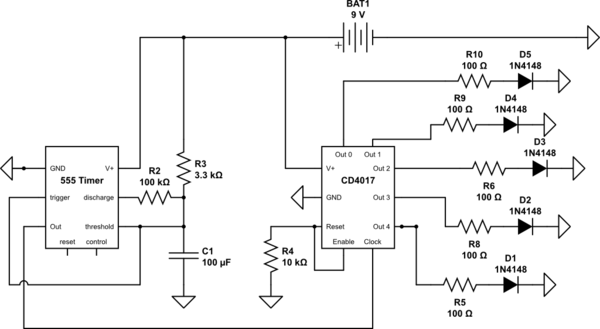 I'm attempting to make a circuit that flashes each LED sequentially. So far my 555 timer works just fine and gives me a pulse about 3x/second for the clock on the CD4017. However the LED's flash in random orders.

Note that for the sake of simplicity, I only included 5 LED's in the schematic. There's ten LEDs for the 10 outputs of the CD4017.

Any idea what's going wrong here? I'm a first year student of E.E. so I'm still learning a lot. Thanks!

EDIT: This is essentially what I'm trying to create:

Do you have the datasheet for your specific 4017? It is quite possible that you need more current than the 4017 can handle.

For example, the datasheet for a Texas Instruments CD4017BE shows (graphs on page 3) that with a drain-to-source voltage of 10V, each output pin can sink no more than ~15mA: 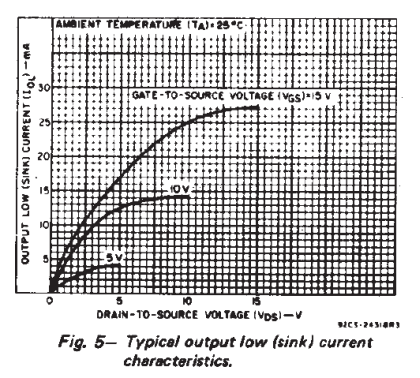 As @Tony mentions in his answer, if the LEDs have a typical forward voltage of 2 to 2.2 volts, then the 100Ω current limiting resistors you are using drop approximately 7 volts. Using Ohm's law, I = E / R, the current each output pin would need to sink is around 70mA.

Try a higher resistor value to lower the current significantly, say 10mA. The LEDs won't be as bright, but it might be within your 4017's current sinking ability and at least allow you to determine if things are working correctly.

You can figure out the resistor value to use by rearranging Ohm's law:

If that works, and you want to make them brighter, you'll need to either find a 4017 that has greater current ratings on the output pins or add some transistors.

Note that the circuit you linked has a "1K2" resistor connecting the LEDs to ground (negative). That's equivalent to 1.2kΩ which works out to slightly less than 6mA per LED.

Per @Curd's comment, I am also including the source current diagram from the datasheet. 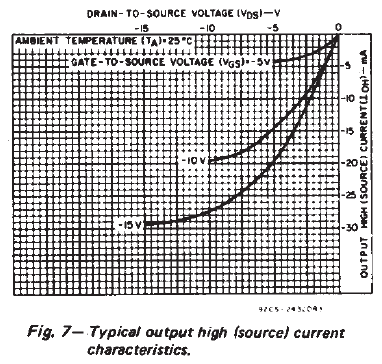 Your schematic doesn't match the "drawing."

Drawing shows a pushbutton between 4017 Vcc and the actual power supply that is not on the schematic. Is that switch actually there? If so, is it normally closed or normally open? If it's normally open, then that's your problem.

Not the answer you're looking for? Browse other questions tagged led timer or ask your own question.