What does "the resistance looking into" mean? 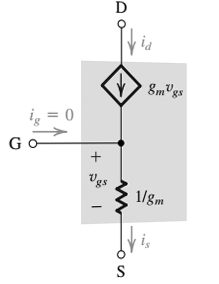 According to my understanding, whether you look into the source or into the gate, the resistance between G and S is 1/gm. If you put apply a voltage between G and S and measure the current with Ohm's law, you would find that R is 1/gm.

There must be something I don't understand. 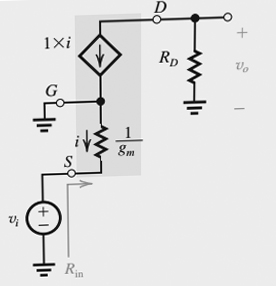 It says that Rin is vi/-i. I can kind of see where does this expression come from but I don't know the formal definition of Rin. Why is there a - in front of the i?

For the short answer:

For the long explained answer:

The author is referring to the concepts of thevenin or, equivalently, norton theorems and how they apply dependently on which node you look at. This dependence is based on a set of rules the author uses for describing a FET. Keep in mind impedance is a complex resistance that can be purely resistive or frequency dependent.

See wikipedia's articles (he also explains it in a earlier Sedra and Smith chapter): http://en.wikipedia.org/wiki/Th%C3%A9venin%27s_theorem

To add some context to the discussion, we cannot create a FET out of just normal linear elements like resistors, capacitors, and independent sources. However, we can create a model that "acts" like a FET (in a small linear operating region) by adding a dependent current source, and making this source dependent according to the rules of a FET. These rules simplify how a FET really works, but they let us approximate its behavior with normal circuit elements. Sometimes the rules are assumed or taken for granted, and the author has done this somewhat in that figure by using the rules to override our intuition of how the circuit drawn works. In a sense, the resistor he shows is an illusion that results from the FET rules. You will see later in the chapter that he draws a more intuitive version of this circuit where the gate is floating to imply 0 current in the gate. Here, he simply uses an algebraic rule to do the same thing.

In your first figure, the gate terminal is connected directly to the resistor with a value of "1/gm". Intuition would say if any voltage were applied between gate and source, a current will flow through this resistor, and that current should obey KCL with superposition, such that current from Vgs in one node should be equal to current out of its other node. You might then think intuitively that the impedance from gate to source looks the same as from source to gate, its just that resistance between them. However, one of the rules he drew is that gate current = 0, and so you must always follow this rule when it is given since it is a rule that models FETs, even if it is not intuitive to the circuit drawing. To understand why, you need to study the physical design of a FET and the author only assumes you've accepted this rule. Keep these "model rules" aspect in mind.

Let's now go back to the ideas of thevenin theorem and "looking into" circuits. Just like any circuit, we can use ohm's law to describe how it behaves or responds for these FET models. When a known voltage is applied to 2 nodes in any circuit, an amount of resulting current will flow between those 2 nodes through its impedance. Equivalently, a resulting voltage will be impressed on those nodes from a known current flowing through its impedance. We don't really care what kind of circuit is behind these 2 nodes actually because it can all be described by its impedance we "see" without knowing what's inside.

The reason he has to specify what part of the FET he's looking into is because, depending on what terminal of a FET you look at, it will behave to the only "FET rules" that apply to that terminal and do not necessarily apply to the others.

When he says "look in", he really means we are applying an input signal (either a known voltage or known current), and seeing either how much current flows or how much voltage is impressed as a result based on the rules for that terminal. When we say the "impedance seen from", we usually mean the output impedance, or that we are looking at an output signal and seeing how much current is flowing out of it at a known voltage output.

For example, take his second claim "that the resistance between the gate and source looking into the gate is infinite". If we use thevenins theorem and apply any input voltage from gate to source, and then use Ohm's law, we can see what he means:

But his rule for FET gates overrides that Igate = 0, and so R will be infinite for any voltage applied from gate to source - no current will flow!

It is tricky because even though there is a voltage applied and no current is flowing between gate and source, a current from the drain could still be flowing into the node where all 3 current paths meet, because the drain's own rule with the dependent current source says a current flows through it. Since Igate = 0, any of the drain current goes through the node and all of it exits out of the source terminal (from KCL). Since that current doesn't flow in the gate, its not a part of "looking into the gate".

Now we can take his first claim "that the resistance between the gate and source looking into the source is 1/gm". As was just mentioned, even though there is no current from gate to source (infinite impedance), a current can still flow in the source because the drain's dependent current source is always equal to the voltage between the gate and source times its transconductance gain factor gm:

So now, we must again use an ohm's law equation to determine the equivalent impedance "looking into" the source to gate.

First we apply the voltage across the 2 terminals we wish to find the impedance of. Again it is Vgs. This time, however, since we are looking into the source, the current is not 0, and so we already can see there will be a difference in impedance compared to looking in the gate before.

Since the drain current is dependent on this applied Vgs voltage, the current from the drain is going to be:

Now again, using KCL at the junction node, all of this current from the drain must go through the source since igate = 0. We already know enough now to find the impedance.

If, the voltage applied is Vgs, and the current we see at the source is Vgs*gm, then:

So, it is actually an algebraic coincidence that the R = 1/gm, even though it is drawn in his figure like a real resistor between the gate and source. This is not a real resistor, just a circuit model with enough rules to make it act like a FET instead!

By doing this, we can gain insight to how the FET model is working and how it simulates a real FET in saturation mode. Any voltage applied to Vgs will not draw a current from Vg to Vs, but it will force a current through the drain to source by the FET rules, and this current is proportional to the amount of voltage we have at Vgs.

If we make the transconductance gain factor gm very large, then we only need a tiny amount of voltage at Vgs to create a large current through the drain to source, and as a result the resistance 1/gm will approach 0 so that it looks like there is no impedance from gate to source (only when looking from the source's point of view because of the rules!). This shows how a FET in saturation is much like a voltage controlled current source.

I was initially very annoyed by this 'resistance looking into' concept.But now I can see how simple it is.I will try to explain it in lay man's language.

How do you calculate resistance between two points in any circuit ?You apply a voltage find the current and do V/I. Here is something that beginners overlook as they are used to working with 2 terminal devices where whatever current goes into one terminal comes out of the other so we simply mention their resistance/impedance. But in generalized circuits it is not always true as a simple(for illustration) example) consider a BJT transistor biased by some means. Now if you want to find resistance between two points,say between emitter and base,you'll apply a voltage source between them but you see that the current that will go into the base will not be the same as current that will come out of emitter.So what current you will use to find resistance by V/I. So here comes the role of 'looking into concept' if you use current going into base then you get 'resistance looking into base' and if you use current coming out of emitter then you get 'resistance looking into emitter'.

In general, the "resistance looking into" some pin is the small-signal equivalent resistance that we "see" when we force some small change in voltage into that pin, and measure the change in current going into that pin.

For example, in this illustration

If you put apply a voltage between G and S and measure the current with Ohm's law, you would find that R is 1/gm.

Where do you get that idea from?

If you put apply a voltage between G and S and measure the current (using some ideal circuit simulator, such as SPICE, or wiring up some amplifier circuit with a FET, and then applying voltage pulses to the pins and measuring the pulses of electric charge going into those pins), you find that the current into G is different from the current into S.

How do you apply Ohm's law with a single voltage and two different currents?

This particular circuit is a small-signal model including an idealized approximation to a FET. Like all small-signal models, it neglects constant DC voltages and currents, and "the voltage" and "the current" represent small pulses or other small signals riding on top of the constant DC voltages and currents that would be present in a physical circuit.

In a physical FET, a thin layer of insulator physically blocks current from flowing into or out of the gate, causing the current into the gate is zero. Then conservation of charge and charge repulsion causes the current going into D to always equal the current going out of S and vice versa.

And for the -ve sign, it's negative as Iin is conventionally taken going into the FET or out of the Vin

Note: Vin in all statements refers to test voltage, which is used while calculating input impedance.