As explained in a previous post, I thought I could use a MOSFET as alternative to the PUT originally used in experiment 11 of "Make electronics" from Charles Pratt. 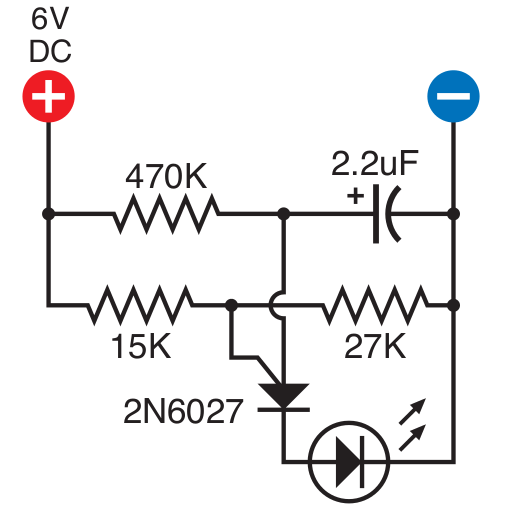 And my proposed alternative with MOSFET below: 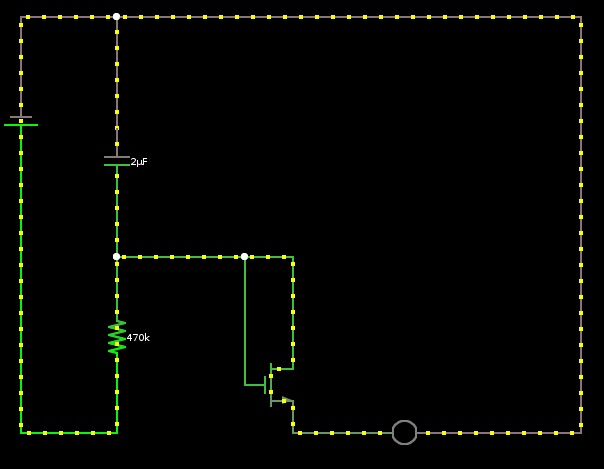 As you can see, the original circuit is a slow speed oscillator, making the LED flicker. For obscure reasons, my proposed alternative doesn't work. Any idea how to make it work?

It doesn't work because they are radically different components.

The PUT is a strange beast; it's like a hybrid between a bipolar junction transistor and an avalanche diode. It has non-linear behaviour: once the current flowing through it has gone above a certain value, its resistance collapses and it becomes "more on", until the current falls much futher than the trigger level.

This lets the oscillator work: it charges up the capacitor, until the trigger of the PUT is reached, at which point it discharges through the LED until the current falls below the turn-on point, and the PUT turns off again.

In some ways this is quite a lot like the 555: you could almost just substitute it with the "discharge" and "trigger" pins wired to the capacitor-resistor junction and the "threshold" pin wired to the 15k/27k voltage divider.

(For practical purposes the 555 obsoletes the PUT, which is why everyone is suprised to find the PUT in a book that's in print today)

In your circuit, the MOSFET will just adjust itself into its linear region such that the gate-source voltage is at the turnon point, and stay there. There's no nonlinearity to produce oscillation.

I have finally implemented a working alternative (a special thank for pjc50 for his solution, and also thanks to the other contributors).

First, I understand now that searching a solution based on the N-channel enhancement mode MOSFET is a pretty dead end (or overkill at least).

Second, the 555 timer seems a pretty easy solution (although the chapter about it in charles pratt's Book make electronics comes much later in the book, and is pretty intimidating for the newbie I am).

And here is the circuit (based on circuitLab doc, thank you Tut for the suggestion about the current-limiter resistor). 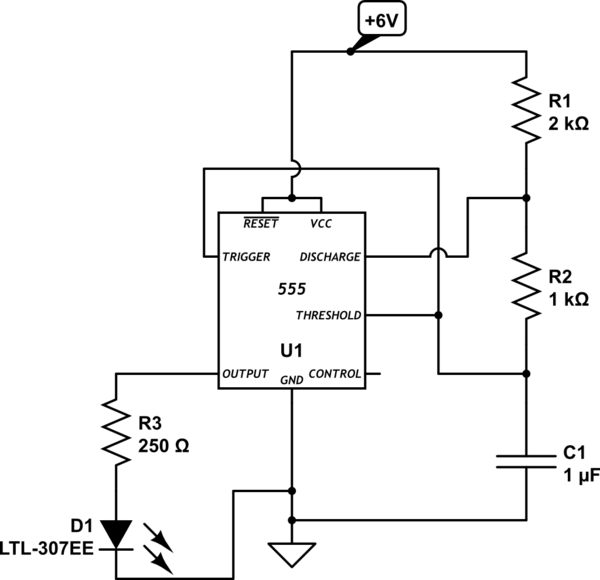 Abstract from the book practical electronics for inventors (paul scherz) :

So, trying different values for R1 and R2 makes the led flash slower or faster.

I assume you mean an N-channel enhancement mode MOSFET, since the other three major classes of MOSFET are even less suited to this circuit. (You made me guess by using a generic FET symbol here instead of a proper MOSFET symbol.)

Even with the "proper" type of MOSFET here, you're right, it won't work.

The core issue here is that a PUT lets you set a high trip voltage for this circuit, which is high enough to light the LED, as the PUT dumps the 2.2μF cap's charge through the LED briefly before the PUT turns back off.

For one thing, the MOSFET's threshold voltage — VGS(th) — will be well under the LED's forward voltage — Vf — so even if it does turn on, it will do so below the point where the LED can turn on.

I think you'd want the cap and resistor swapped, too, but that's a relatively minor point.

You can get to where you want to go from here by adding parts. You could even build a "programmable threshold MOSFET with hysteresis" — PTMWH — and have something that, externally, operates like a PUT.

Not the answer you're looking for? Browse other questions tagged mosfet oscillator or ask your own question.

12
How to build a 2N6027 PUT?
2
PUT Base Resistors Question
0
Why won't these two BJTs connected in series work?