Drawn out question in regards to DC power to battery backup

Story: I have a lego train that is modded to run off of a 9v train track rail system that was a control function of 0 to 9 volts when fully on. LEGO does not make the motors that can run on these rails ( such as a regular model train does) and thus have made use of a trickle charge system that has a bridge rectifier and uses the circuit that is included in the LEGO LiPo battery pack that controls the charge time,rate,etc... 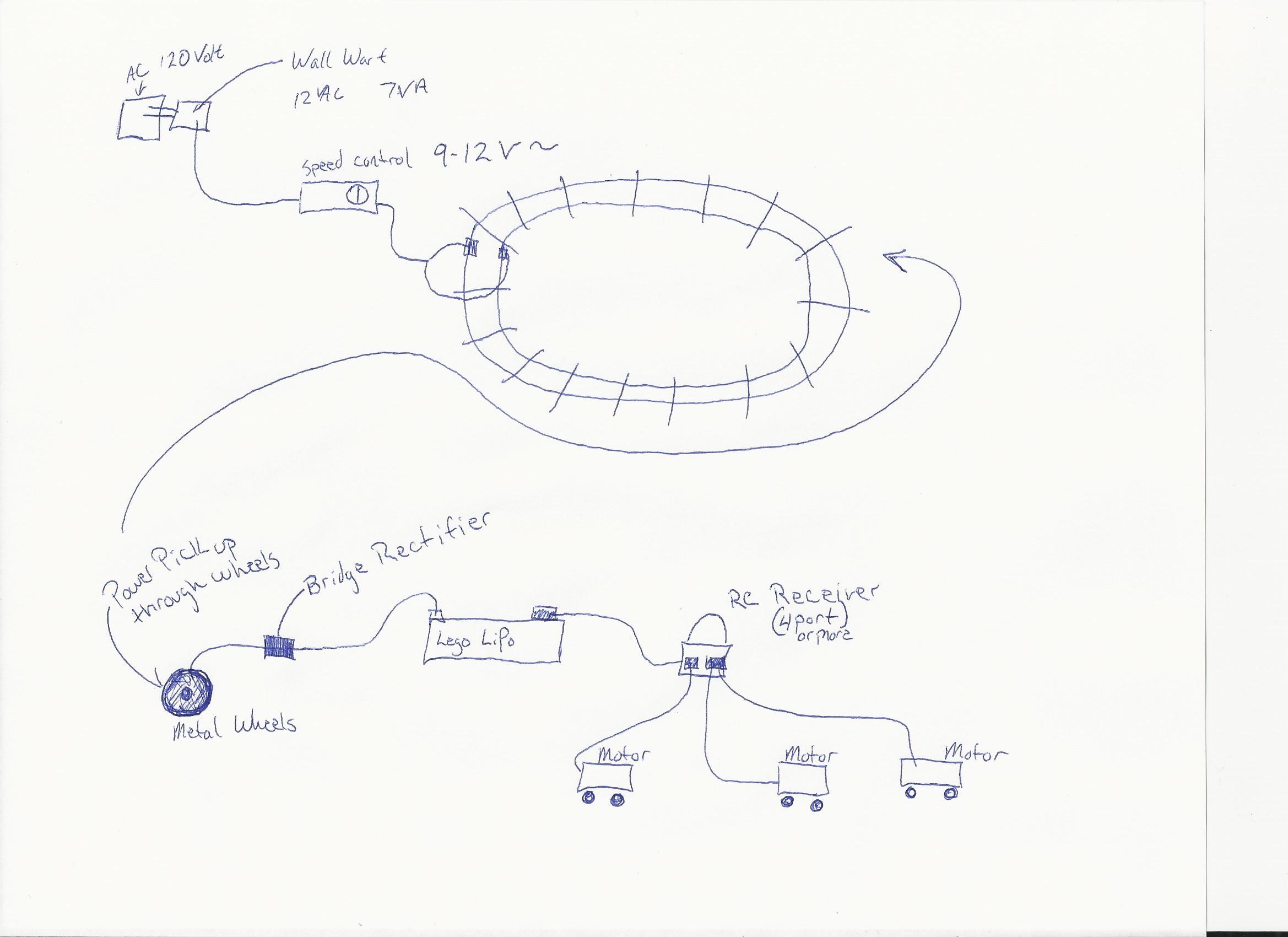 Here is a picture of what I have going on.

The system consist of ac wall wart that breaks the voltage down to 9 volts thus is controlled by a voltage control (0 to 9 volts) to metal rails. Train engine has motors that will take the 9v dc power which are powered through the trickle charge setup through the LiPo battery.

Question: How to I come up with a circuit, diode, etc to switch from this 9v dc power to the LiPo battery in a time of power loss?

Is there a better way to do this whole system as a whole, if needed I supply the needed info such as pics, measurements, etc...

The LEGO LiPo battery is rated for 7.4 Volts, I believe. Thus, a single diode would be enough to switch between the 9 Volt rail supply and the LiPO when the rail voltage fails or falls below 7.4 Volts.

Note: If the speed control is DC instead of DCC, then in any case when you set the throttle to slow, the rail voltage will drop below LiPo voltage. This means that below a certain speed setting at the throttle, the loco will continue to run at the speed defined by the LiPo, and will not drop lower - instead, the rail supply will simply not be used until the throttle is turned up again.

This following schematic addresses cases where the rail voltage does not drop below the LiPo voltage. 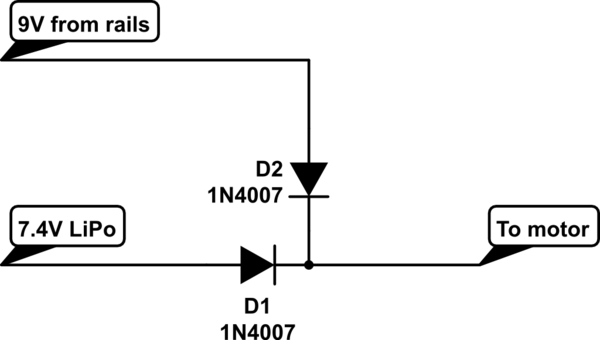 If the 0.7 Volt diode drops are unacceptable, use a high current Schottky diode such as the Vishay 95SQ015 instead: 0.25 Volt drop at up to 9 Amperes.

If the intent is to continue using rail voltage and DC speed control until the rails actually are supplying practically no voltage (say down to 2-3 Volts or so), and then switch over to LiPo power, that too can be done - but the loco would then speed up to a fixed speed as determined by the LiPo's supply, until rail voltage came back up to the chosen threshold value.

To achieve this, a Schmitt Trigger takes the voltage from the rails as input, while its supply voltage is from the LiPo cell. The output is used to drive a switching solution, such as a MOSFET, to switch between rail supply and LiPo supply for the motor. The supply would come from the rail until the rail voltage drops below the Schmitt Trigger's threshold voltage that you preset. If this is the solution you are looking for, a schematic can be added if desired.

A simple schematic for achieving the objective described in OP's comments: 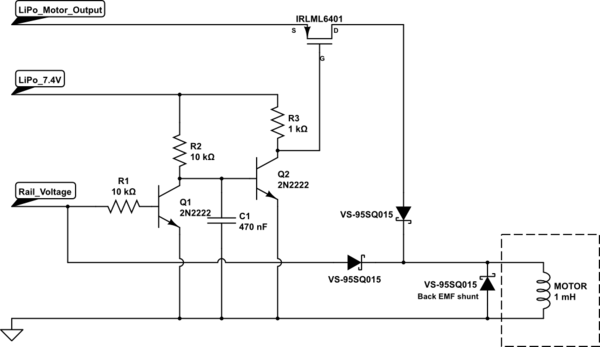 Alternatively, more complex logic circuitry needs to be added on board the loco, to distinguish between crawling speed as determined by the controller, and no-power-on-rails, and to lock the no-power voltage from the LiPo to a defined value (i.e. a predecided speed). This however is a pretty strong case for DCC instead of DC. If you are already on DCC, then it's no big deal.

Not the answer you're looking for? Browse other questions tagged power lipo model-railroad or ask your own question.