What is "common-mode" noise?

Can someone explain what "common-mode" noise is, and how it can be problematic?

I understand "noise" on a signal in general. If I have a "noisy" +5V rail on a circuit board, I'm not going to be getting a constant value of +5, it will be bouncing around above and below that nominal value... ... but still relative to circuit COM.

My very vague understanding of "common-mode" noise is that it is where both sides are varying equally together. (This is where my understanding breaks down) That is, the pair is bouncing around with respect to ... ... to what? Earth ground?

What is common-mode noise?

Practically all integrated circuits (and circuits in general) have a pin named "ground" or "GND", or the datasheet says things like "connect VSS to ground".

When transmitting data "a long distance", the wires act as antennas and can easily pick up a few volts of noise, and also radiate noise. So, for example, an output pin on a chip in one box may transmit a "0" as about 0.5 V and transmit a "1" bit as about 2.5 volt, measured relative to the ground pin of that same "line driver" chip.

So how can the receiver possibly know whether the transmitter is trying to send a 1 or a 0, when it gets a voltage like 0.9 or 2.2 ?

Because of this, data transmitted over long distances is often sent using differential signaling over a balanced pair, often a twisted pair. In particular, USB, CANbus, and MIDI cables include a single twisted pair for data; "2-line" telephones and FireWire use two twisted pairs; CAT5e Ethernet cables include four twisted pairs; other systems use even more pairs. Often (but not always), there is some other "ground wire" in the same bundle of cables.

The common mode voltage of CLK is the average of the two CLK wires, (pCLK + nCLK)/2, measured at the receiver -- relative to the GND pin of that receiver.

The common mode voltage of MOSI is the average of the two MOSI wires, (pMOSI + nMOSI)/2, measured at the receiver -- relative to the GND pin of that receiver.

People who design line drivers try to make them pull the "p" line up just as much and at the same time as the "n" line goes down, and vice versa, so the average voltage (measured at the driver) is constant -- in this example, the average at the driver is a constant 1.5 V. (Alas, they are never completely successful).

If there were no noise, then the common mode voltage would also be the same constant value -- but alas, it is not.

There are 3 main causes of common-mode noise:

how can common-mode noise be problematic?

"Common mode voltage" is simply the average appearing on both signal pathways. It's easier for me to think of it in the context of two inputs of a differential amplifier, where the common mode voltage is unambiguously defined as \$(V_+ + V_-)/2 \$. Whether this number reflects what some consider noise or what others consider signal is irrelevant with respect to definition.

Now, as for why its problematic, sometimes it is, sometimes it isn't. Usually, my goal is to have all EM noise appear to a good amplifier as common mode, and use twisted pairs to achieve this. By "Good", I mean an amplifier with a high common mode rejection ratio. For such an amplifier, differential signals (\$V_+ - V_-)\$ get amplified and common mode voltages get attenuated (VERY attenuated if you're doing it right). If you don't use twisted pair, each signal path can see a very different pattern of EM noise, so the EM noise is no longer common mode, but differential.

So, back to "why is it problematic"? -- its less problematic than differential noise, but not necessarily a magic technique for ridding signals of noise, especially if the hardware isn't built to optimally attenuate common mode signals.

Correct, they are both bouncing around relative to earth or whatever you call your reference 0V. Imagine it like a battery on a spring - the battery voltage stays constant but the battery itself is flying all over the place. Yeah I know, it's a bad analogy!!!

Typically, common mode noise refers to both wires of a differential pair bouncing relative to the power supply of the device which is taking input from them. Whether the bounce is measured relative to the negative rail, positive rail, or some point between doesn't generally matter much, because in cases where common-mode noise matters, it's often an order of magnitude more significant than power-supply noise.

"Common-mode noise" is a fundamental concept in electronics. Yet, because it appears in a lot of related but different contexts - amplifiers and signaling, 120 V or 230 V power supply, or EMI/EMC - just to name a few, it has many seemingly contradictory definitions. This situation creates so much confusion among beginners.

For example, EMC engineers may tell you: "Your system's radiation is coming from the 5-volt DC cable due to common-mode noise." And you don't understand what they're talking about.

In my opinion, none of the existing answer is satisfactory because they don't explain this problem. My answer is an attempt to clarify this confusion in the context of EMI/EMC.

A Current Definition of Common-Mode Noise

When we are speaking of analog or digital signaling with a differential amplifier, the voltage definition is often used - it's the noise across a signal and a common ground reference. However, when we are talking about it in a more general sense, it's often unclear where the "common ground" is. Thus, it's more useful to use a current definition of common-mode noise.

To understand what I meant, consider the previous 5-volt DC power supply example. We have an electronic device powered by a 5-volt DC supply. The power is delivered by a DC cable with two wires: + 5 VDC and GND. We can represent this system in a simplified schematic. 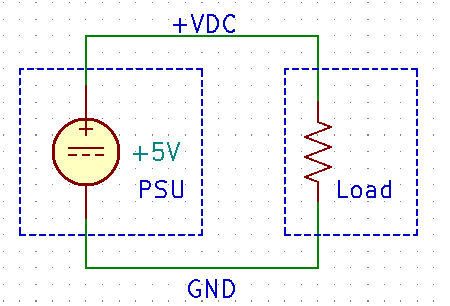 However, if we perform this experiment with a real switched-mode power supply, and a real circuit board with several digital logic chips on it, you'll see something different: Ivdc may be 500.0025 mA, while Ignd may be -499.9975 mA. To our surprise, at the ground wire, the 5 μA of current is missing, and there's a net current of 0.005 mA (5 μA) flowing into the load. This 5 μA current, is the common-mode current.

Thus, we have our first definition of current-mode current: If we have two conductors, the current that flows on both conductors in the same direction is the common-mode current.

But KCL tells us that "what goes in, must come out", and the current must return to the source. How can the current travels on both wires on the same direction? What's going on? It's easy to see the answer once we realize that (1) we have AC current, not DC current. Because both the switched-mode power supply and the digital chips on the circuit board work by switching rapidly, the frequency components of the current can be as high as 100 MHz. (2) Parasitic capacitance is everywhere in a real circuit, and at 100 MHz, the impedance of a 5 pF capacitor is just 318j Ω. 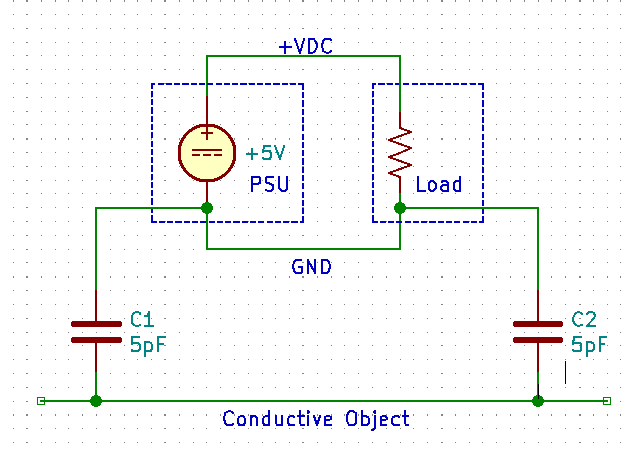 Thus, the 5 μA common-mode current simply jumps to a nearby conductor via the parasitic capacitance and returns to the source via an alternative path. The exact path taken by the current is often ill-defined and somewhat unpredictable. Often it's the metal enclosure. For systems without a metal enclosure, It can be whatever conductive object that happens to be here nearby: a metal table, a file cabinet, or literally the ground. 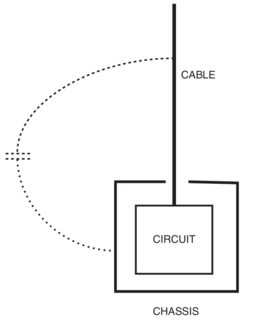 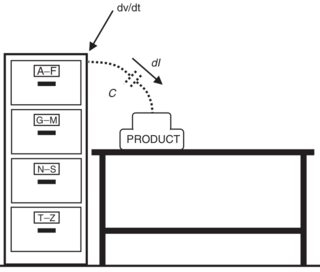 A special scenario is when the system is a 120 V or 230 V mains power supply. In this case, we indeed have a well-defined reference. The AC mains have three conductors: Live, Neutral, Earth, and the enclosure is grounded to Earth, a current that otherwise should return via Neutral often returns via Earth instead. Thus, this explains another definition of common-mode noise: The noise between Live and Neutral conductor in the AC mains is differential-mode noise, the noise between Live/Neural and Earth conductor is common-mode noise.

Common-mode noise current cannot be measured by a multimeter, because they are created by RF current at hundreds of megahertz, with a magnitude of a few microamps. Instead, in EMI/EMC pre-compliance testing, it's measured by a spectrum analyzer with an RF current probe. And the result is a noise voltage, not a current. When the probe is characterized with a transfer impedance curve, the voltage can be converted to current.

Here's an example of a commercial RF current probe. 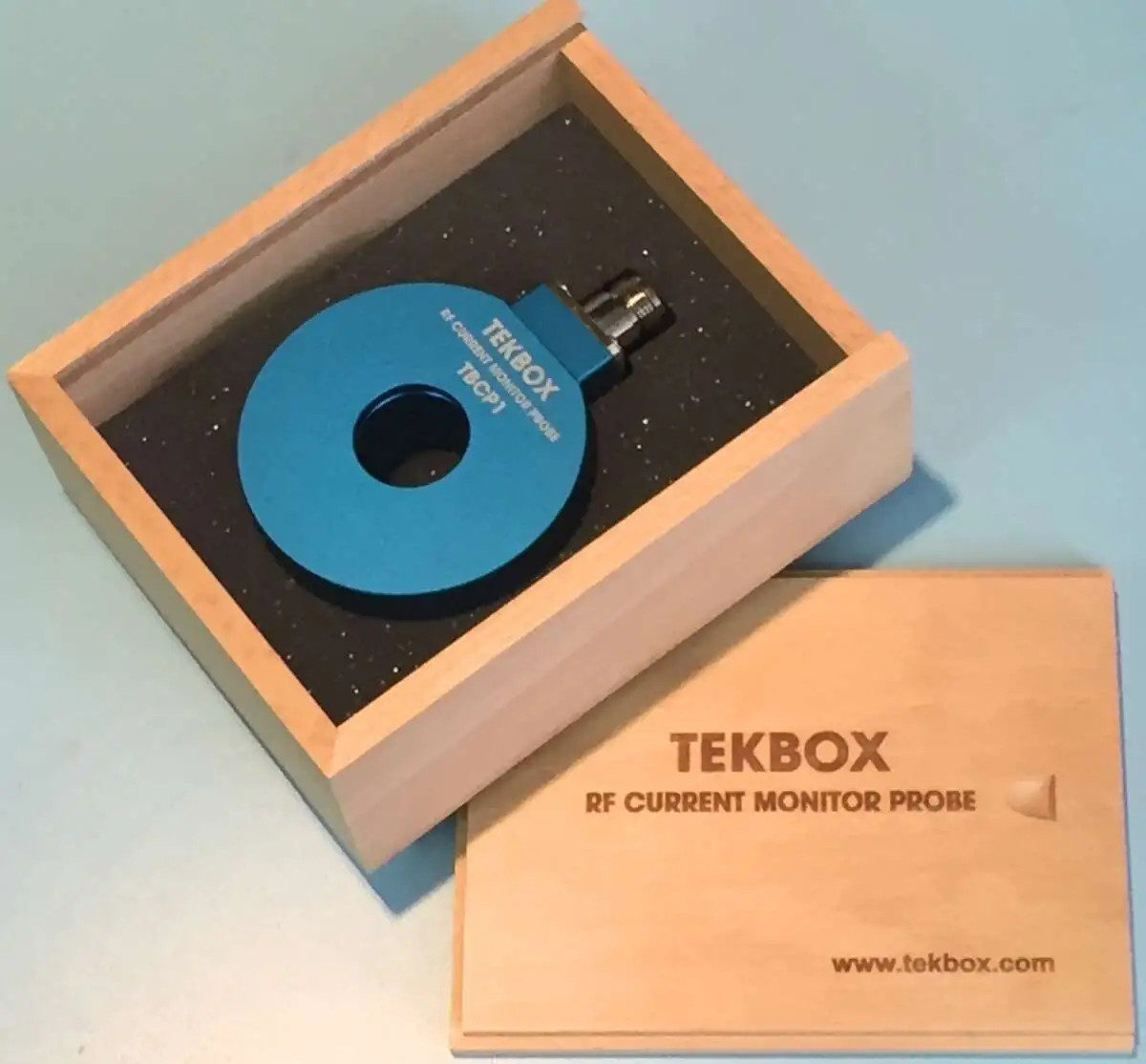 If one doesn't have a spectrum analyzer, a low-cost solution is using a SDR dongle. A $10 RTL-SDR is enough to show the frequency peaks of these EMI sources. Another option is amplifying the current probe with an RF Low-Noise Amplifier (LNA), then analyzing the result on a digital oscilloscope via FFT is also an option. Both methods are unreliable and unsuitable for quantitative measurements, but good enough to be an educational demonstration.

The path taken by the common-mode current is often ill-defined, and can be whatever conductive object that happens to be here nearby: a metal table, a file cabinet, or literally the ground. Thus, to make a reliable and repeatable measurement in conductive EMI compliance testing, solid metal plates are grounded to Earth and placed on the horizontal and vertical directions near the device-under-test, so that it creates a predictable path for common-mode current. 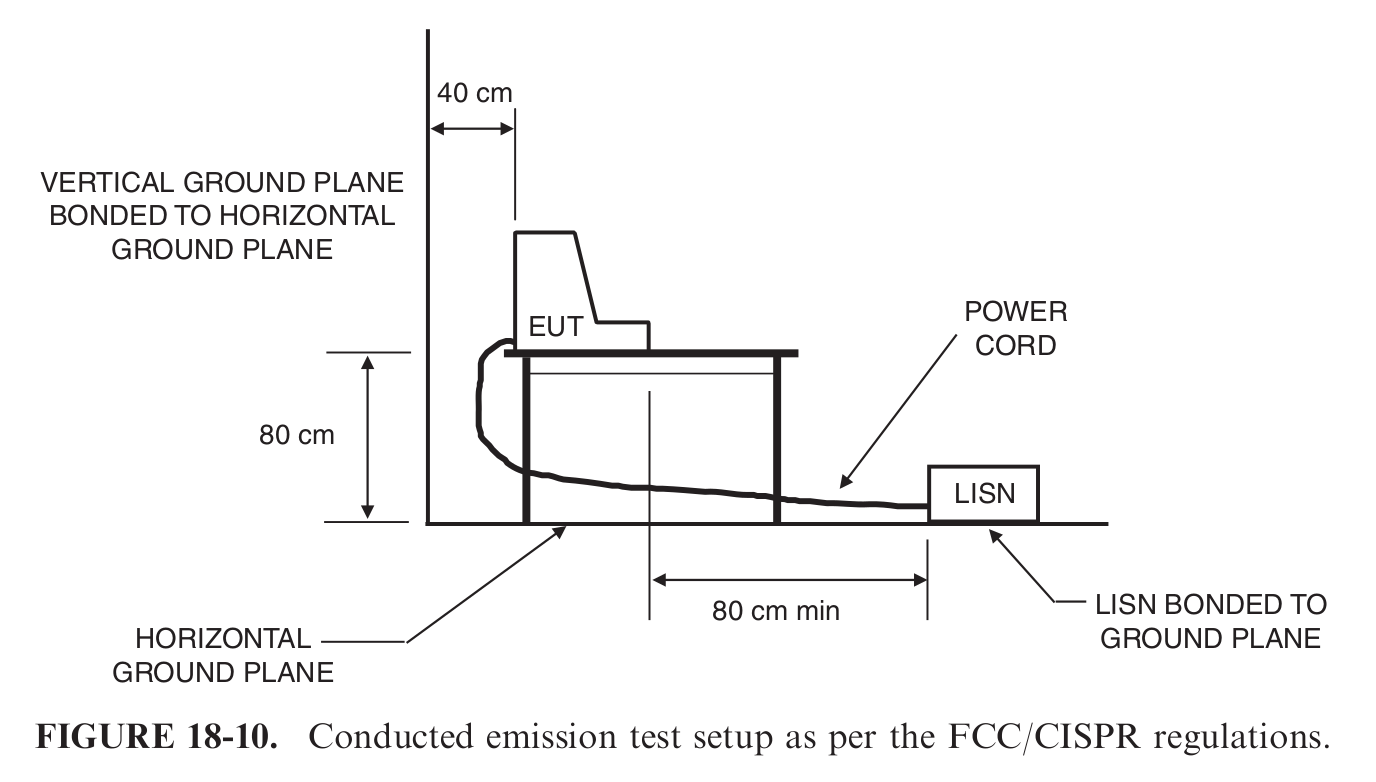 For a simple pre-compliance testing at the workbench, Ott suggested that one can use a DIY lab cart in the following arrangement to approximate the test environment. 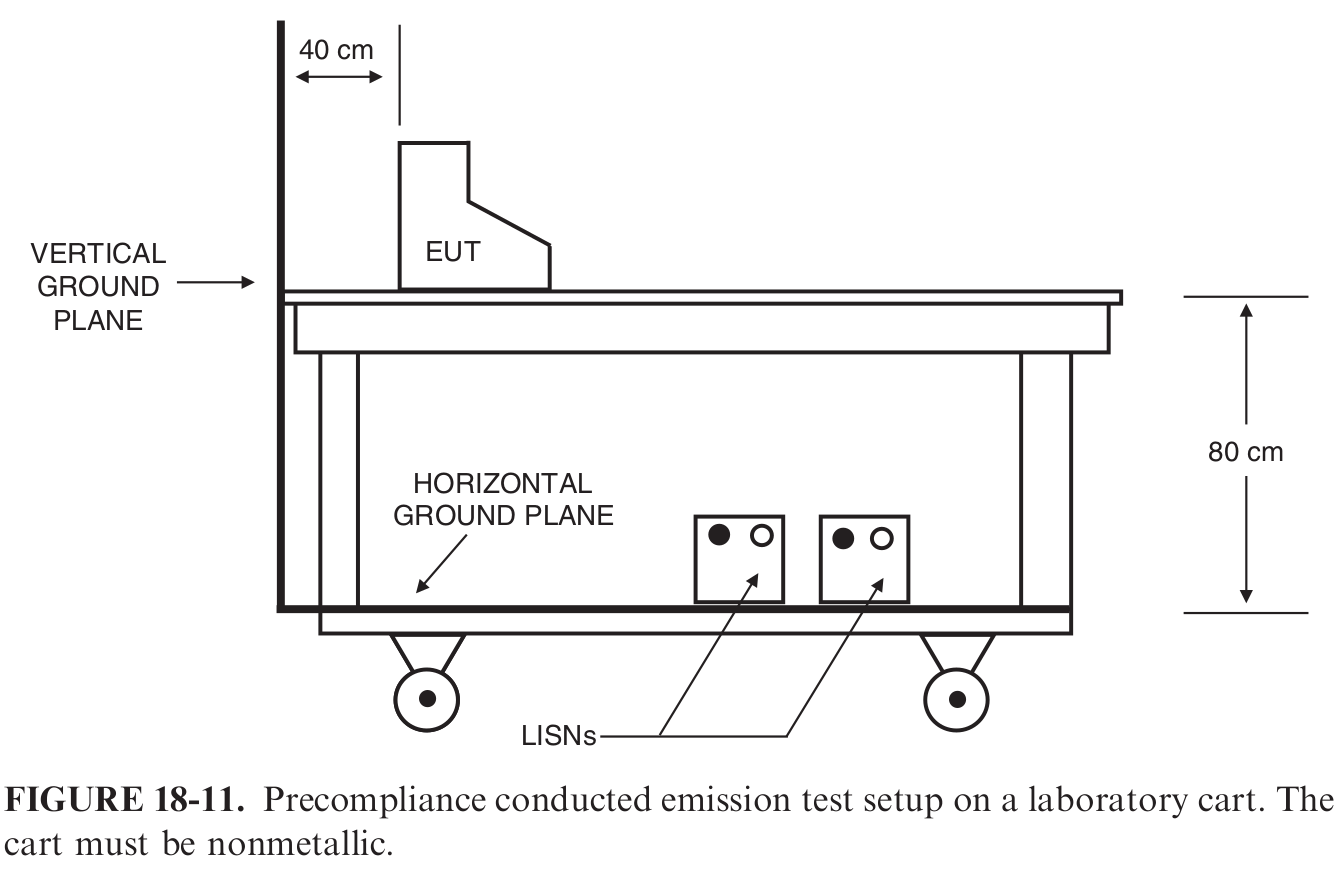 Not the answer you're looking for? Browse other questions tagged noise common-mode or ask your own question.

0
What is Common Mode Noise
9
Differential to single ended
6
Why is noise is considered to be a "Common Mode Signal"?
1
What is a common mode signal in a layman's language and why do we care for it while studying Differential Amplifiers?
2
Why is common-mode noise on a power line bad?
4
Twisted-pair wire's effect on Common mode noise
-3
Differential pair how to decide track width, spacing and lenght matching
1
Interfaces with differential pairs during PCB Design
1
Crosstalk between Ethernet and Analog Signals on PCB
0
Inverting Opamp on Noisy Ground. Would an LC filter help?
See more linked questions