What is the meaning of JK flip flop's J and K?

According to P. L. Lindley, a JPL engineer, the flip-flop types discussed below (RS, D, T, JK) were first discussed in a 1954 UCLA course on computer design by Montgomery Phister, and then appeared in his book Logical Design of Digital Computers. Lindley was at the time working at Hughes Aircraft under Dr. Eldred Nelson, who had coined the term JK for a flip-flop which changed states when both inputs were on. The other names were coined by Phister. They differ slightly from some of the definitions given below. Lindley explains that he heard the story of the JK flip-flop from Dr. Eldred Nelson, who is responsible for coining the term while working at Hughes Aircraft. Flip-flops in use at Hughes at the time were all of the type that came to be known as J-K. In designing a logical system, Dr. Nelson assigned letters to flip-flop inputs as follows: #1: A & B, #2: C & D, #3: E & F, #4: G & H, #5: J & K. Nelson used the notations "j-input" and "k-input" in a patent application filed in 1953.

Here is a link to a Jack Kilby biography that says he started at TI in 1958 and doesn't mention JK flip flops at all.

If you look halfway down column 13 of this patent filed in 1953 (Granted 1958) you will see mention of inputs to a flip flop called J and K. This patent pre-dates Jack Kilby's time at TI by 5 years: - 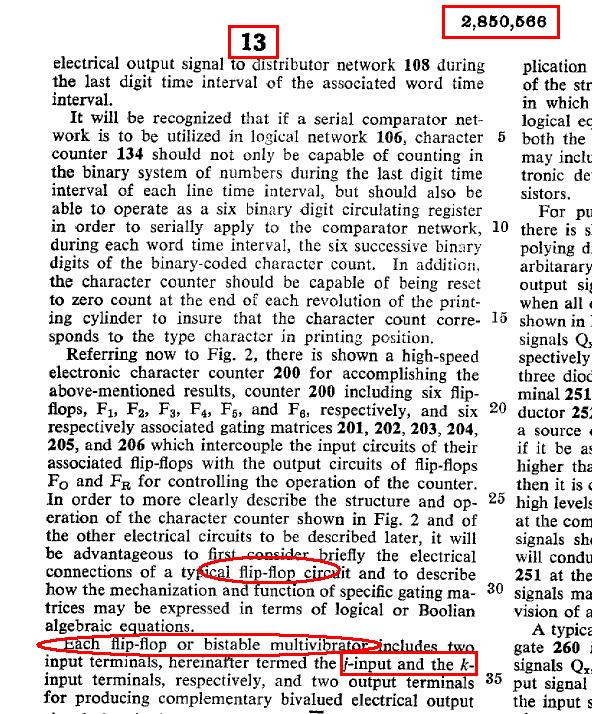 Not the answer you're looking for? Browse other questions tagged flipflop terminology history or ask your own question.

11
What does the D stand for in “D Flip-Flop”?
0
D flip-flop with a synchronous reset, R
0
Little confuse about the truth table about D-flip flop
0
The problem about active low ,and how can i know it from the waveform
1
Is there a way to change only one of the outputs of a D flip-flop?
5
I know what a Reset signal is, but a Set/Reset signal? Isn't that impossible?
0
What does the T stand for in “T flip-flop”?