AM and Suppressed carrier SSB

So if I have AM, then to transmit information, I modulate the amplitude of energy peaks in a wave that has a frequency of say 10 kHz.

So normally, the individual peaks in the wave occurring at regular interals would be say 1 Volt high. But by changing the height of the peaks to half volt quarter volt and every thing in between, and having someone tune in to the right frequency, they can hear my voice, because I am now changing their speaker energy output by changing the peaks in my carrier wave.

So SSB says, you can just change the troughs depths instead, or just the peaks height or whichever, it's all the same.

But then suppressed carrier SSB. how can you suppress the carrier?. What are you modulating or changing the peaks of then? And how does the receiver separate your signal from other random noise, without a carrier to check for modulations on?

SSB is not how you describe but first regular AM as broadcast by the radio stations. This you appear to correctly describe except for the demodulation which you omit.

In AM the amplitude is modulated but not by so much that the carrier amplitude becomes zero at any point. This is regular AM and for instance a \$1V_{peak}\$ carrier might reach (due to the effects of modulation) peaks of 1.8V and troughs of 0.2V: -

A simple diode detector will demodulate this so this method is suitable for public broadcast radio stations because the radio receiver is simplified by using the diode detector.

Suppressed carrier AM is like regular broadcast AM but where the modulating signal pushes the carrier beyond the limits of broadcast AM. The result of this is that the carrier phase becomes reversed every half cycle of the modulating signal. A simple diode detector no longer produces any decent recovery of the audio signal. Here is a picture of what happens when AM is over-modulated (heading towards a suppressed carrier scenario) and you try and use a simple diode detector: - 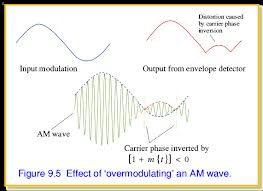 Why is it called suppressed carrier - the carrier inverts every half cycle of the modualting wave and if you used a spectrum analyser there is no trace of the carrier despite the resultant modulated carrier being centred at the carrier frequency: - 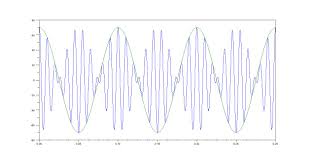 Recovery of the modulating signal (i.e. the original audio signal) is much trickier and that is why this technique is not used in broadcast transmitters in order to keep receiver cost and/or complexity low.

SSB usually is a further modification to suppressed carrier where one of the sidebands is either totally or partially suppressed in order to create a smaller bandwidth in what is being transmitted - more power can be focussed into the single remaining sideband and with a more complex receiver it can be adequately received. To understand what SSB looks like you have to look at the frequency spectrum of DSBSC (Double sideband suppressed carrier) and imagine it is lopped off on one side: - 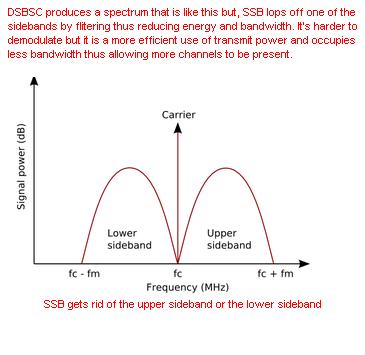 Not the answer you're looking for? Browse other questions tagged am or ask your own question.

1
Do commercial AM radio stations broadcast a carrier?

3
RF power envelope
3
How to obtain the in-phase carrier for synchronous detection of an AM signal?
1
Why is the RC value of a demodulator near the geometric mean of the period of carrier and message signal?
0
Amplitude modulation transmission distortion
0
A 50 kW carrier is to be modulated to a level of 85%. What is the carrier power after modulation?
0
Demodulate a AM signal from the carrier using Matlab
0
Is possible to modulate the upper and lower sides of a carrier with two distict signals?
0
How is the signal Multiplied with the Carrier in AM
0
Why do carrier waves sound silent on radios?
0
PWM/PPM with external carrier