Final RF envelope of FM and AM are the same

Effective RF electromagnetic power profile is effectively the same for baseband audio content modulated by AM or FM.

Question, Is this right?

I would conclude that the RF power envelope should show something very different from FM to AM. In fact, the FM power plot should literally be flat, or spread spectrum power.

Let me start by saying that the document you refer to compares AM with narrow-band FM and I would expect pretty similar results. Narrow-band FM is not used by music broadcast stations just in case you were wondering and my previous mentions of FM in other questions were based around conventional broadcast type FM.

Why is it narrow band -

Conventional broadcast modulators have a frequency deviation of 75kHz and generally limit the audio baseband to 15kHz. In other words the ratio of deviation to baseband width for broadcast is 5:1 whereas the document you are referring to has a ratio of 0.25 - that's a whopping difference of 20:1 and so you need to compare apples with apples.

I also note that in the linked document there is a discrepency in the amplitudes of the AM and FM signals. See below: - 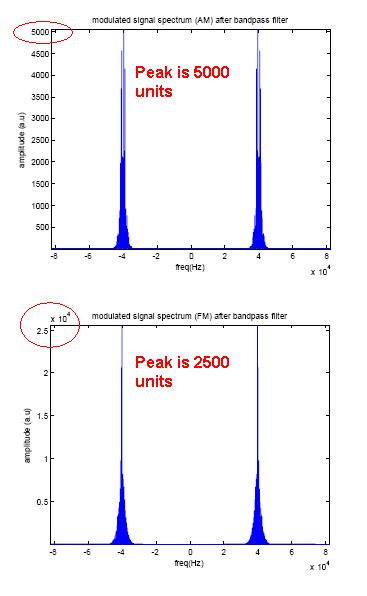 Now this doesn't seem reasonable but it may be explained by someone!! With a mind to examining the total power in the AM and n-b FM cases, it seems to me that the AM signal with its double sidebands has much more power than the FM signal.

Hopefully someone might explain this discrepency in my thought process. I guess I'm looking at how much blue ink there are on both diagrams and there appears to be more blue (and hence power delivered to an antenna) in the AM case compared to the FM case.

In short I have doubts about this document with respect to what it is trying to demonstrate and its methods.

And now, to the OP's question (at long last)

Effective RF electromagnetic power profile is effectively the same for baseband audio content modulated by AM or FM. Question, Is this right?

Neither of the modulated signals in this report correspond to real world radio signals. The AM signal is double sideband (DSB) which is why there is no signal at the carrier frequency (40 kHz) in the spectrum plot.

Indeed, according to the paper, the AM signal was generated by a direct multiplication of the modulation signal and the carrier which is the definition of DSB.

In broadcast FM, as pointed out by Andy, the parameters for deviation and modulation bandwidth lead to a much wider bandwidth signal than the modulation. In fact, the advantage of FM over AM in terms of signal to noise ratio arise from this increase in bandwidth. For an explanation of this, look in any communications textbook.

I would also point out that the vertical scales in all of the plots are labeled a.u. which I am assuming stands for arbitrary units. That means you should not directly compare the amplitudes of the AM and FM spectras.

Not the answer you're looking for? Browse other questions tagged fm am or ask your own question.

3
RF power envelope
0
The primary selection criteria for choosing FM vs. AM is dynamic range
1
Envelope detector
1
How to amplify the envelope of a signal at envelope demodulator?
6
Can AM and FM signals at the same frequency be separated?
29
Are audio cassettes FM or AM?
1
Envelope Detector Improvements?