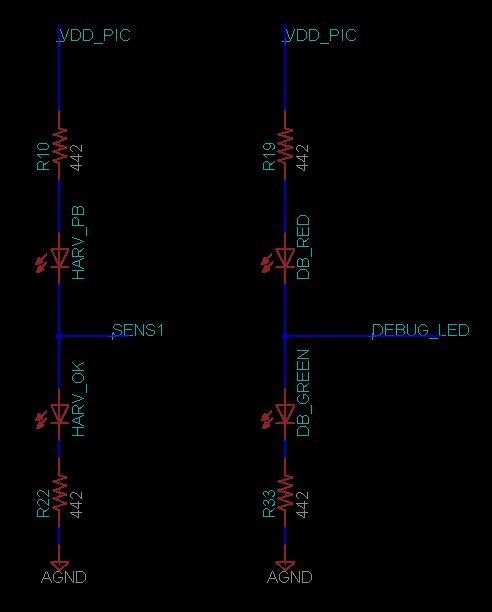 The button is connected to INT0 (Pin 43) of this PIC and VDD. Upon button press Pin 43 is being pulled high. The pins that are being manipulated by the button press are pin numbers 42(RB6) and 41(RB5).

On each pin there are 2 LEDS, totaling 4 LED's across both pins. Each pin is used in the following structure:

The debugger used is the MPLAB ICD3

I have written the following firmware for this objective:

There are multiple problems I will try to keep cohesion.

I personally believe the hardware has been grounded well, and I have personally have not seen any obvious hardware problems.

If you guys need any additional information let me know.

Any solutions or debug methods you can offer will be greatly appreciated, I am beginning to loose hair thanks to this problem.

All of the above symptoms feel like they are been caused by the exact same possibly hardware problem? If you guys have experienced anything similar I am looking forward to hearing it!

It seems that you need a pull-down resistor on INT0,(you do not seem to mention you have one), my clue to needing a pull resistor is your problem number one, where your body affects the change of state. This problem arises because you have a high impedance input (INT0) and it is floating, there is no guarantee that your INT0 is low because it is left floating until you pressed the button and held high. Adding the pull down resistor will defualt your INT0 state to low, also remember that your probe looks like a cap with a resistor in parallel, so every time you probe your circuit you are basically placing a pull down resistor. The other issue I see is that your button is not debounce, adding a delay of a few millisecond will not debounce an input.

The cause of the wrong LED states was because I was not allowing enough time between port change commands.

It should actually be:

The only clue to this on the datasheet is that it takes a cycle to transfer the data from the port latch to the actual port.

The port can also just be updated with:

For the same effect.

Not the answer you're looking for? Browse other questions tagged microcontroller pic c embedded microchip or ask your own question.