I am using an LM324 and three TIP122 transistors to drive three 40V 40W led's. The problem I am having is the LED's don't shut of all the way (a very dim glow remains). If I use only one op amp (out of the four on the chip) and one transistor, the LED turns off properly. If I use three of the four op amps, the LED's do not turn off.

I have tried placing a resistor (20K) in line with the negative feedback to see if I was having a current bias problem, but that didn't help. I also substituted power MOSFETs for the TIP122 without luck. I also tried buffering the input using one of the op amps as a voltage follower. This actually made the problem worse. It seems there is a biasing problem, but I don't know where or how to test this.

One thought was my issue comes from the fact that the LM324 isn't rail to rail, but I am not sure about that since I can get it working with one op amp. If the input voltage is zero, I am seeing about 1.5V on the output of all three op amps.

Is there leakage between op amps on an LM324? Why would one LED work but not all three?

Any help would be greatly appreciated. Thanks.

I can't post an image of the circuit because I don't have a "reputation". However, you can find it here. 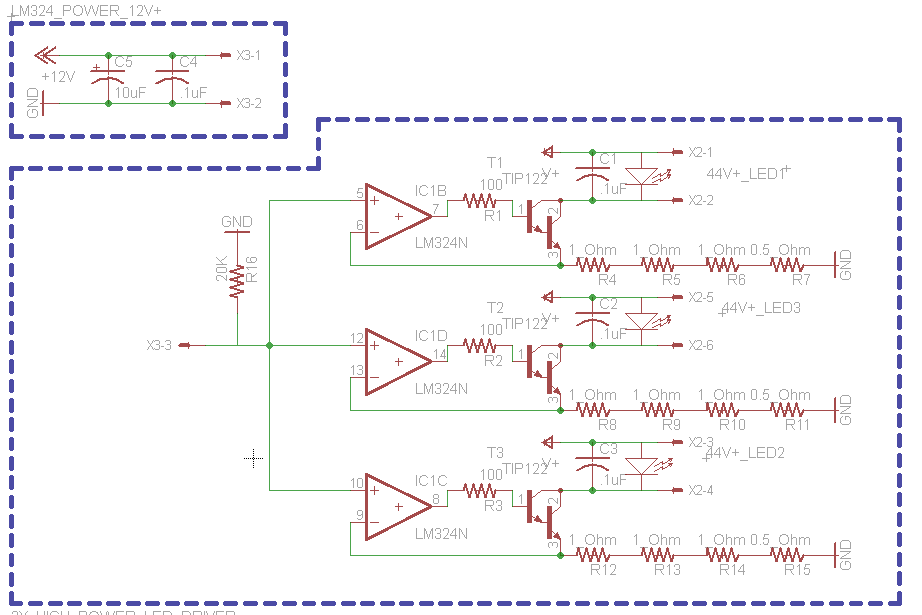 So you're seeing about 1.5v on the output, but the LM324N datasheet says that the output can drive down to at least 20 mV (into a 10K load). It also seems unlikely that something is pulling the output high(er). This would imply that the problem is on the input side of things.

The datasheets says that the inputs can go to 0V, but I suspect that this is not entirely true. It might be that they only go to "almost" 0v. Even a couple of mV higher than 0v might be enough to mess up your circuit.

I suggest changing your circuit. It's a rather major change, unfortunately. The easiest (from a testing standpoint) would be to switch to a different opamp that can run off of a +/- power rail. If the opamp has a negative rail then it will be fine if the input is close to 0v (and not V-). You might be able to run the existing opamp that way, but the datasheets are ambiguous about that (and I'm too tired to look into it closely).

A different change, which would be much more complex, unfortunately, would be to change the circuit so that the input to the opamp never gets close to 0v. There are several ways to do this, but none of them are easy. One way is to put the current sense resistors on the high side, between the power rail and your LED's. Then use a resistor-divider to bring that voltage down within the range of the opamp. This might require changing some polarities and such (swapping the + and - inputs), but don't take my word for that-- actually figure it out first.

Not the answer you're looking for? Browse other questions tagged led operational-amplifier current driver control or ask your own question.