I've built a nice programmable switch basing on Raspberry and a relay board. It's fine for driving common 230V appliances but the relays seem rather flimsy; I wouldn't trust them to run 10A of current through them. I'd like to connect devices that potentially take about much - heaters for my home etc. The obvious solution is next stage relay rated for currents of that order; 230V input from my switch, 230V over some thick wire from a rated socket, the load on output of the relay.

What I'd like to ask - is that enough? I know driving the relay driven by logic pin requires quite a bit of "glue electronics", an optocoupler, a transistor to amplify signal from the optocoupler, protecting diodes, resistors regulating the levels etc. Is anything of that kind required when driving one 230V relay from another? Any extra electronics between them, or can I safely connect them directly like in the schematics above?

Due to inductive spikes mainly if the relay contacts open during the peak current portions of the AC cycle, I would suggest an MOV (metal oxide varistor) across the contacts of the first relay. Alternatively you could place it across the load (the coil of the second relay). The MOV should be rated for at least 275Vrms (such as Littelfuse V275LA2P). If the final load is inductive, you should place one there also (or one each across each contact of the second relay).

A snubber is often used when switching AC inductive loads and could be used here as well as (or in place of) the MOV. This is made of a resistor and capacitor in series which will slow the rise time of and attenuate the inductive spikes. Red Lion makes a snubber (SNUB0000) or you can make your own. Note that an MOV will clip the inductive spike while a snubber will also slow the rise-time and thus greatly reduce interference with other equipment. From the Red Lion datasheet:

The R-C Snubber is intended to suppress the “inductive kick” from motors, solenoids or relay coils. High energy noise spikes are generated whenever current is interrupted through an inductive load. These noise spikes may interfere with associated equipment causing erratic operation and may also accelerate relay contact wear. Applied across an inductive load, the R-C snubber suppresses the noise spikes and extends contact life.

I agree with Andyaka's comment: "Why don't you find a single relay that can do the job?"; although due to your specific circumstances, two relays also make sense.

You don't need much to drive a relay from a microcontroller pin - a transistor and a diode is enough. Something like this: 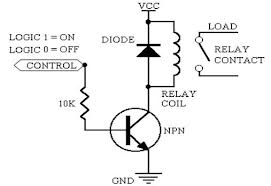 Regarding your question of driving another relay with a relay - you have to use a relay that can be driven by 230V. Something like this would work. 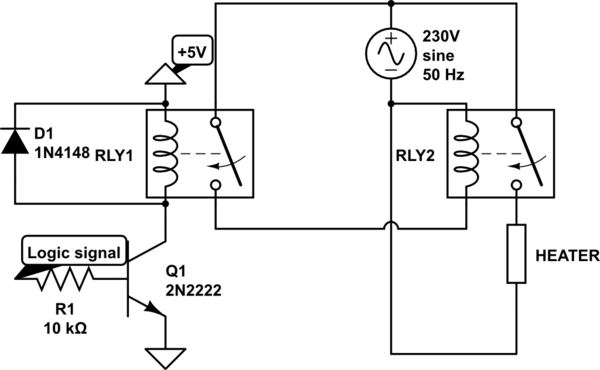 The arrangement shown will work fine so long as RLY3's actuation voltage is 230 Volts AC.

Such cascaded relay arrangements are commonly used in practice, for instance in certain electric locomotives which need to switch massive currents under "control-by-wire" (software interface).

Make sure the two relays are not very close to each other, so that they do not interfere with each other.

Like Anindo says your RLY3 needs a 230V coil, and these relays may be more expensive. Why can't you use a common 12V or 24V relay for RLY3 and drive it from the RPi with a MOSFET. You won't need RLY1 that way. The RPi can drive any logic level FET, and FETs for drive currents in the order of 100mA or less are easy to find. You may have trouble finding a sturdy relay for PCB mount, but that would also be the case for a 230V relay.

Not the answer you're looking for? Browse other questions tagged relay ac or ask your own question.

1
Will a tvs diode help my relay with inductive loads?
0
Relays in series to handle initial short circuit
1
Need help connect relay to surveillance camera
0
What type of wire should be used for 230 v ac while using this relay
0
Running a Relay on DC
6
Beginner's second PCB circuit design: AC to DC
1
Help me understand my campervan split charge relay
1
DC Relay Module for Switching ~200 VDC @ 1.4A with Arduino Controller