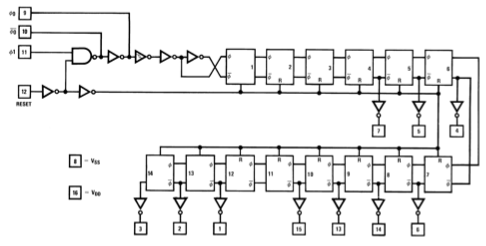 One possible cause for the design decision was that it was a packaging/budget constraint. They had the 4040 model which was packaged with 16 pins and they were able to manufacture a new counter with different features relatively easily by keeping it so similar:

The 4060 adds two extra digits to the counter along with two pins for directly connecting a crystal oscillator. So this would mean four extra pins. So to keep the counter at the same number of pins, they had to omit the output from some of the counter bits. It seems somewhat arbitrary to me which pins you would omit. The two MSBs of the counter seem to be the most important, since those two are one of the main features that differentiate it from the 4040 counter.

I don't have any sources to back up my claims, so treat this answer as partial, and with some skepticism.

Not the answer you're looking for? Browse other questions tagged digital-logic integrated-circuit timer cmos or ask your own question.

5
Odd number frequency divider
2
Shift registers - what happens at single clock pulse?
7
Very high speed counter (around 1.5 GHz to 2 GHz)
3
Poor clock output from Spartan6 FPGA
4
Should I use an FPGA output for an MCU Clock?
1
How to 'Shift in Parallel' in a shift register?
1
8-Bit Program Counter Implementation
2
What is the point of inverting RAM output?
1
Median Filter FSM Modelling