However, most chips I've seen have an on resistance of nearly 60-80 ohms. This is way too much surely for video which is terminated with 75 ohms? If I'm switching with 75 ohms in series with the required 75 ohm termination, I've effectively created a voltage divider and halved the video signal. It might work, but the video would probably lose considerable quality; at worst, I'd probably lose sync.

As an additional question, related to this one, would there be any bandwidth issues with video switches? I'm using composite (CVBS) NTSC or PAL colour video.

All the video processing I've seen happens at high impedance, then the video is re-amplified for transmission.

For example, in my sketch below, the resistance of the switch doesn't matter because it is feeding the high-impedance video buffer amplifier.

If you search your favorite distributor for "video buffer amplifier" you will find this is a relatively common part. You can find them with fixed gain of two for exactly this application.

In my breif examination, it appears that there are two basic approaches. The first is to use an analog mux such as the one you have identified, and then buffer the resulting signal with a high input impedance amplifier. Maxim has a pretty good write-up on how to do this using a separate mux and amplifier. They use the switch on-resistance as part of the 75 ohm matching network.

I found a single chip (NJM2244) that combines the analog switches with a matched 75 ohm driver. This would allow you to have only one very small chip with very simple controls. 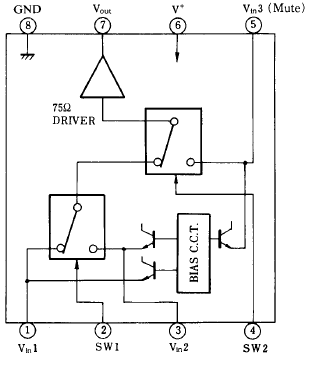 Another method uses much lower resistance switches. This particular writeup uses switches intended for high-speed logic, and they have an on-resistance of about 5-8 ohms. That small of a resistance could probably be tolerated fairly easily. 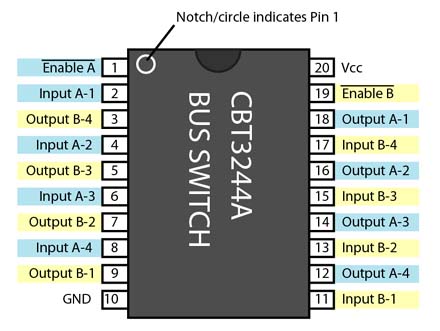 Each bus switch chip has two banks of SP4T switches, so you could switch stereo audio in addition to the video signal. If you're switching only two sources, this could be a single-chip solution as well.

Regarding the bandwidth of composite video, the highest figure I've seen is 6.5MHz, which isn't really that high frequency. You won't have difficulty finding amplifiers for these frequencies, and the wiring shouldn't be very sensitive (aside from adjacent noise sources).

3
Image processing on PAL/NTSC
2
DC restoration of a video signal
2
Ringing on my OSD project
1
Synchronising to a colour burst
3
How to generate a composite video
3
How to switch composite video signal inputs to one output
1
Sync Pulse generator for Composite Video. (Stabilizing video)
1
Composite Video Driver Design - PAL
1
Why does NTSC video have separate reference blank and reference black levels, and how does this affect format conversion?