Can somebody explain me what actually is a saturation current of an inductor. You may consider one inductor too and explain the things. This is very much confusing for me. Somebody give me a clear cut info on this.

Saturation current only applies to non-air cored inductors or transformers. Basically the core material (iron or ferrite) can no longer linearly increase the amount of magnetic flux with an incremental increase in current.

Inductance is defined as the amount of flux produced per amp so for twice the current you'd expect twice the flux but if this ratio starts to reduce (due to saturation) the inductance is perceived to reduce and this can cause (in some circuits) an increase in current which lowers the inductance even further leading to a rapid hard-saturation situation.

Well-known is the B-H curve and this is a good measure of where saturation occurs: - 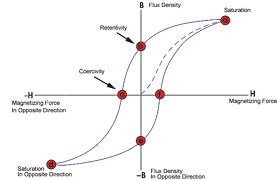 This is a rather genralized picture - a lot of inductors are reasonably linear then have a marked flattening at the top and bottom of the curve.

wiki has a useful article about it.

Basically the current produces a magnetic field in the core.

This magnetic field is normally directly proportional to the current. There comes a point when the core magnetic field cannot increase any more - it has become 'saturated'.

The level of current in the coil at which the core becomes saturated is called the saturation current.