The following circuit modulates the SIG wave with a 1kHz CLK signal and produces the OUT resulting wave.

What I don't understand is why the OUT wave has less amplitude than then the SIG wave, when the SIG and the CLK are in phases!

If we zoom in we can see some detail: 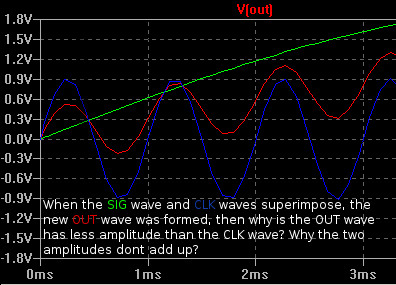 How to calculate the amplitude of the OUT wave?

Because you seem to be using a simulator in your question, try putting the voltage sources in series with one of the sources at ground then measure at the open end of the other. This should confirm to you that using resistors you get each sinewave attenuated by 6dB.

The issue is you're not adding the two waves, you're taking the midpoint between the instantaneous value of each.

Basically, the resistor divider you have constructed has an output that is a function of the voltages at each end. In this case, since the two values are equal, the voltage divider basically splits the difference between the two values.

If you want to actually sum the inputs, rather then average them, you will need an active circuit (usually implemented using an op-amp).

Not the answer you're looking for? Browse other questions tagged sine or ask your own question.

2
Circuit to pass voltages above a threshold level
6
walking ring sine wave generator
5
Determining amplitude of a 2 MHz sine wave
3
What's a good set of PWM values to make sine waves for a 3 phase motor?
3
Modified sine wave inverter
1
Why does my active low pass filter produce triangle waves?
25
What is a sine wave?
5
How to generate a controlled frequency sine wave using a microcontroller like PIC18F4550?