I want to use Power over Ethernet (48V, 30W best case) to power something that's going to require up to 15W at 10V. That means I need to step down the PoE voltage but step UP the max current. As I understand it, a buck converter will have the input current off part of the time, so I would lose potential power. A linear supply obviously would not do.

I need efficiency in the usual sense, that the supply will not waste too much power. But with the input limited in current, I need the thing putting out current nearly full-time. Would a large capacitor on the input of my step-down converter do the trick?

First, it's absolutely expected that the output current and input current (averaged over a switching cycle) are not equal in a switching converter. If the currents were equal, the efficiency couldn't be any better than a linear regulator's.

When the switch (Q1) is closed the input current does indeed go into the load. But part of it also goes to recharging Cout, whose voltage has drooped during the "off" part of the cycle.

When the switch is open, the load still receives current, but it's supplied by D1 and Cout.

So there's no concern that by not drawing input current during part of the cycle you might fail to provide power to the load. It's just part of how a buck converter works.

Would a large capacitor on the input of my step-down converter do the trick?

A large capacitor (Cin in the schematic) won't change the fact that when the switch is open, no input current is drawn.

What it will do is, when the switch is closed, allow much of the input current to come from Cin instead of from the upstream voltage source. This current will be flowing in a relatively small loop, and so not produce so much EMI issues as if it had to flow from the upstream source, however far away that might be.

It also means that whatever inductance there is in the lines from the upstream source to your circuit won't cause Vin to droop during the "on" part of the switching cycle and interfere with the converter's operation.

I realized you're worried about the peak current drawn during the "on" part of the cycle being higher than the PoE can supply.

Yes, a larger Cin will help with that, by smoothing out the current drawn over the switching cycle. But basically any capacitance on the load side of the PoE will also help.

The choice of operating frequency and L1 value will also affect the peak current draw on the input.

As I understand it, a buck converter will have the input current off part of the time, so I would lose potential power.

Not really. Most fixed-frequency PWM-controlled switch mode power supplies (like a buck converter) use an inductor as an energy storage device. The field stored in the inductor during the switch on-time is what provides energy during the switch off-time. Converters with energy storage allow for actual conversion - higher output voltage (with lower current) or lower output voltage (with higher current).

The current linearly ramps up in the inductor during the on-time of Q1.

The current linearly ramps down in the inductor during the off-time of Q1. The inductor voltage is clamped to Vout less a diode drop.

In CCM, the midpoints of the two linear current ramps is going to be your DC output current. Also, since the inductor is continuously sourcing current (even when the switch is off) the capacitor voltage is a DC level with triangular ripple proportional to the inductor current waveform.

If the converter is in DCM, there's a third state where the inductor is completely discharged. You must also include the dead-time in the average output current calculation. Also, when the inductor current is zero, the burden is entirely on C1 to keep the output up, but DCM is a light-load phenomenon so it's not an issue. 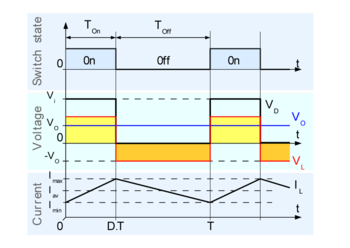 A linear supply obviously would not do.

A linear supply doesn't work by storing energy inductively, so regulation is achieved via an adjustable resistance (usually a transistor or a MOSFET) - input current must be greater than output current because of this.

I think you are just missing the key point: Power is conserved, but current is not. A switching regulator is going to take 80-95% of your input power and provide it to the output at a different voltage. The regulator converts voltages and so inherently your currents will be different. But power (which is volts * amps) will be conserved (with the difference being the heat lost in your converter).

So 48V @ 0.625A = 30W. Your converter will give you, if it were 90% efficient, a maximum of 10V @ 2.7A = 27W The other 3W would be waste heat in your regulator. It can always put out less than 27W, because it is designed as a voltage source (rather than a current source) so it is setting the voltage and it will supply current as needed.