Is the Holzer effect the same as the Hall effect? (looking for replacement sensor)

I was looking for a replacement component for what I thought would be a "Hall effect sensor" (used in an electric scooter throttle handlebar). I had bought a replacement throttle about a month ago, but now it's dead again so I dismantled one of them and figured I'd just replace the sensor this time.

Here's a scanned image of the sensor (the white is some glue they used to keep it in place): 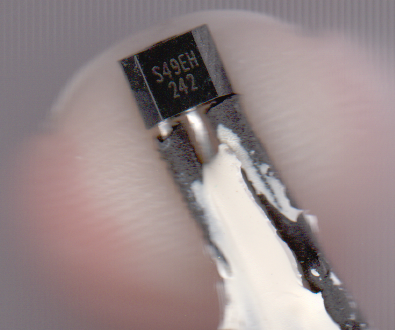 A search on S49EH got me to the site of the Chinese manufacturer, who claim it is a "Holzer element". Wikipedia has no mention of "Holzer" on the Hall effect page, however another source seems to describe the same effect calling it the Holzer effect. Is it really the same or is there a slight difference I missed?

I'm still at a loss to find a correct replacement though. A search at my local electronics dealer on "nonlineair hall-effect sensor" gave zero results. they do have linear, digital, switching and others. After looking at a lineair version, it seems to be outputting 50% of the voltage when detecting no magnetic field, which is not desired. The output should be between the input (5VDC) and 0.

Doing some experimenting, it seems that using a potentiometer of 10K also has the desired effect (only mounting it on the throttle in a safe way would be quite a challenge).

Also (maybe this should be a separate question), what can I do to prevent the new sensor from breaking once again? According to the specs the old sensor should be able to handle 24Volts, while I'm only measuring 5 volts on my scooters throttle. Placing a serial resistor would decrease my maximum speed so that's not an option. Maybe putting a small capacitor between the input and GND would buffer some voltage peaks?

The Americans gave credit to themselves for something invented before Hall -rediscovered it.

In 1879, physicist Holzer found Holzer effect when Hall was a rookie 24 yr old and Americans made it their own invention, now called by the Hall Effect. ( ! )

Not the answer you're looking for? Browse other questions tagged sensor repair protection buffer hall-effect or ask your own question.