It is one of these and exact part number is unknown. 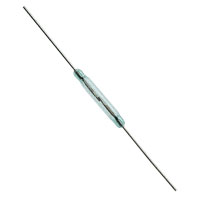 Reed switches can stick for the following reasons:

4mA doesn't sound like much current, even for switching. The lowest rated switching current value for reed switches I could find at Digikey is 50mA.

Nickel and iron used for the contacts are soft metals, which means they more vulnerable to melting. So the contacts are generally plated with a harder metal (like rhodium or ruthenium) to increase the life of the switch.)

Reed switches are made of metal contacts that have been annealed, a process that leaves no or very little magnetic retentivity. This means after the reed switch is removed from a magnetic field, there should not be any residual magnetism in the contacts. (Meder)

It's possible the reed switch is defective and is not properly annealed, causing residual magnetism problems.

Reed switches are manufactured with fairly exacting tolerances. When cutting or shaping the leads, it's possible to damage the reed or glass. Meder has a whole document dedicated to handling precautions. In short, physical damage may be difficult to verify visually, but can affect performance. An excerpt from the linked document:

Internal damage can occur with no visible signs on the seal. In these instances, seal stress has occurred, leaving a torsional, lateral, or translational stress in the seal. This produces a net force on the contact area that can affect the operate characteristics (Pull-In and Drop-Out), contact resistance, and life characteristics.

Did I manage to magnetize the contacts?

I would say unless the reed is defective (improper annealing) it is unlikely.

Is the current too large (approx 4mA)?

Without the datasheet specifics, unknown. But also unlikely.

Does it matter what magnet you use? Eg. regular versus rare earth.

No, it should not matter. The reed switch contacts simply react to a magnetic field, whatever its origin.

I was using Madison float switches operating common ice cube relays at 24 VAC and had the same problem with the switch sticking after a few years of service. The website below explained that the contacts were being welded together and gave the solution. I've ordered varistors to limit the current.

This is one of our most common failure asked of float switch manufacturers. Spiking is most often the culprit. What most don't understand is that the spikes that occur are coming along the ground from the larger device as power is removed. So in the case of the relay, if the float switch is switching the relay that is controlling a larger device, a portion or all of that spike from the larger device will travel along the common ground and hit the reed switch, even if they are not tied close to each other.

The grounds must either be separated and it is always recommended that the larger device is tied directly to a hard ground with it own wires. Additionally, the Spike suppression circuits or an MOV (Metal Oxide Varistor) can be used to clamp the spikes from reaching the float switch as shown on the Madison Company technical report.

Not the answer you're looking for? Browse other questions tagged sensor components reed or ask your own question.