Is this an SMC connector?

Can anyone identify this tiny connector? The tape measure is in inches. The connector has threads on the outside and a pin inside. The diameter is about 1/16th of an inch. I think it might be an SMC connector but I am not an expert in this stuff.

This connector is on an accelerometer. I will need to get a custom cable to connect to the accelerometer; the other end will be a BNC connector. Does anyone know what type of cable I would want to use for this? My lab mainly uses BNC cables, and they're all RG58, which is way too big for this tiny accelerometer. 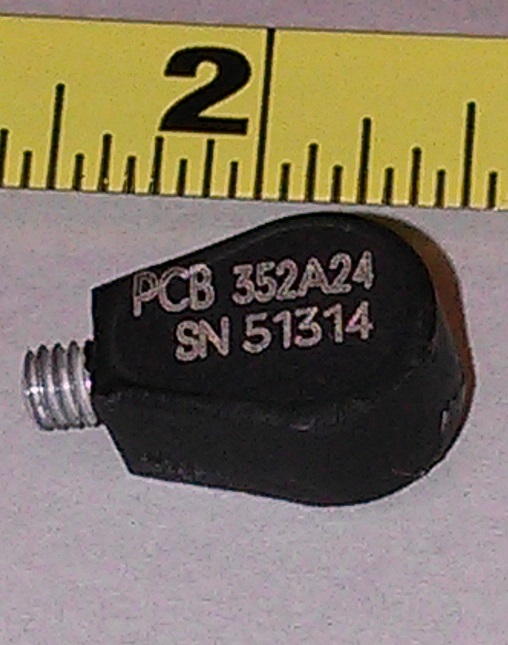 I'll add this as a new answer.
Mark & Chris are correct - it is NOT a SSMA connector.
This answer is based on an extension of what they discovered The cable designed for use with the accelerometer is shown here

If you want the "EK" connector only it is here (as Chris advised): EK connector -

IF you find an SSMA (or other connector of the same size but it is not an RP version as your is, you could make an adequately workable one off by machining down a plug (whose centre will fit your plug) and then ensuring that adequate outer contact is made. Even if this involved bonding (eg soldering) your unit to a cut down plug it would work if done well.

SSMA is a (even more) miniature version of SMA.
RP or reverse polarity is when the plug centre is a male pin rather than a socket and the outer is a male thread, as shown in your picture.

This image from Wikipedia - SMA Connector shows an RP connector (as yours is) but this is an SMA. 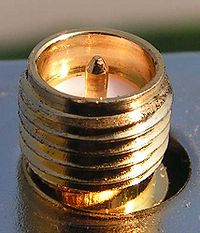 Amphenol SSMA with catalog - may not have RP

Dimension chart below from here

Notionally reverse SSMA images - MAY be of some use - note that many are not RP SSMA.

Aliexpress and similar can be a source of specialist parts - these are not exactly what you want but show that small volume sellers of semi-specialist parts can be found.
Also hgere

Amphenol may save you - or not

No. This is not an RF/microwave connector, but a special "3-56 coaxial" or "EK" accelerometer/instrumentation connector.

markrages found mention of it at:

I also find it mentioned at:

Which has pictures and specs of units of the same sort you have, though on further reading it appears they are just a distributor and point back to PCB as the manufacturer.

Contacting one or both companies would probably be the best way to track down a source for a cable or connector, which may be part 030A10.

Not the answer you're looking for? Browse other questions tagged rf connector identification or ask your own question.

2
Is this an SMA female connector?

77
How can I tell the size of a barrel power connector?
2
Is this an SMA female connector?
4
Direct cable to board compact assembly?
0
SMC vs 10-32 Coaxial Connector
0
BNC Male to Cable Connector Proper Method
0
circular connector identification?
1
Identify 4 pin Connector
0
Help to identify SMD RF Connector