Can a lightning detector's transistors be substituted with BC547 or 2N3904? 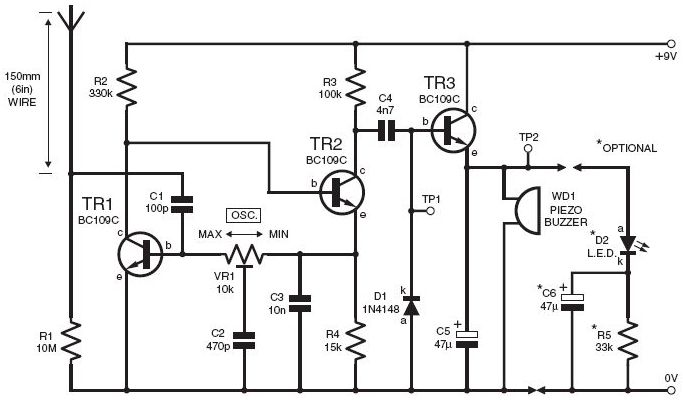 The circuit is a lightning detector.

BC107 was aimed at switching, BC109 was aimed at low noise amplification, and the distinction lives on in the BC54x series (and their BC84x surface mount replacements)

2N series probably contains a satisfactory equivalent but I'm not so familiar with American transistor series. Look for gain or hfe of 400 or more.

For the most part, yes. The BC109 is not particularly high current (200mA), high gain, or high frequency, and the circuit does not demand any of those. A 2n3904 or 2n2222 would work just fine. These are all general purpose small signal transistors.

0
What is the difference between transistor BC107 and 2N3904

0
Trouble with CE BJT amplifier
2
Drawback of RF BJTs
6
Can any BJT be used for temperature sensing?
5
Transistor PWM Generator (No ICs) for practical application
9
Can I (ab)use a transistor as an ESD protection diode?
2
How to prevent square wave oscillation circuit from producing backwards sawtooth shapes in LTSpice4
0
Why base emitter voltage (Vbe) of BJT is not showing as 0.7v in proteus simulation?
0
I want to understand this audio input to LED output simple circuit