I tried figuring the calculation for the transistor and really the maths escaped me so I just tried out a BC547 I had around. What really confused me was when the switch was open, the LED's glowed dimly. (When closed they glowed bright as expected). I was surprised as from what I'd read transistors are either full on or off. The dim glow was effected by me touching the resistor or other spots on the bread board.

If it helps, I'm actually testing this with the aim to replace the switch was a capacitive touch sensor such as this one: http://www.mouser.com/ds/2/42/iqs904_datasheet-8785.pdf

Finally I'm aiming to build this in SMD even though I'm prototyping in through-hole parts at the moment.

Any advice would be greatly appreciated.

Second, transistors are not just on/off. That's only if you use them as a switch, in saturation mode. They can and are designed to have a wide range of use.

Third, when SW1 is opened, you leave the base pin and resistor floating. It's neither 0v, or 5v, ie "Off" or "On". It can float between the two, and cause the transistor to switch on. Basically like a little antenna.

Fourth, you have the floating pin and resistor on a breadboard, which has high capacitance. It acts like a capacitor, storing then releasing energy when it can, which is why it varies when you bring your finger near the resistor. Again like a little antenna.

Try adding a 10k resistor after the 100Ω resistor, to ground. This creates a weak pull-down, which will turn off the transistor unless the SW1 is closed, which will override it.

As for the specific IC you linked to, they essentially do the same. Instead of a NPN transistor, the "typical use/reference design" they provide uses a N-Channel Mosfet, but includes a 180k pull down (lower left). A NPN like you have will work just as well, BUT they don't list a maximum current that can be sourced from the load pin. I'd assume, based on the Backlight pin (tested at 3mA at 5v with a max 0.5v voltage sag, see datasheet page 17), it's only a few mA, probably 5mA at best. You might need a high gain transistor, or a darlington pair. 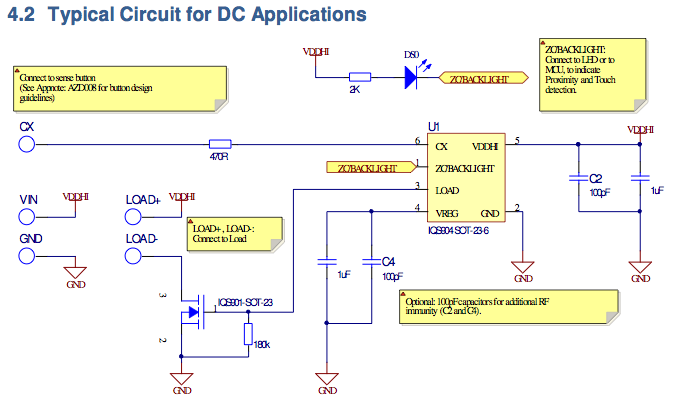 Transistors are not "either on or off" - they can also be used in a linear mode, where the collector current is (roughly) some multiple of the base current. This mode is used in audio amplifiers, amongst many other things.

In this case, to ensure that your transistor truly switches off, you need a resistor from base to ground (emitter).

Not the answer you're looking for? Browse other questions tagged transistors capsense capacitive or ask your own question.

5
What kind of transistor do I need to amplify an Arduino's PWM outputs?
2
How to wire in my TIP120
6
Using capacitors for flashing lights
0
What type of transistor would be required?
5
BC547/BC548 with 5V at base can't control 12V at collector-emitter?
2
boiler switch transistor
3
Switching bjt transistor with photodiode
1
Water level indicator with PNP transistor
0
Toggle bi-colour LED
1
IR Detector with two indicating leds