I'm trying to design a current source that can be adjusted from 0mA to 25mA (for an input voltage of 0V to 3V) using a dual P-Channel FET (NTZD3152P).

I've based my design on some PMOS current mirror circuits I've found online but with the addition of the adjustable input voltage. Will the attached circuit work? If not, why and how can I fix/improve it? 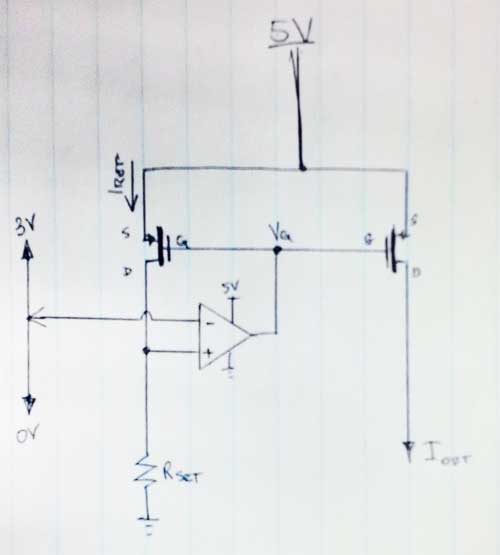 I've built this circuit using the LMV931 for my opamp. I've also added a 150nF capacitor between the gates and my non-inverting input, however I'm seeing a lot of oscillation on the non-inverting input and output still. I can increase the cap the further reduce the oscillation but I don't want to mask a fundamental design issue. Any ideas on how to fix this? I've included a quick sketch of what I observed.

I think your problem is that you're loading the output of the operational amplifier with a too big of a capacitive load. These operational amplifiers are generally two pole systems, where the dominant pole is generally caused by the internal node of the amplifier, which has a very high impedance and a capacitor over the second stage to compensate the amplifier. When you add a 150nF capacitor to the output, the nondominant pole at the output will be pushed closer to the dominant pole, reducing your phase margin considerably. However, I was not able to find anything about a maximum capacitive load specification in the datasheet, except in the foreword, which they claim the opamp can drive a 1nF load with a 600Ohm resistor in parallel.

I'd try to lose the capacitor completely, and see how it behaves then.

Your circuit looks like a good first-pass approximation. When you get into actually selecting parts and building the circuit, there will certainly be more to worry about.

Not the answer you're looking for? Browse other questions tagged current pmos or ask your own question.