What's radiating on my PCB?

I recently did a proper EMC test on a PCB of mine. It failed the test, and seems to be radiating in the 300MHz - 1GHz region, with peaks every 50MHz, and little peaks on the 25MHz. 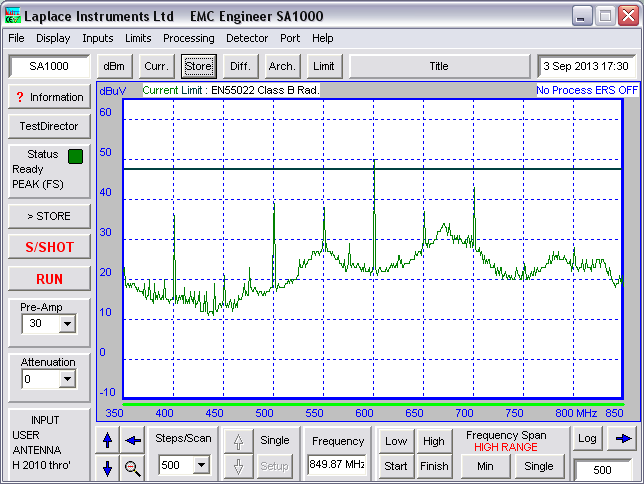 Looking at the near field, you can clearly see lots of 25MHz harmonics around: 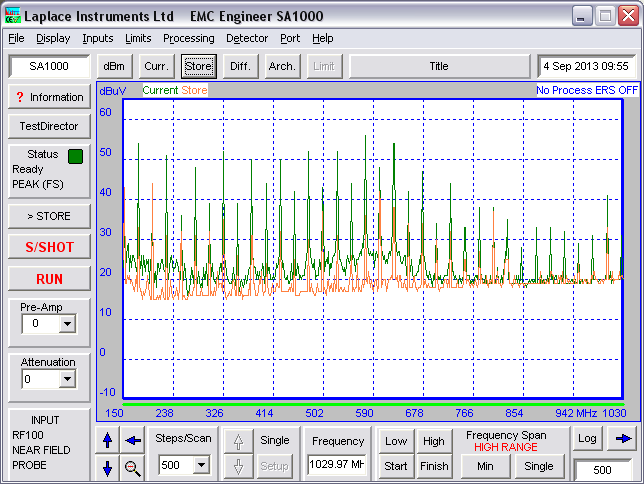 The board contains a 25MHz crystal, which must be the source of the signal, but the question is, what on the board is radiating? What could the antenna be? Candidates I can think of are: 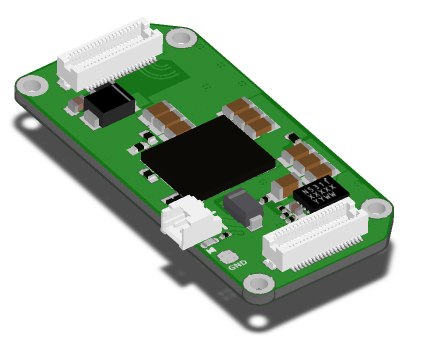 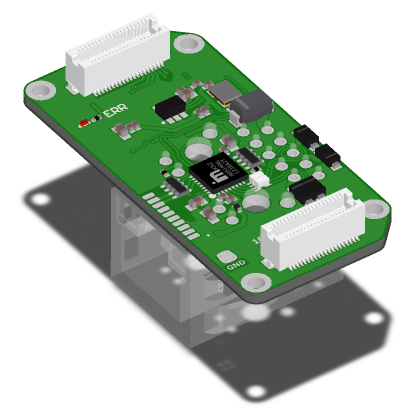 Question for bonus points: How can it be that there are clearly lots of 25MHz harmonics around in the near field, but only 100MHz and 50MHz harmonics are detectable in the far field?

This is a difficult problem to cover in a couple of hundred words, so this will be brief and you'll just have to do some research on your own. But I'll try to summarize it enough so you at least know what to research.

You need to know about trace impedance, signal termination, signal return paths, and bypass/decoupling caps. If you got these absolutely correct then you would have zero EMC problems. Getting it 100% perfect is impossible, but you can get much closer than you are now.

The larger the loop area, the more RF problems you will have. Not only will you emit more RF than you want, but you will also receive more RF.

If a signal starts on the top layer then goes through a via to the bottom layer then the signal return path will want to switch from the gold to cyan layers, at the point of the via! This is a major function of decoupling caps. Normally one plane would be GND and the other would be VCC. A signal return path can go through the decoupling cap when switching between planes. That is why it is often important to have caps between planes even when it is not obviously needed for power reasons.

Without a decoupling cap between planes, the return path cannot take a more direct route and so the loop area increases in size-- and EMC problems increase.

But voids/splits in the planes can be even more problematic. Your gold layer has split planes, and signal traces, which create problems. If you compare the red and gold layers you will see how signals cross the voids in the planes. Every time a signal crosses a void in the plane then something is going to go bad. The return current is going to be on the plane, but it can't follow the trace across the void so it has to take a major detour. This increases loop area and your EMC problems.

You can place a cap across the void, right where the signals cross. But a better approach would be to reroute things to avoid this in the first place.

Another way the same problem can be created is when you have several vias that are close together. The clearance between the vias and the plane can create slots in the planes. Either decrease the clearance, or spread the vias out so a slot does not form.

I hope that helps. I really breezed by the issues but that should get you going.

Having re-spun my board, the noise seems to be significantly reduced. I made quite a few changes, so it's difficult to know exactly which ones were responsible. Basically, I copied the EMC precautions used in the Beckhoff EtherCAT modules

As for what's actually radiating? It's hard to be sure, shielding the ET1200 itself didn't seem to help. Nor did adding ferrites to the cable. The only thing that did help was enclosing the PCB in a metal box. So I guess it was something on the PCB. Perhaps the ground plane acting as a centre-fed patch antenna as Olin suggested.

I think the 25MHz harmonics point to ethernet related issues. I am not familiar with Micrel recommendations, but most other vendors recommend a minimum distance between phy and magnetics, which isn't apparent on your board. Also, there is a continuous ground plane underneath the magnetics, which also isn't recommended most places.

It is rather difficult to tell with the layout pictures, but it looks like the trace that runs underneath the phy then strings out and comes out as a nice antenna on the opposite layer. This could be confirmed with some near field probing, perhaps?

Things that show up in the near field and not in far, mean that there is no effective coupling path and antenna for that frequency, in my understanding.

Are you absolutely positive you have everything bypassed right? I had an emc tester tell me he had one board that went from not passing to passing because they had missed one bypass cap. You could also make sure your bypass caps are working the way you want at 25MHz. Use a spectrum analyzer with tracking generator and a 50 ohm stripline with caps solderered onto it, and see how they really are working.

I think David Kessner's answer is still worthy of consideration. I don't feel like we really have complete enough information here.

I think the very best would be to rent an hour or two with an experienced emc tech(maybe you have one inhouse), and absorb everything he tells you about your board.

Not the answer you're looking for? Browse other questions tagged pcb emc radiation far-field or ask your own question.

5
Crystal Harmonics EMC Failed
1
What's the most effective way to prevent EM noise from coupling onto a cable and radiating out?
4
How to detect far field noise outside of a certified EMI lab?
5
PCB design - signal loops
3
EMC Testing, Radiated Emissions
2
Are input filters always required for switching power supplies?
0
What's the "dirt" on this pcb?
4
What could be generating this waveform in an EMC Compliance test?
2
Understanding RF spectrum of SMPS power supply