I have a VBus of 12VDC. I would like to take 14 discrete inputs and Light a single LED for each input that is active.

I was planning on just doing a simple current limiting resistor and having a common anode and allowing the inputs to switch ground.

A new requirement was added: If any of the inputs are active they want to switch on a 500mA load on. (ie a buzzer or light). I would most likely do this with a NFET.

I would like to try and do this as cheaply as possible.

If i use a micro then I need to generate 5v. I could probably do a micro / powersupply / and either optos or resistor divider for the inputs this would cost around $8.00 per board.

Can anyone suggest any easier / cheaper way to mux the LED inputs together? 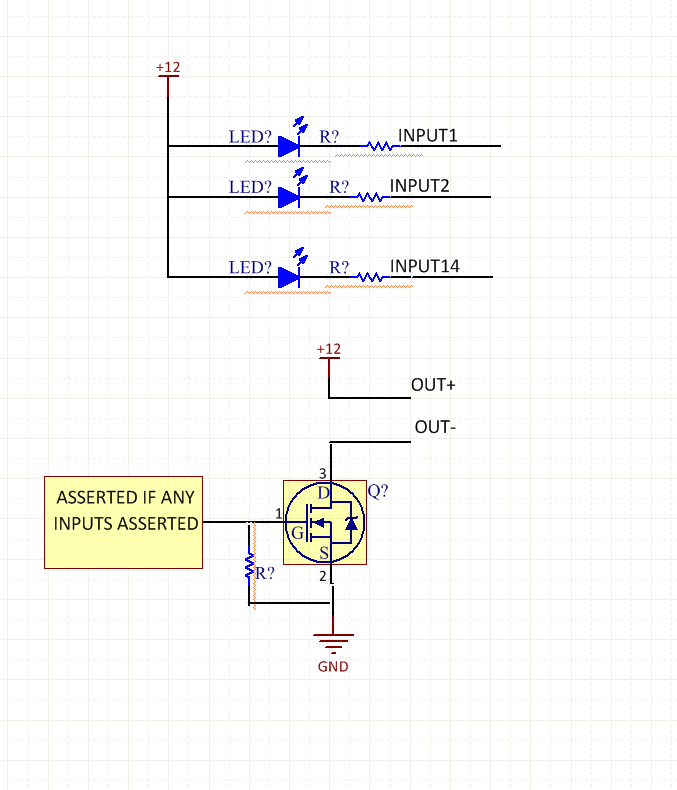 If I understand correctly you're still using each of the signals to drive the LEDs and need to combine them to turn on a single buzzer or light. You can do this with buffers (or inverters for active low signals, not shown). Simply pass each signal through a buffer and combine the outputs to drive the single load device. A discrete component view might look something like this: 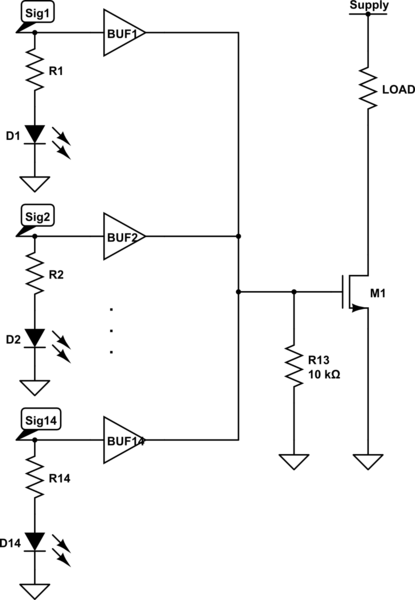 You can use three CD4050Bs (HEX buffers). This will provide easy expansion for up to 18 inputs (I would put them all on the PCB and, for now, only populate the 14 that will be needed). If your signals are active low, use three CD4049UBs (HEX inverters) instead and hook up the LEDs as you've drawn them in your schematic.

I am assuming (a bit difficulty understanding) that you want 14 LEDs, one for each input? You could use something like this:

Just use 4 of them, they're cheap and reliable. Mouser has some that run 6 drivers off of 12V, but I would go with the 7457 as I have had a lot of success with it.

edit: Because you want one for one, you really don't need a MUX.

If I understand you correctly you have 14 switches, one side to ground, the other side to a resistor, then a LED, then 12V. So when you push a switch, the corresponding LED lights up.

Now you want to add a buzzer that buzzes when ANY switch is pressed?

Just connect 14 diodes, each diode connects to a switch and (all together) to the buzzer, other buzzer wire goes to 12V.

1
Sourcing parts with standard geometry
0
Basic 12v LC Filter for Video noise reduction
2
Identifying components in an electric fencer output board
1
Disc-Shaped Component with two contacts
0
Control 12V relay with 3,3V
1
What does an ideal phase response look like for a single port SAW resonator?
0
Is there a light sensor that varies output with wavelength?
3
Why would ALU Output be Asynchronous with Input Change?